A few days after we returned home, my neighbour from two doors up knocked on the front door.  She said she had a little New Year's gift for us. 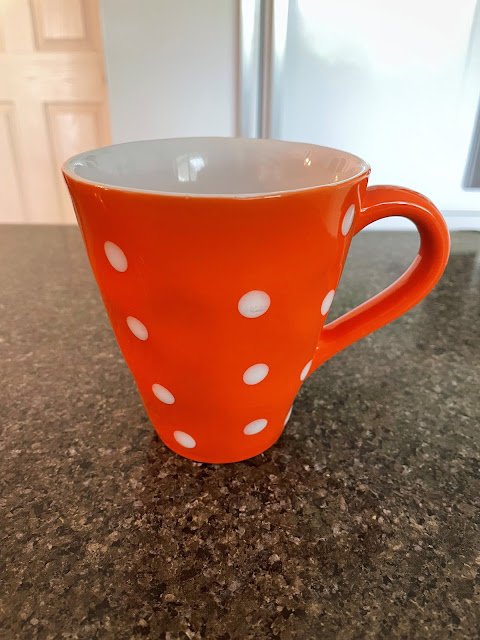 You could have knocked me over with a feather when she produced the elusive orange mug.  It looks like it has never been used.
For anyone who has read my blog for a while, this will be something you are familiar with, but I'll tell the story anyway........
Years ago, at Girls Day in the Country, the mug I was given was orange with white spots. (I just checked - it was 2012 - I can't believe it was that long ago.)  Mick quickly claimed it as his own, as he likes orange......it is a bit of an ongoing joke.  Anyway, this was part of a popular range of crockery, so we added mugs in green, yellow and purple and matching bread and butter plates to go with them as well.  Nice and cheerful to use for breakfast.
After a couple of years, Mick's mug got a crack and we replaced it with another one, as, like I said, it was a popular range and you could find them anywhere.  Then, a few years later, his mug got a chip.
By then, the range was not in the shops, so the quest was on to find a replacement somewhere, probably in an op shop, or a gift and homewares shop in a small town.  We were rather surprised at how hard it was to find one.  Friends were recruited, girls who were at the same day at Nundle were seeing if they still had the mug, even Lou in NZ was on the hunt. We looked on ebay, (although that wasn't nearly as much fun as searching for it on our travels), but no luck.  This has been going on for nearly four years!!!!!  Over time we have found duplicates of all the other colours and tucked them away in the back of the cupboard and Lynda from Brisbane has found some red ones, if we really had no luck. 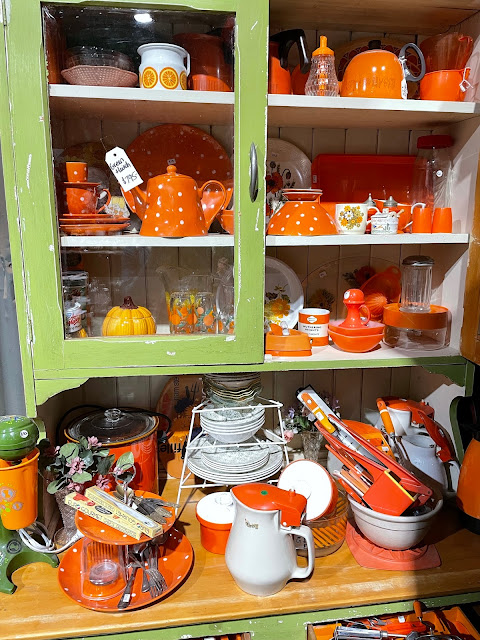 When we visited Forbes in October, there was an antique shop with loads of orange items in the range.....everything except the jolly mug!
Back to my neighbour...... She has been on the lookout in op shops, but was looking on ebay for some splayds.  She found some splayds and the seller also had the mug, so of course she bought it.  I think she was nearly as happy as us.
You know what?  Even though we now have the mug, I think we will always be on the lookout for the range.  Also, I reckon we will find them everywhere now.  That is just Murphy's law.

What a fun story to read!! It is amazing how and where we find things we are on the hunt for.

How good that your neighbour finally got the elusive orange mug….
I’ve even looked in op shops over here…..

Huzzah! What a terrific neighbor!

Wonderful news, the elusive mug has been found!!! Well done by your neighbour.

I feel like I should be doing a little dance! I'm not a big op shopper but I always looked when I was in one.....
Well done to your neighbour!

Such a fun and feel good post ... cheers to your neighbour :)

How funny. I remember having an everything orange kitchen when first married.

Congratulations on your find! I have a friend who works part-time at night cleaning offices, and one evening she dropped and broke a mug from someone's desk. It was the lady's "honeymoon souvenir," and she was heartbroken. We found a duplicate on eBay for $25 (!), and the lady was happy. Two weeks later I found the same mug at a thrift shop for 49 cents. You just never know.

Good that you have finally obtained the mug after so much searching. While I had an orange kitchen when first married, can't say that I have ever seen crockery like that.

It's fantastic that you finally got your hands on one. What excuse will I give now when Tony asks why I visited the op shop??