One Monthly Goal and a Fun Weekend

As usual, the end of month was fast approaching and I still hadn’t completed my goal for the month, so time to get stuck in and get stitching.
The perfect timing for Chooky to announce that yesterday she would be hosting another of her Zoom sewing days, this time to join her in celebrating the 10th birthday of  “The Chook Shed”, her wonderful sewing space. 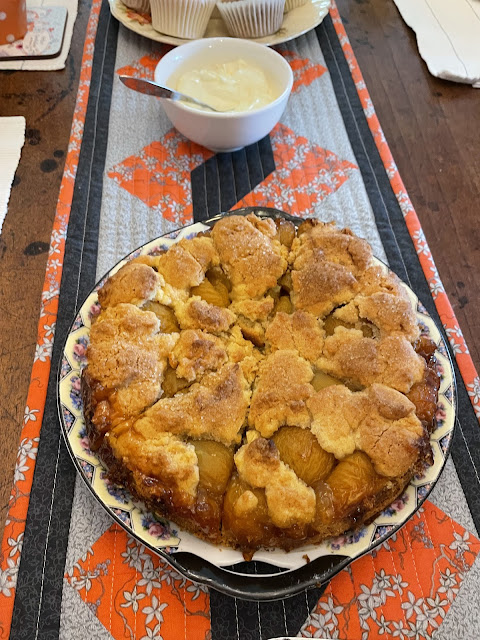 I popped in and out through the day, as Mick and I had the very important job of cooking the birthday cake.  This year it was an apricot shortcake. This is a tradition that dates back pretty much for the whole time there has been Chook Shed birthday parties.  We cook the cake and get to eat it too.  Chooky only gets to see a photo. Before this photo was taken, the cake was presented to the Zoom girls, complete with sparkler.  I wasn’t able to get a photo, but it went down well.  All a bit of fun. We then had some friends visit for afternoon tea, so they helped us eat it and it was deemed to be a success.
So, what did I work on? 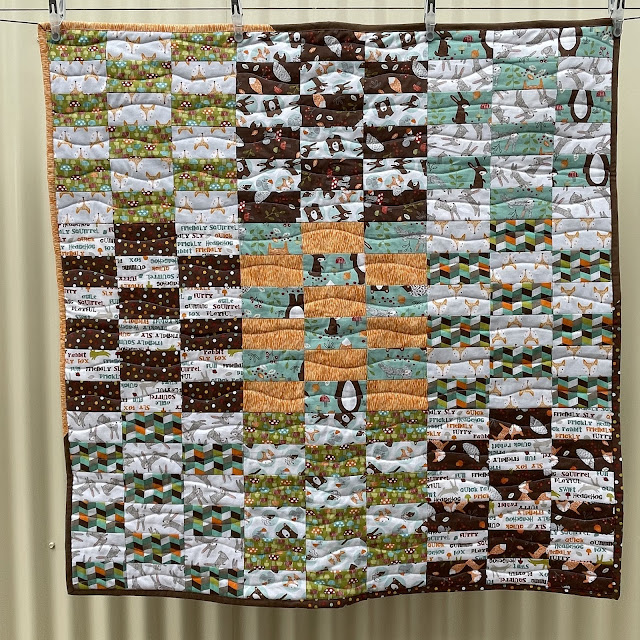 Firstly, I added the binding to the baby quilt that was my One Monthly Goal for May. It turned out that quite a few of the girls on Zoom were stitching down bindings.  However, I was the only one using the machine.  Not my favourite way, but as this is something that I expect will be washed lots, it will be more durable. 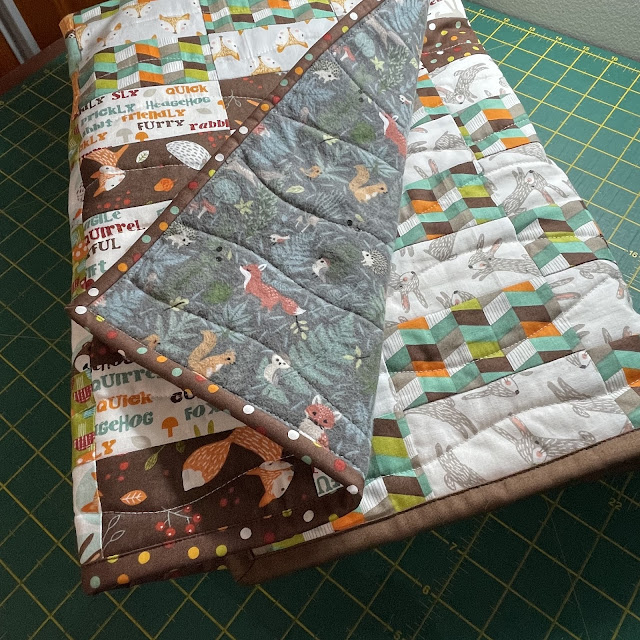 Once again, I just used a free form wavy line across the quilt for the quilting. The backing is flannelette with a woodlands theme, which ties in nicely with the fabrics on the front.  It is a lovely, soft, drapy quilt.
I know I have Monique, my big quilting machine sitting there, but until I get the tension sorted, it was easier to quilt this little one on my Janome.
It will be going to my next door neighbour to give to her grandson, who is due to be born in August.  Job done in plenty of time.
This means that my OMG has once again been reached.  I’m linking up with Elm Street Quilts.  The encouragement and accountability works so well for me. 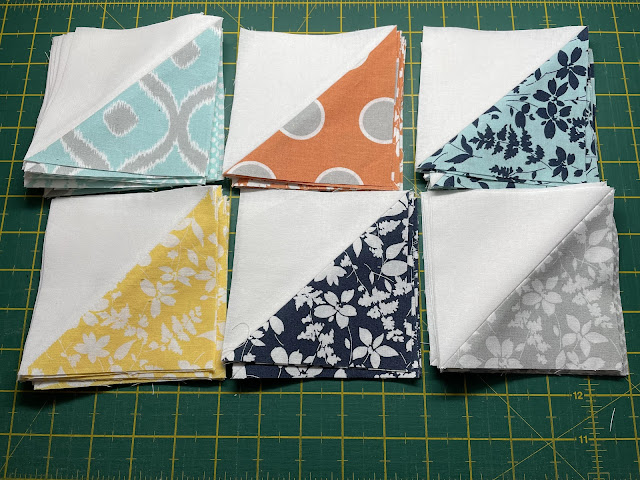 Next, I pulled out the half square triangles that I had stitched at Scrub Stitchin’ as leaders and Enders and trimmed them down to size.  They can now sit patiently in their tin until I am ready to play with a layout and create a baby quilt from them.
Finally, it was time to dive into my stash of Civil War fabrics that I already had, as well as those in the “Stash Enhancement” from last month.  You see, Chooky has recently completed a churn dash quilt, which attracted lots of positive comments, and she has decided she wants to make another one.  A few girls mentioned that they wouldn’t mind making one as well, so now there is a stitch-a-long taking place, with 28 of us joining in.  It starts in June, with us making the blocks over four months and the fifth month is to put the quilt top together.  I am making my quilt a bit wider than the pattern, so need 41 blocks.  That means 10 blocks each month.  I’d better get some chain stitching happening. 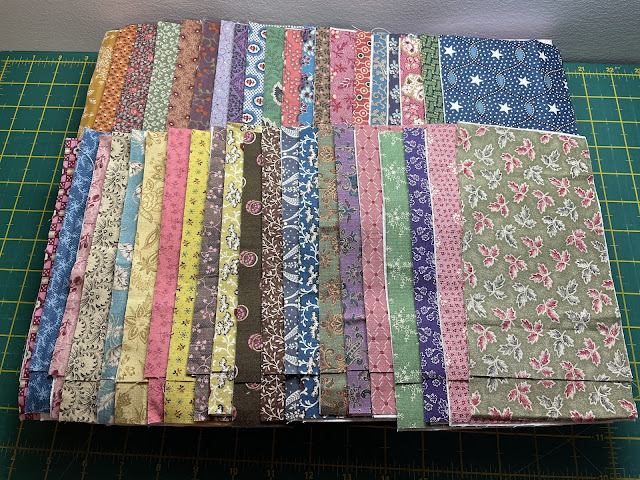 I just love all the rich colours.  It will be a nice wintery quilt. 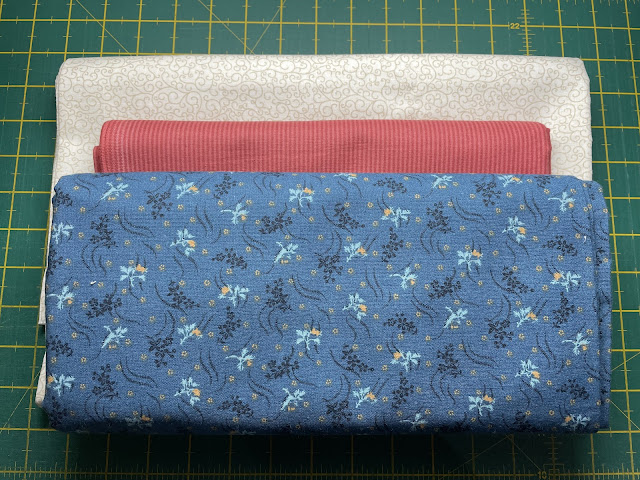 I did buy the background fabric, as I didn’t have enough of any one fabric.  It was a wide back on special at Spotlight. I’m not really sure what I will use for the sashing and setting triangles. This is the best option at the moment, using the red for the sashing and the blue for the setting triangles, both from my stash.  Who knows, I may come up with something else.
We will be away for much of the time, so I wanted to get the blocks cut out, ready to stitch each month, even when we are away in our caravan. I will be taking my baby Elna Stella with me.  Mick has a solar panel on the ute, complete with an inverter to provide enough 240v power to charge batteries and the like.  We have worked out that it will be sufficient to run my sewing machine, so we could be set up in the middle of nowhere and I would be able to use my machine.  How good is that. However, I wouldn’t be able to use an iron, so would just have to finger press, use the generator or wait till we have proper 240v power.  I’ll make it work.

The weather is going to be rather cold this coming week, with snow forecast on the hills around Oberon, Blayney and Orange, so today seemed to be a good day to make a pot of soup from a pumpkin we bought from a roadside stall on our recent holiday. 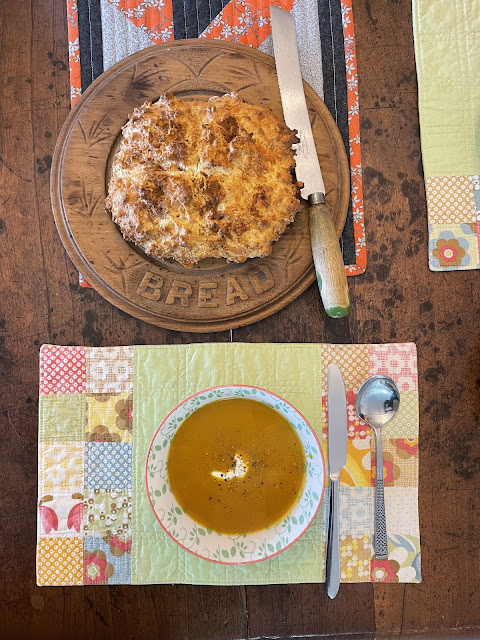 I’m not generally a fan of pumpkin soup, but really like this recipe.  While it was cooking I was browsing a recipe book from Eugowra that I was given for Christmas, which had a pesto bread recipe to accompany soup.  I don’t make bread, but it reminded me of a recipe for cheese buns that I haven’t made in years.  They go so well, served warm with soup.  This time I just made one big bun, pretty much like a damper.  Yum, it was a lovely lunch.
When I was seeing how much room there is in the freezer to freeze some of the soup, I noticed a tub of crumble, so suggested Mick pick some rhubarb for rhubarb crumble tonight.  He came in with a nice big bunch and said there is heaps more.  I suggested he pick a lot, as it will only go to waste over the winter. 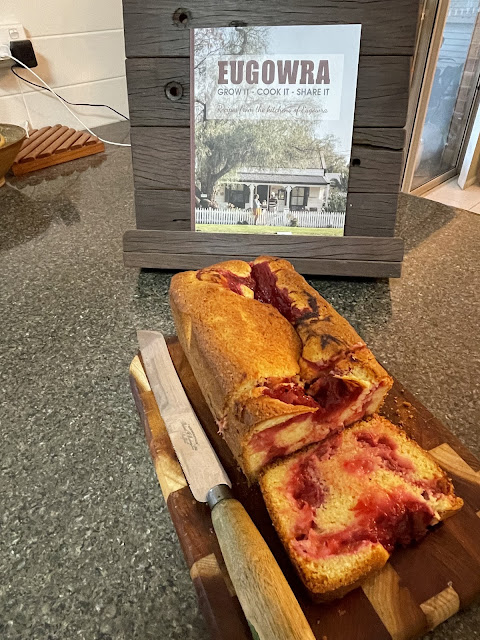 I kept browsing the recipe book and came across a recipe for Rhubarb Swirl Cake, so we had to give it a try.    It was supposed to be iced, but we liked the look of it without. I generally add a drop or two of red food colouring to rhubarb to make it look a bit more appetising. I may have added just a wee bit too much this time, but it looks pretty. 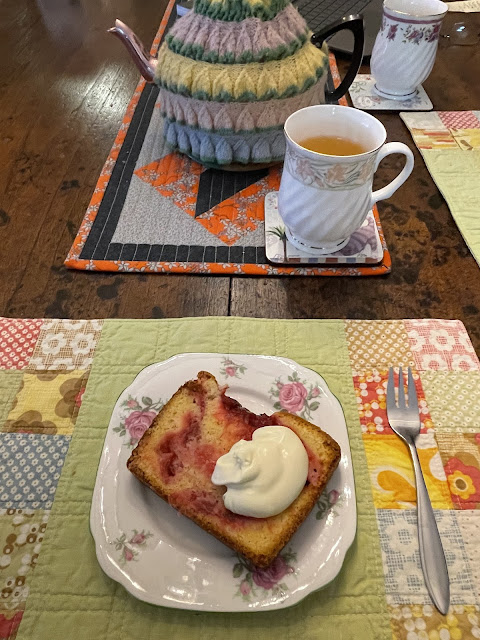 It was rather lovely for afternoon tea, while still a little bit warm.  We’ll mark that recipe as a keeper.
I think the rhubarb crumble will wait for another day, with the rhubarb just being frozen, now that it has been cooked up.
If you had told me first thing this morning that I would have been doing so much cooking, I would have laughed at you, but it was a nice way to spend some time, and means we have some easy meals through the week.

I was happy that the cake was "served up", sparkler and all, while I was with you on Zoom. That was a fun surprise. I was binding my mini for a challenge on another blog. I often machine bind baby quilts, because they can take a beating!
My churn dash quilt is also going to involve 41 blocks. I'm planning on 10 blocks per month as well--but won't complain if I get ahead. I say that because my tendency is to fall behind and give up. So if I can go against my norm this time around, it will be delightful! I do like your fabric choices.
All of your kitchen creations look yummy. Hubby loves rhubarb desserts, but since his Mom passed he doesn't get them as often as he'd like.

Yummy.. I just love rhubarb. Thanks for the tip of adding red food colouring

Nice simple pattern for the baby quilt , the quilting looks great and cosy backing.
The HSTs will make a cute baby quilt.
Lovely fabrics for the Churn Dash SAL. I do like the fabrics for the sashing and setting triangles….
Lots of delicious cooking.

You and Mick achieved a lot during the zoom session, and it looks like you were a winning team again today. Care to share your cheese bun recipe?

You've been quite busy! It was great seeing you at the birthday party, I do love listening to everyone talk. The baby quilts are lovely, sure to be a big hit with Mum and Babe alike!

So much delicious cooking.... The best birthday cake once again can't out weight on with that one here ... Lol the sparkler was a great addition......... You did great with all the cutting and the baby quilt is lovely........

Wow Janis I wish I was at your place. the cooking looks amazing and yummy. Love the baby quilt too, very cute fabrics

Mmm, pumpkin soup, fresh bread, rhubarb cake, it all looks delicious. Some days are just lime that, busy in the kitchen. Enjoy your upcoming trip away in the van, sewing machine and all! Sounds like fun to me.

Love the wavy quilting - perfect for a baby quilt. Lots happening there Janice - the rhubarb cake does look good - clever idea about the food colouring.
For your "finger pressing" - do you have one of those roller things that you can use?
just as well you can sew while you are away from home - else those blocks may not get done...41?? - well why not?

and as Lou says - will you share your cheese bun recipe?

the churn dash blocks are promising to be lovely! i tend to get in a cooking frenzy in august and september so i can relate...cute little baby quilt, should hold up well!

Sorry that I missed the birthday cake. It does look delicious as does the rhubarb swirl, soup and cheese bread. What time did you say lunch was? You have some lovely fabrics there to work with and a pretty soft baby quilt finished. Well done.

Lots of lovely baking in your house Janice, and your fabrics for the churn dash look fantastic.

Congratulations on the OMG finish. It's a cut quilt. Love those wavy lines. Sounds like a fun time and good food!