One Monthly Goal and Other Sewing Stuff

Back at the beginning of the month I had to decide what to work on for the OMG for March.  After much umming and aaahing I decided to work on a very old Medallion Quilt UFO.  You can read all about it and see where I was up to back here.

This month has been really busy for us, but I still was able to get into the sewing room. 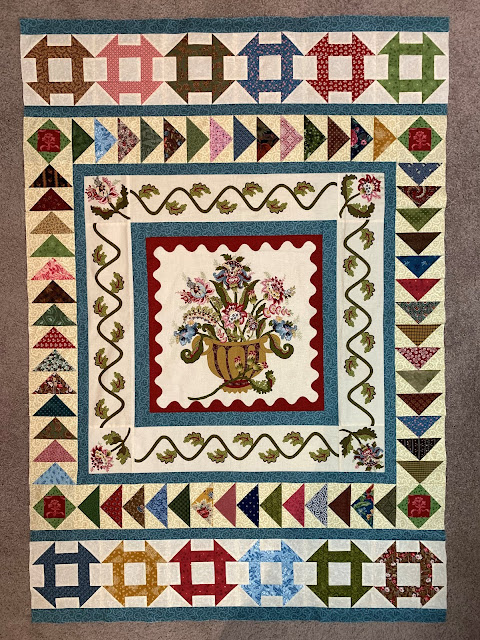 I had those twelve churn dash blocks completed by the 10th of March.   Goal met in plenty of time.

I had originally intended to make this quilt for Mum for her double bed, but obviously that didn't happen.  Now she is living in aged care, hence the change of plans to make this to suit a single bed.  I fiddled and faddled with ideas for what to add next, knowing that I had a patterned fabric to use as a final outer border.  The more I looked at it the more I thought that it just needed that final border to be the ideal size for her bed. 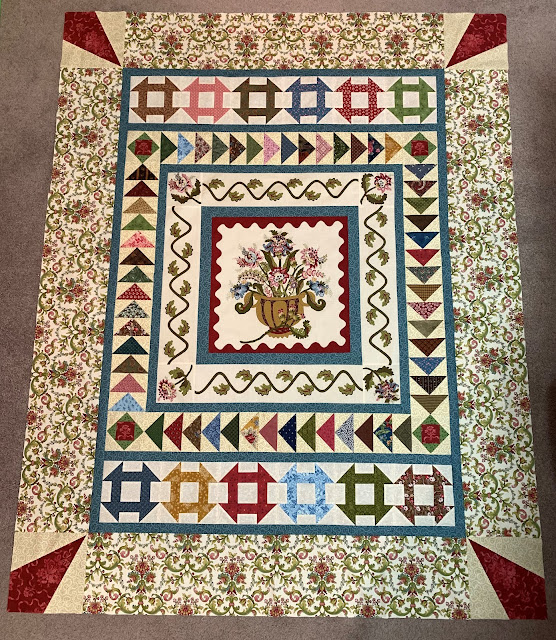 Well, the top was completed on the 10th of March as well.  I was on a roll.  A quick call was made to my friend Val to see if she would be able to quilt it before the second week in April.  That way I could add the binding when I was at the retreat.  Yes, no worries.

A bit over a week ago, Val called to say that she had finished the quilting, so I popped over and picked it up.  She did a lovely job.

Seeing as the quilt came back so quickly, maybe, just maybe, I could get it finished this month?

I had originally planned on adding a green binding, but changed my mind to using the same red as on the corners, as I still had plenty left.

A couple of days after that I pressed the fabric.

On Thursday I cut out the binding, joined it into one length and pressed it.

On Friday I attached it to the quilt and hand stitched down one side.

Yesterday I did sweet nothing.

Today I finally finished sewing down the other three sides, finishing at about six o'clock this evening. 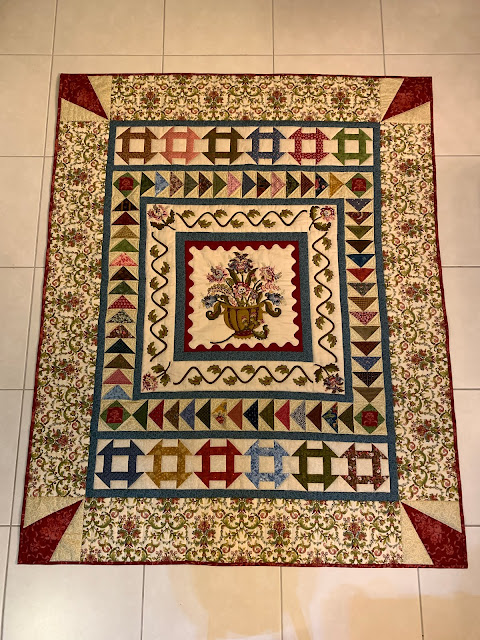 A goal is really good for someone like me who works by "Just in Time Management". 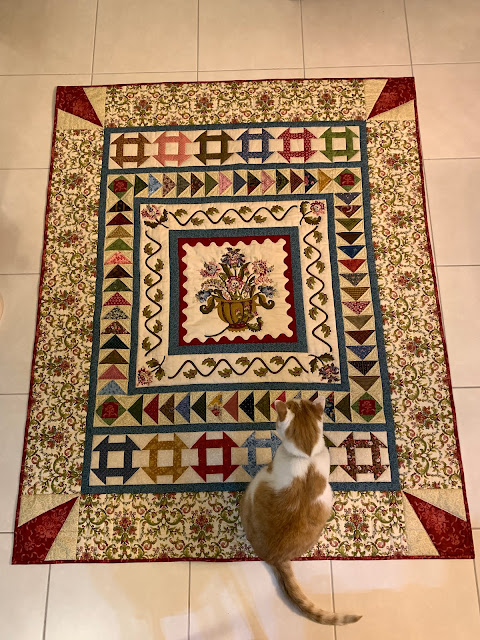 Of course, as soon as you put a quilt on the floor Joey has to check it out.  Quilts really are a cat magnet. 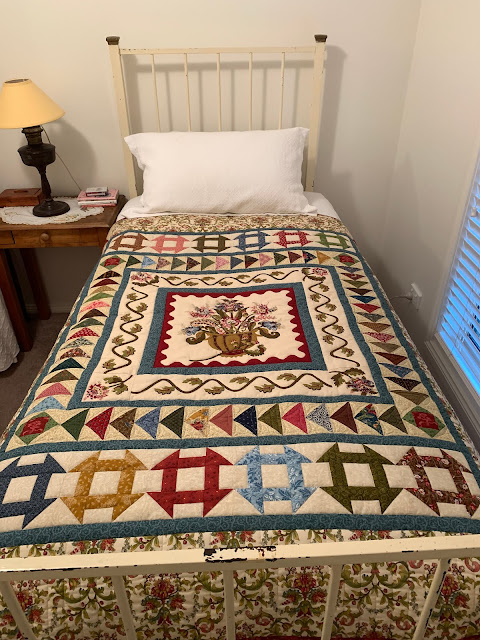 Next, I had to see how it looked on a bed in our spare room.  I think it will do.  The colours in this photo are much closer to real life than the two above.

I am so happy to have this quilt finally finished.  All the fabric I used was already put aside for the quilt, except for the backing, which was in stash.  There is actually a small piece of that fabric in the flying geese, so it ties in well.

Now, I just have to get it all wrapped ready to give to Mum for Mother's Day.  I do hope she will like it.

In my post at the beginning of the month I also mentioned that I had a couple of other sewing plans for the month.

1. Make one Splendid Sampler block each week. - Tick - I actually made seven blocks, rather than my planned four.  I also prepared some more for retreat next month. 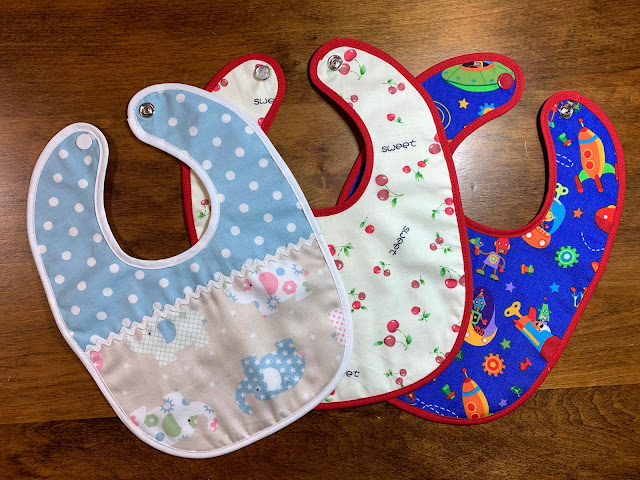 2. Finish off some bibs for the church fete craft stall.  Tick (sort of) - I had three finished and had three that just needed the snaps added, plus I had a few that needed the bias binding added.  I added the clips, but didn't get any further, so three more finished and some given to the fete. 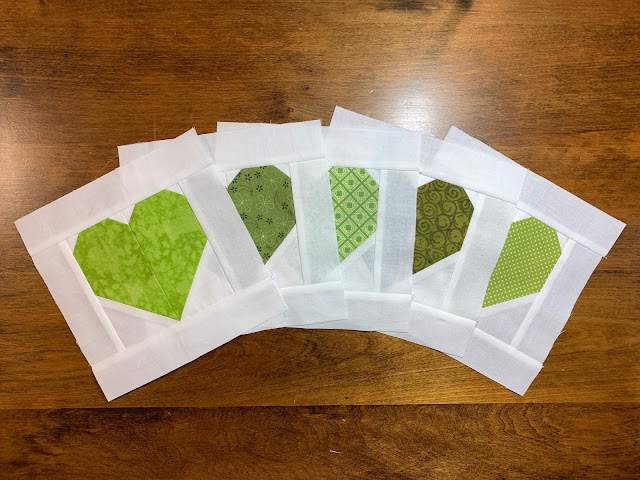 3. Make my green Rainbow Scrap Challenge blocks - Tick - all done and posted here.  However, I have some bonus green blocks that have been made to contribute to quilts for the victims of the  recent tragedy in Christchurch.

4. Have at least one finish for Kris' One Project a Month - Tick - I have four!  (Okay, three were a bit cheaty, but one was definitely a big finish.)

So, all in all, I'm really pleased with what I achieved this month.  The next two months will be very different, but that is all part of life.

I'm linking up at So Scrappy and Elm Street Quilts and reporting in to Tag Along Teddies.  Thanks ladies, as always, for the inspiration.

I'm sure your mother will love the quilt--it's absolutely gorgeous! That border fabric sets it off perfectly!

WOW! You were really on a roll for March...
Love love ❤️ your Medallion quilt for Mum.. the fabrics for churn dash and flying geese blocks is lovely and the border fabrics with the corner blocks just finish the quilt beautifully...
cute bibs for the fete too.

Lovely job on the quilt for your Mum!! It's a wonderful juxtaposition of scrappy and elegance. LOVE the broiderie perse leafy vine! Have no fear. She will love it, too!

Spectacular! Thanks for linking up with Elm Street Quilts One Monthly Goal and congrats on your finish.

Your quilt looks great, the red binding is perfect. I'm sure your mum will love it.

What a wonderful quilt for you Mum, I'm sure she will love it. And maybe shed a few happy tears too. You have achieved such a lot in March, congratulations!

Found you by way of Patty’s OMG group - your quilt really jumped out at me from the little icon on the group page...just had to check it out. Congratulations on a lovely finish! The center medallion is beautiful and set off by the surrounding pieced blocks. That border fabric is perfect!

fabulous quilt.... it was lovely to start with but I always love how quilting and binding just adds that extra bit to a quilt. beautiful finish and lovely little bibs
Hugz