My One Monthly Goal for August was to complete my Jocelyn Proust Quilt, which just needed to be bound. 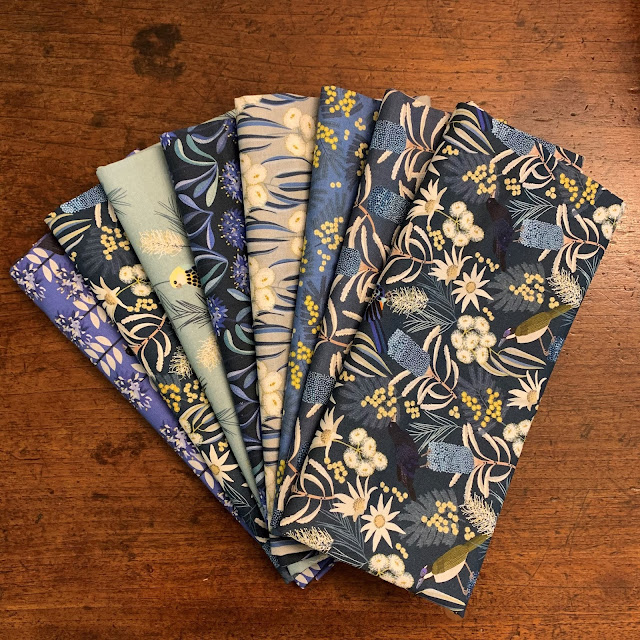 To recap, I saw these fabrics in a Spotlight catalogue back in February and decided that I needed to make a quilt from them, even travelling to Orange to purchase a couple of the range that were not in the Bathurst store.
I had no idea what I was going to do with them, but felt that it would be something that showed the prints off nicely, so with a larger block.
I saw a photo of a quilt somewhere on the internet with a block that I thought would work and quickly scribbled it down.  I have not been able to find it again, so am unable to give it credit. 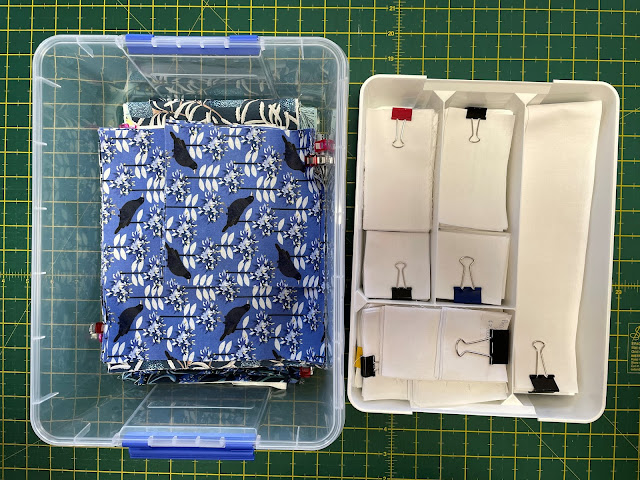 In early April I cut everything out, including the binding to create a kit to make all the blocks.  They fitted so well in my new project box.  This was my project to take to Scrub Stitchin'. 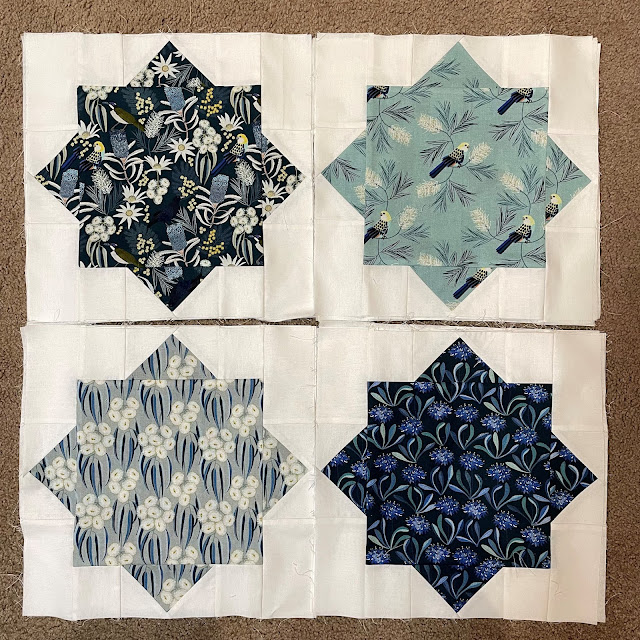 I made half the blocks at Scrub Stitchin'.
The remainder of the blocks were made over the next few months. 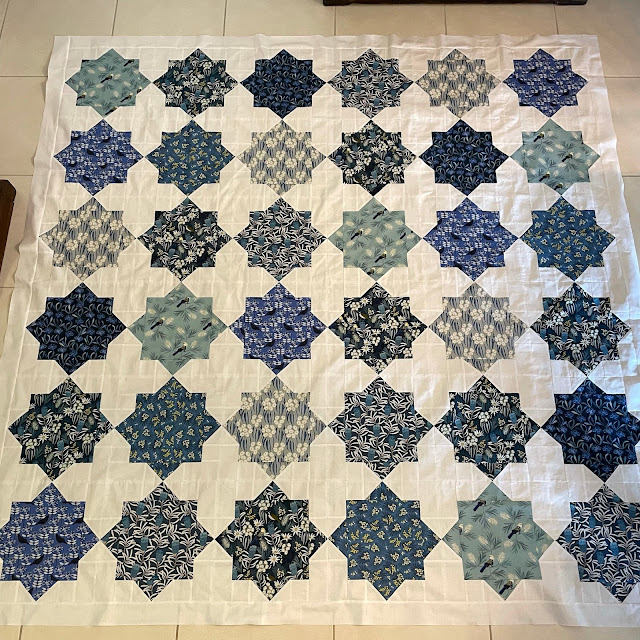 In early July I made the final few blocks and put the top together, ready for my quilting fairy to perform her magic. 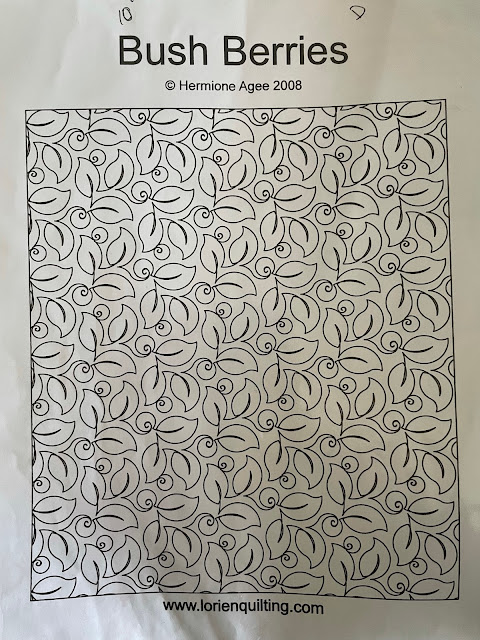 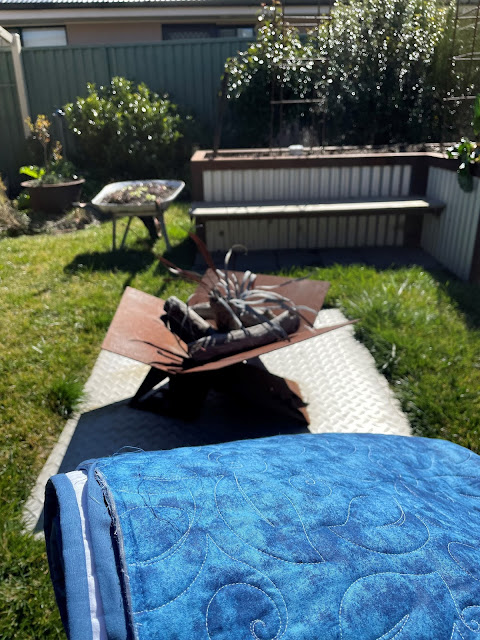 The final stitches were added to the binding while sitting in the sun on Thursday last week. 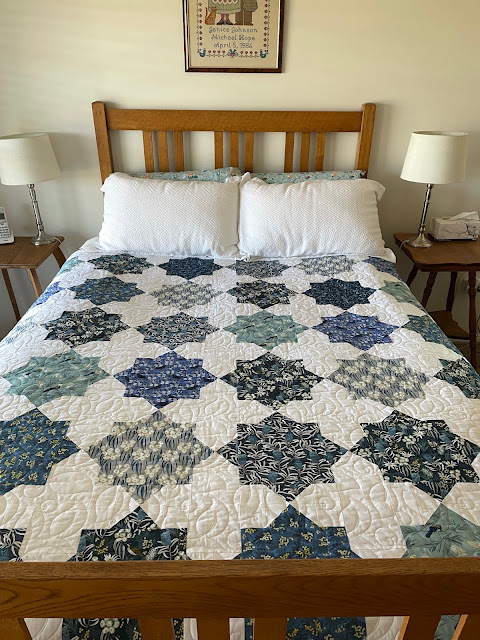 Ta da!  I'm really pleased with how it turned out.  It looks nice on our bed.  It would have been easier to add a sashing between the blocks, as there would have been a lot less bulk where the points match (or don't in some cases), but I like the secondary pattern created by the white background.
We've had "Trail Mix" on the bed for the last few months and it is amazing what a difference a different quilt makes to the room.  So much lighter and brighter.  Perfect for the coming spring. 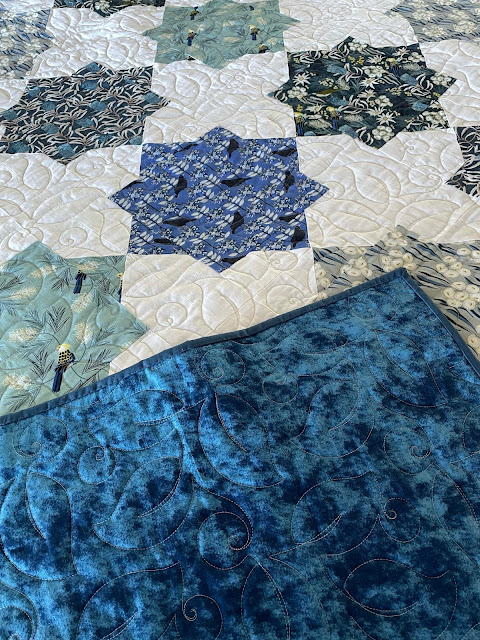 I used a wide back that tied in well with the blues and shows the quilting nicely.
I will be linking up with over at Elm Street Quilts at the end of the month.

That’s a beautiful quilt. Looks lovely. Can I have it…

A beautiful finish. You must be stoked and so very pleased you listened when those fabrics spoke to you.
You are right, a change of quilt can make a huge change to a room.
LOL at Jo's comment.

Such a gorgeous finish and the new quilt looks lovely on your bed. Definitely much lighter and brighter than “Trail Mix”

Very nice! I like the secondary pattern as well-you do such lovely work! Enjoy your new quilt.

Didn't you do well! The new quilt looks lovely in your bed, as you say, adding some Spring vibes.

It looks really lovely on your bed... a job well done... xox

That is one beautiful quilt Janice, well done on the fabulous finish.

Absoluty gorgeous.... just the perfect pattern for those fabrics .. it looks wonderful
Hugz

Every time I've seen your blocks made with those fabrics, I think what a perfect choice you have made. The finished quilt is proof of that - it's beautiful! I have found a few New Zealand themed Jocelyn Proust fabrics which I have bought, but in all sorts of colours. I'm hoping there may be a few new ones each year/season, so I can make something delicious from them one day!

I agree--I think it is better without sashing. Looks great and perfect for that bed!

The fabrics are gorgeous. I can hear them saying, "Come pet me!" Love the quilting design you used. Beautiful finish.

Gorgeous! Thanks for linking up with Elm Street Quilts One Monthly Goal and congratulations on your finish.