We had a lovely Christmas Day, with perfect weather, yummy food and family with us.  We also spent time with good friends, so a rather busy day. 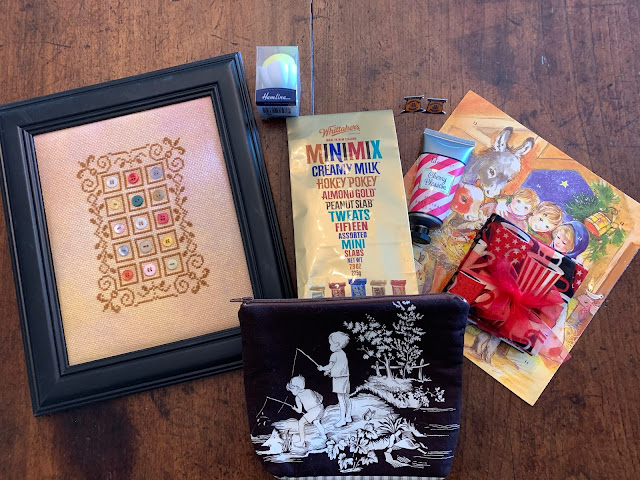 My friend Lou and I do a little Christmas gift swap each year.  She really spoiled us this time.  A beautiful cross stitch, zippy pouch, hand cream, NZ choccies, some fun coffee fat quarters, an advent calendar for next year, a tulip pin cushion with suction cap to pop on your sewing machine and two little pins.  So much loveliness. 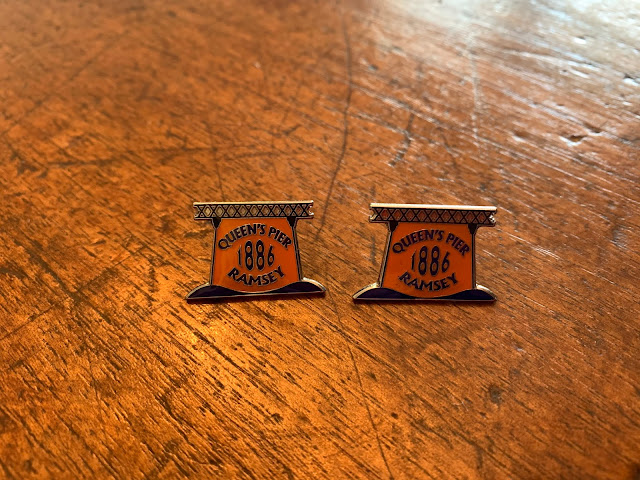 The little pins may not mean much to most people, but are rather special   Queen's Pier is a Victorian pier in Ramsey, Lou's home town and it is undergoing some much needed restoration. These are a nice little treat. 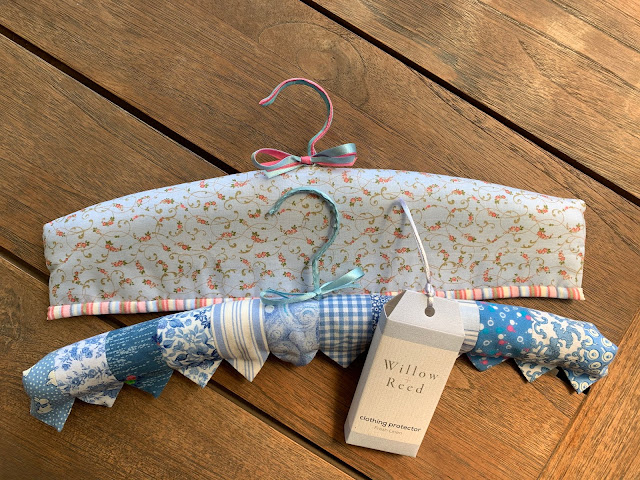 I sent off a couple of covered coat hangers.  Funnily enough, Lou had thought of a similar gift. 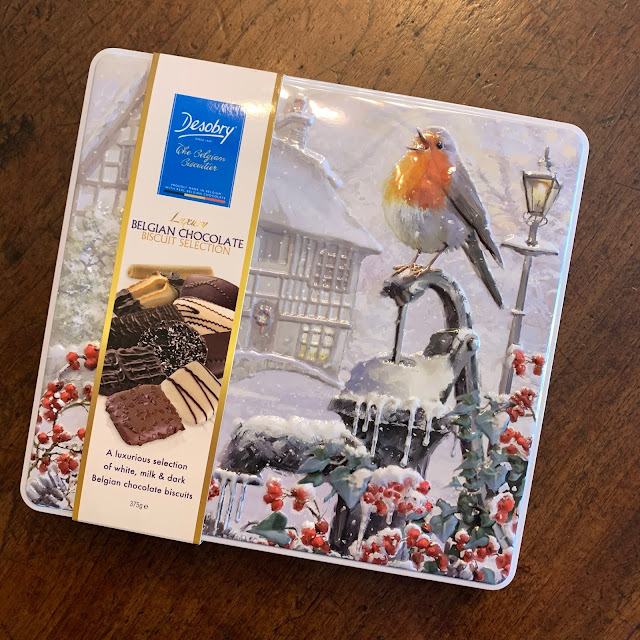 Santa brought me this box of biscuits.  Well, Santa may have brought me a really cute tin to store my Christmas projects in, that just happens to have some biscuits inside.  I'm sure they won't go to waste (maybe they will go to my waist!!??).

Boxing Day is the day where we look forward to watching the Boxing Day Test cricket and eating nothing but lots of leftovers.  Trifle features prominently.
I did make a slight detour into my sewing room and made something I have been scheming on for several years.  I knew I had blogged about it at the time. Yes, I saw a table cloth made from tea towels at the CWA stall at the Australia Day event, way back in 2010!
Since we purchased a rather large outdoor setting when we moved into this house, nearly five years ago, each summer I keep saying I should make one.  I have a little stash of souvenir tea towels, but Mum has quite a large stack that she has collected on her travels and never used.
I sorted through them and selected fourteen that were of places within Australia that Mick and I have visited.  I also chose only linen tea towels. Once I consolidated my tea towels with Mum's the tub is brim full again. 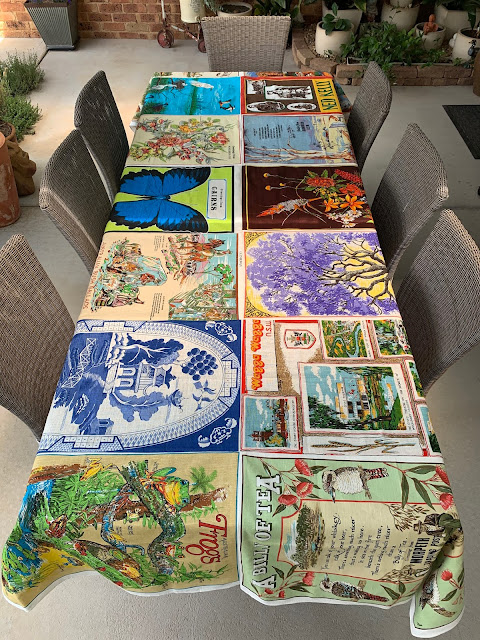 I wasn't sure how to hem the table cloth along the bottom of the tea towels, as they vary slightly in length, and in the end left them as they were, as they show a lot have information on where they were made or printed on them, which is interesting.
I saw a few versions on Pinterest and had a little chuckle when one made a plastic cover to protect the cloth.  My opinion is that you wouldn't be able to get anything more washable, as being tea towels, are designed to be laundered often.
Anyway, it was a fun, simple make and should create a little bit of interest when we sit down to our next barbecue with friends.
Oh, and it is a finish for OPAM for December.
Mick, meanwhile, had an excursion to the shops and bought himself an electric motor for his kayak.  Merry Christmas!  His shoulder is jiggered and last time he went for a paddle it just caused a lot of pain and was not at all pleasurable.  This should make it more fun for him.

Yesterday we had a day trip to Carcoar Dam, where my brother was camping with friends. 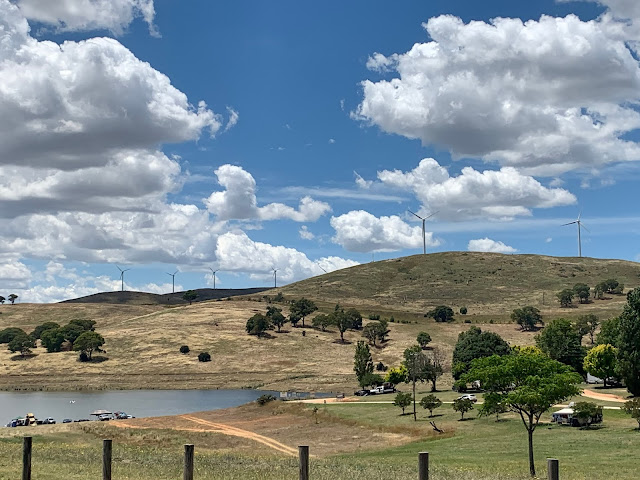 It is a relatively small dam, but rather scenic, with the wind farm in the background.  We looked down on this area from Mount Macquarie on one of our recent Friday Funday outings.  There is free camping and we were surprised that there weren't more people camped there. 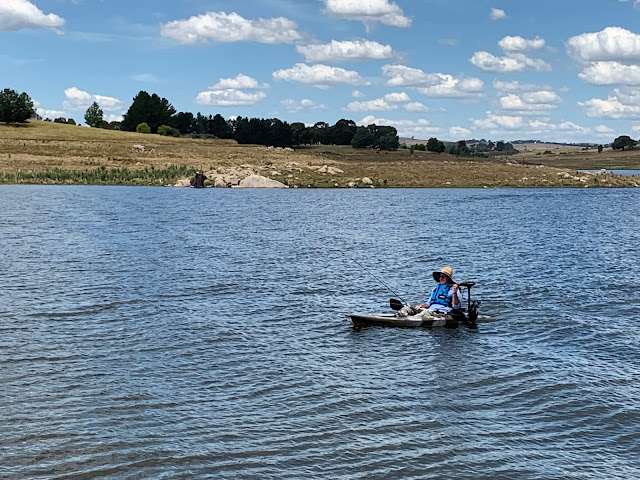 It was a good opportunity to try out the new motor.  The three fellows headed off in their kayaks, while us girls stitched and chatted. Their campsite was under some big shady trees, so it was a very pleasant way to spend the afternoon. 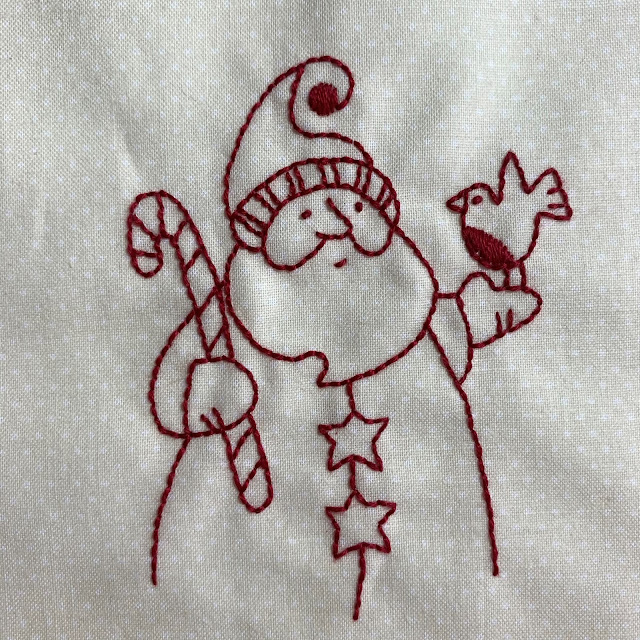 I had quickly traced a stitchery for another Christmas ornament and was very happy to actually finish it while we were out there.  Now my problem is that I can't find my favourite pattern with the template for the felt backing.  I was obviously slack and didn't put it away properly when I made one during the year.  I'm sure it will turn up.  Maybe this is the kick in the butt I need to get in and give my sewing room a big tidy up.
Once we returned home it was time to start the big job of putting Christmas away.  We don't wait till after New Year or for Twelfth Night, but prefer to get everything packed away before it becomes too stale.  A big job, but I'm glad it is done.

Today has also been rather lazy.  Each year I make a great long list of things I want to do during the break before we return to work after New Year.  Each year I barely scratch the surface.  You would think I'd learn, wouldn't you.  No worries, I won't beat myself up about it.
I have not stitched a stitch towards my December goals, other than the Santa.
Not only that, I am now looking at a new project starting in January.  Yes, another stitch along. Rhonda Dort is hosting a stitch along to make a quilt using vintage doileys, something I have wanted to do for ages. You can start to read her posts about it here.  She also has a facebook group for it 1914 Boehm House Vintage Linens Retreat. The official start date is 1 January 2021, but we have been given instructions on how to launder our vintage linens.  I have several in soaking as we speak.  I hope they come out nice and fresh.  It will be hard to cut into them, but they are not precious family ones, so that will help.
So that's where we are up to now.  Mick goes to work tomorrow for the next few days, so I think I will settle myself into the sewing room and stitch "something".  I know that most of my goals will go unmet, but as I always say, this is to be fun, not a chore.

I look forward to seeing your progress with the Vintage Linens quilt. I have a lot of crocheted doileys etc, waiting for "one day".

Love the tin Janis so reminds me of my time in Michigan in November. Snow and robins. The tablecloth will certainly be talking point.

Very interesting table cloth. A real talking point. Great post too. Hope you clean up well and get stuck into some sewing.

You have done a great job on the tea towel table cloth, sure to be a conversation starter when guests come for a BBQ.
Lots of lovely gifts, and I'm rather taken with the vintage Doiley class you will be taking. I have a pile of Robin's grandmothers crochet Doileys I would like to do something with.

Lovely gifts from Lou I love Whittaker's products. Great idea for the table cloth, we could do with something like that here for when we have a BBQ. The Christmas tin is lovely too. Nice to have a excursion to the lake.

Some lovely gifts. And I love your tablecloth...had one on my to do list for ages as well. My hubby loves his kayak motor especially for getting to those special fishing spots. The dam sounded and looked like a lovely relaxing day. I was very tempted when I read about the sew a long.....looks gorgeous but I have already bought a new Anni pattern with my Christmas money for the New Year. Looking forward to seeing your version xx

Lovely to have had Christmas with both Mums...
Nice gifts for Lou and you sent her pretty coat hangers....

That cloth will make for interesting conversations around the table. Lovely gifts given and received. Looking forward to following the progress of your new project.

Hi Janice wishing you and Mick a belated Merry Xmas ,oh wow I love the table cloth made with the tea towels it looks awesome,what a great idea. I love the gifts you got from Lou and I love the covered coat hangers that you sent her they are very pretty. Yes that tin would make a perfect sewing tin,lol. Looks like you have both been having a wonderful time,wishing you both a happy new year my friend xx

How fabulous are your linen dishtowels now in a tablecloth... and a great idea.... it;s so good to see them being used. Lovely for Mick to have the motor and it sounds like a good day for you too.... I keep an eye on Rhonda's page ... it is a lovely idea and I look forward to seeing yours grow... they are beautiful....

Happy New Year to you and Mick

The tablecloth out of tea towels is a brilliant idea. I think it would be a great conversation piece. 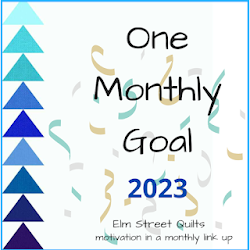 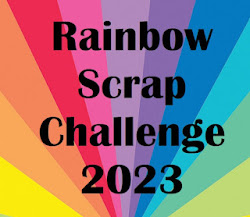 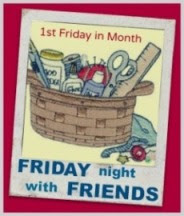