Killing Two Birds With One Stone

Firstly, I have finally made something for this month’s Early Bird Christmas Crafting and it will fit the bill for Judith’s challenge of only using two colours with a cream. 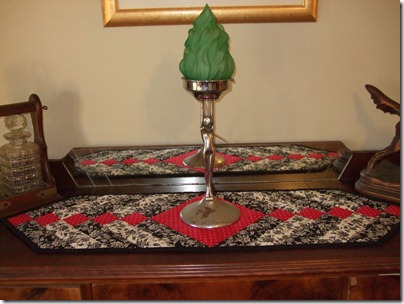 There is a story behind this runner.  When I was cutting out my black and cream quilt (yes, I will finish it soon….) I made a boo boo.  I cut a heap of strips 8 1/2” long instead of 10 1/2”.  Oops!  A quick trip to town solved the problem for the quilt but I have quite a few extra strips.  This has used some up and I think it looks pretty good.  Mick liked it as soon as he saw it.

Now to the second bird.  Today is Tuesday – Treasure Day.

Have a look at the other things in the photo of our dining room. 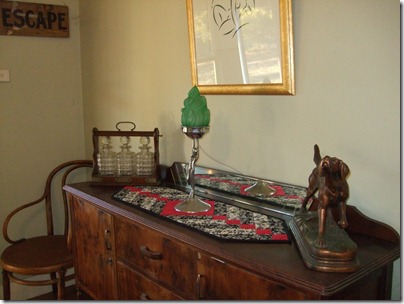 As it turns out, everything in this photo is a special treasure.

I’ll work my way through them.

Firstly, the “Escape” sign was rescued from the little country hall in the village where Mick grew up, before it was to be sent to the tip.  Much better than “Exit”. True county quirkiness.

Below the sign is a very special chair.  When my grandfather bought his farm in 1910, he only had one chair.  The other seating was apple cases.  Whenever he had visitors he always offered them the chair, but no one would sit in it.  It was his special chair.  He died long before I was born.  When I was a child it was in the apple packing shed, looking somewhat forlorn, and I always dreamt it would be mine one day.  It eventually came our way and was brought back to its original condition and is much loved.

The sideboard was Mick’s grandmothers.  We received the phone call from his aunt not long after we were married advising that it was going to the tip, did we want it?  You bet we did. We also ended up bringing home his grandmother’s firescreen as well.  It was already in the trailer to go to the tip.

Mick remembers that there was always a china German shepherd dog sitting on one end of the sideboard, but we have not been able to track it down.  The dog we have found is a lovely old plaster one that matches the one on the firescreen, so it is pretty special.

The decanter set was found at Vinnies by Mick’s mother some years ago. She paid a whole $10 for it!  What a bargain.

The naked lady lamp was one of early auction finds when we first started haunting auctions and garage sales well over 20 years ago.

And finally, the painting on the wall was our house warming gift to ourselves.  We built our house ourselves and it took two and a half years.  We found it just after we moved into our new house and it was just perfect for the dining room.

So there you go.  Far too much information I’m sure, but I couldn’t mention one item without telling about them all.

What great treasures, Janice. I enjoyed hearing the stories of each one. The tablerunner is lovely and suits grandma's sideboard.

All such great treasures but I especially love the chair story . Thanks for playing .

Oh no, no too much info Janice,
I love your tableunner and using up bits and have loved reading about your treasures and what they mean to you both.
A really great post!!

Such an enjoyable read. you have some lovely treasures!!!!!

Your table runner is great - what a good use of 'mistakes'. I loved all your Tuesday treasure stories..... It is so nice to have these around and they are all beautiful pieces..... Hugz from Bubz

Thanks for sharing all your treasures. I loved visiting.

the chair is great!
and that table runner is just lovely! isn't it fabulous when you can make something so nice from a mistake?
xox

Wonderful treasures and the runner is really very nice !

Lovely treasures, and the stories that go with them. Treasures to be sure. Love the side table runner - very effective colours and a great use of what you have!