A Mid Month Catch Up

It's been rather a topsy turvy month so far.
On the Tuesday before the long weekend I developed some pain in my upper abdomen and into my chest.  The pain in my chest scared me a bit, so I went for a little ride in the ambulance. After several tests, it was determined that my heart was fine.  The challenge then was to establish what was causing the pain.  In the end they found that I have several gall stones.  Great! Not!   At least it is better than heart issues.  I will meet a surgeon at the end of September to see what he wants to do.
We were supposed to go away in our van on the long weekend, but me not feeling well created some doubt about that.  Then, the day after I was in hospital, it snowed all around the district.  It didn't snow at our house, but the higher parts of town were white from Wednesday afternoon through until Friday morning.  There was rain across a wide area of the state, including the destination for our proposed trip.  We were going to have to travel on some dirt road, and all unsealed roads in that area were closed due to the wet weather.  Therefore our trip was cancelled.
In a way it was a good thing, as my job share colleague couldn't get to work on Thursday and Friday due to the snow, so I ended up going into work and Mick ended up working as well.
The weather has continued to be cold and bleak.  Winter has really arrived with a vengeance.
Despite all that, I have still managed to get some stitching done. 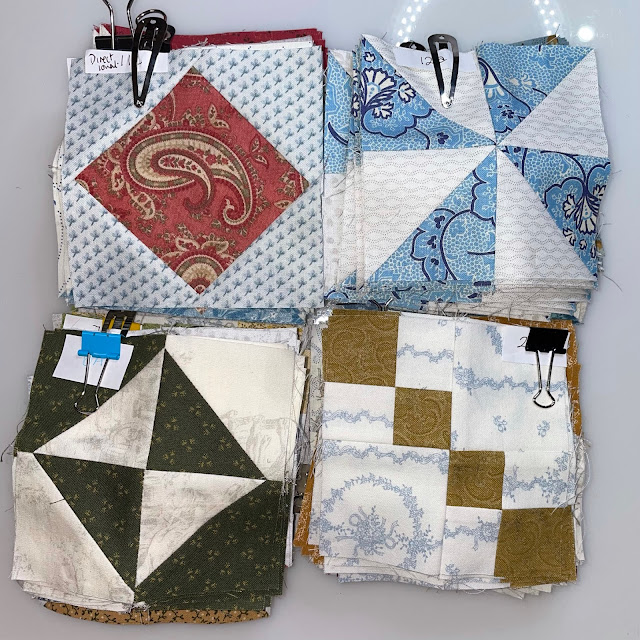 I have completed all my blocks for the Laundry Basket Mystery Quilt.  There are 225 blocks here.  Mind you, some are just a plain square of fabric. 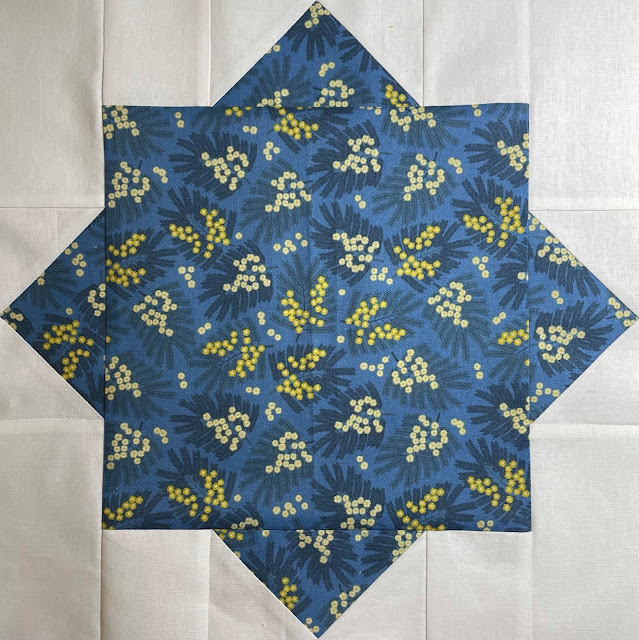 I have completed my five blocks for the Jocelyn Proust quilt. (They are all the same.) 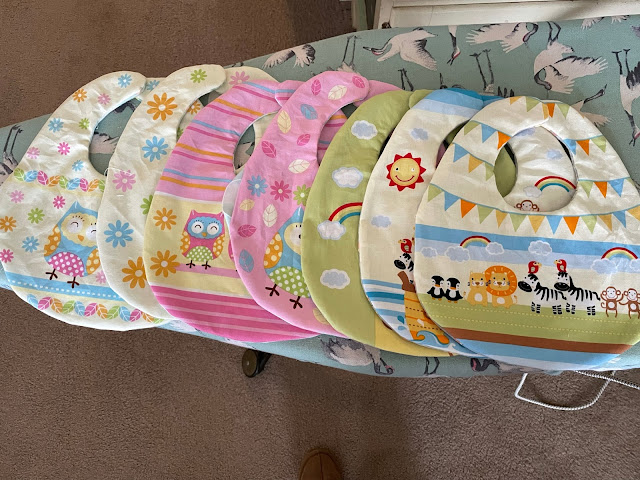 I'm making good progress on my bibs from the pre-printed panel.  I have eight ready to just add a snap and they will be done. 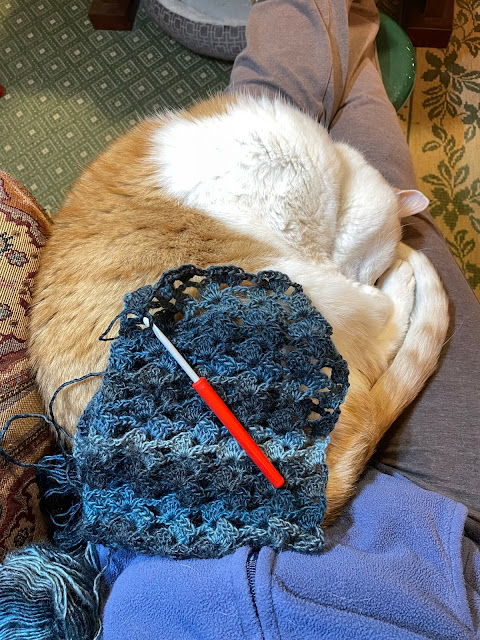 I've made a good start on my crochet scarf.  Joey is a great help, as you can see.  I had originally chosen a different pattern, but it had a four row repeat, and I like my crochet to be rather mindless, and therefore relaxing. This pattern fitted the bill nicely and still gave a similar effect. I have now completed my ball of yarn and purchased a second to make it longer.  I rather like how the pattern and colour flow is looking.
I've read two books as well. 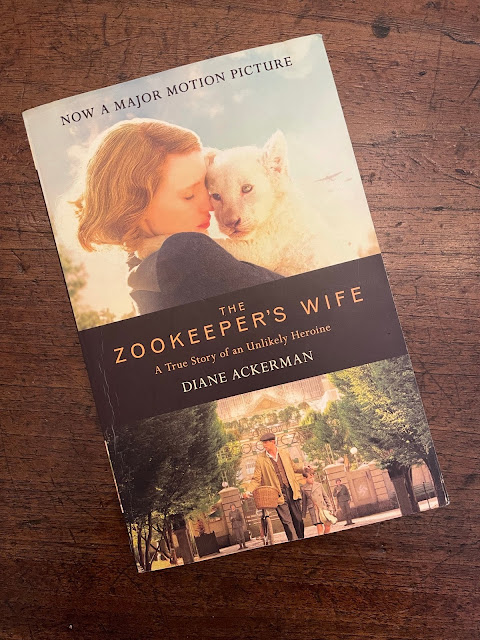 The story is about the Warsaw Zoo during World War 2 and it's keeper. It's not often I say that I would prefer the movie to a  book, but I think that would be the case with this one.  The general story is good, but it goes into a lot of detail.  Excellent if you are a student of WWII Europe, but it did slow down the story. 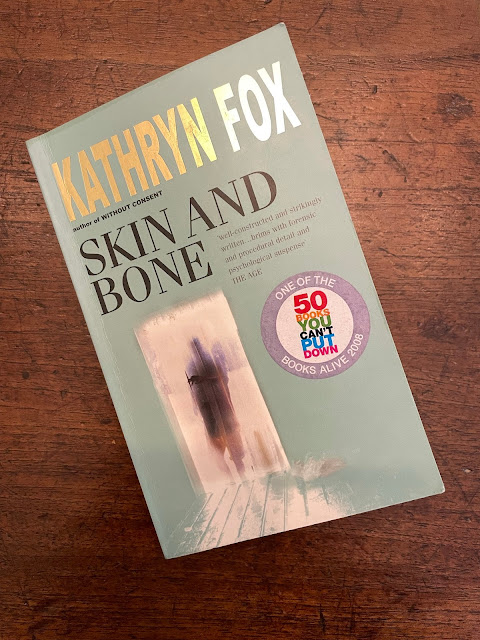 The second is a good old whodunit.  Like most of the books I read, it was a random find at a op shop, or book exchange or something.  It is set is Sydney and the lead character is a female homicide detective.  Not a bad read.
On Thursday morning we had our first COVID-19 vaccination jab.  We both had the Astra Zenica version.  Funnily enough, on Thursday afternoon they announced that they now prefer to give the Pfeizer version to those under 60.  Oh well, at least I have had something.  We both felt rather doughy on Friday, so I was glad I didn't have to go into work and could just laze around the house. Our second shot is not until early September.
The rest of the month will still be a bit topsy turvy, as we have an unexpected little trip coming up.  Fingers crossed that the latest COVID -19 outbreak in Sydney doesn't get much larger than it currently is and prevents travel.
Hopefully, I will be back at the end of the month with all my stitching goals ticked and other random bits and bobs to share. 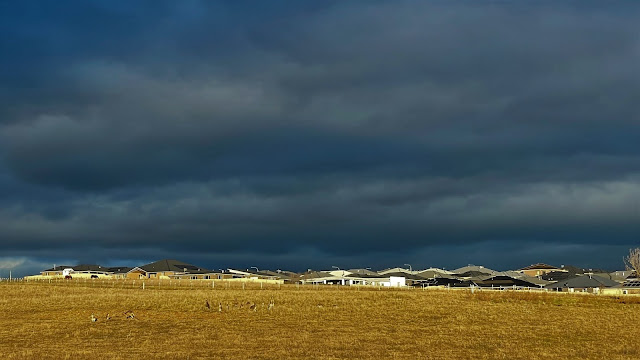 Mick just called me out to see the kangaroos over the road from our house.  There are sixteen roos in the mob. The photo doesn't do the scene justice.  The sky is inky black and the roofs of the houses sparkle. However, I don't think there is more rain on the horizon just yet.

Great catch up.
Thankfully your heart is good.

Pleased all good with your heart but gall stones aren’t good either…….
Good to have worked on your projects and having read your top books…
Enjoy your break away.

Hope you do not plan on anymore rides in ambulances soon. Glad to hear that the problem has been diagnosed. You took advantage of alternative plans and achieved a lot in the sewing room. That sky looks very threatening.

That pain of gallstones is bad...as soon as you described it I knew since I have recently had it... mine had to be removed but I waited nearly a year managing the pain attacks. at least you know what it is now. I love all the sewing you have done.. those bibs are very cute.... quite a striking picture with the roos and the storm on its way.
Take care...
Hugz

So glad it is not your heart, and hope the gall stones can be sorted soon.
Joey looks settled there and you are making nice progress on your scarf.
You seem to have achieved loads and we are only part way through the month.

Good luck with the gall stone removal(?)( I think they can break them up using ultra sound???)

I think you got far colder weather than we had. We saw pictures of the snow on our TV news.
You've made great sewing progress. Stay safe My friend.

Love that last photo Janice it is very dramatic. Not good you had to have a ride in the ambulance but good to find the problem is not your heart and it is fixable. You have lots of wonderful projects happening.

Lots of sewing progress there in spite of your health issues, look after yourself. Love that dramatic sky photo

An ambulance ride is not a good thing - but I am glad to hear your heart is OK - but Gall stones can be painful - so I'm told...fortunately never had that problem.

You have still been very productive, the crochet is really pretty - like you I like it to be a bit mindless...my square blocks keep me happy that way!
Seems strange to hear about snow in your part of the world - but it has been a bit cooler than normal all over.

Take Care - I guess September is a way off yet - so hopefully no more attacks.

Always NiCe to catch up... but NoT good reading about the gall attack...
Hope you feel better until the doctors visit...
Good luck with all those projects too...xox