If you had told me in late November that I would be making a Cherry Pie, I would have replied "Yeah, sure....whatever you reckon!"

That was until we attended some Christmas markets in town late on the Sunday morning.  The markets had been going since Saturday morning and a cherry vendor had some cherries that had been sitting on ice all that time and were getting past their use by date. The price was $5 for two kilos.  What the heck, we'd buy some and do something with them.

I thought there may be a cherry/olive pitter somewhere in the deep dark depths of the miscellaneous kitchen drawer - the one we all have, right?  There was.  So, after pitting them all and searching for recipes on Pinterest, I got baking and we had cherry pie for dinner. 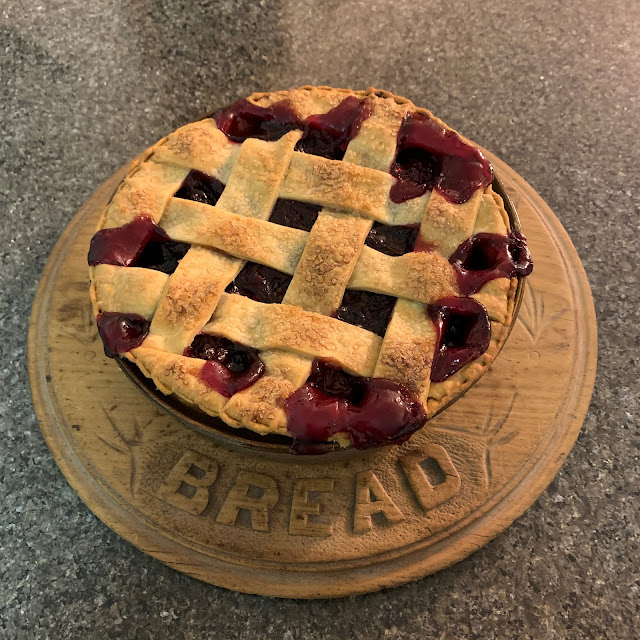 It was SOOO GOOOOD!  When we were kids, Mum used to preserve cherries in the Vacola bottles and they had a very distinct taste from the seeds.  The secret ingredient in the pie filling was a tiny bit of almond essence and there was that same flavour.  I do admit that I used frozen pastry.  The pie did not last very long at all.  The best bit is that the other half of the pie filling is sitting in the freezer waiting for me to make another one.

If you had told me last Wednesday that I would be making marmalade I would have given the same response as for the cherry pie.

That was until Mum called to tell me she had been given about a kilo of cumquats at a Christmas party she attended.  My first thought (but not spoken) was "Mum, you live in aged care, what are you going to do with cumquats?"

She rather sheepishly said "I thought we might make some marmalade."  Mum has made loads of preserves over the years.  She doesn't enjoy a lot of cooking, but this is a definite exception to the rule.  So, of course, on Thursday we started the process by cutting the fruit and putting it in the pan to soak overnight. 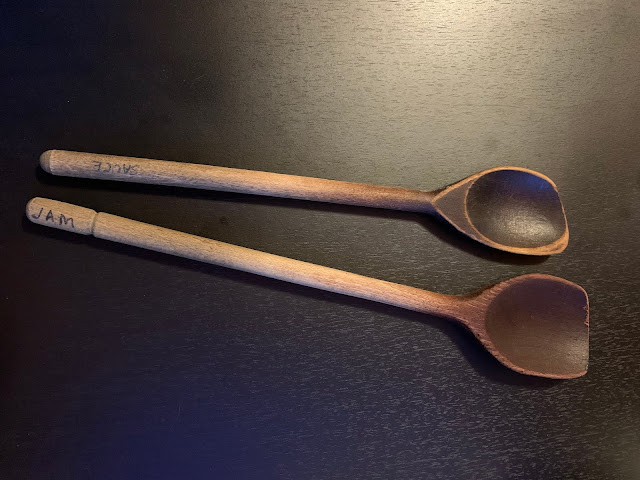 I was even able to bring out her jam making wooden spoon to use.  She has always had one for jam and one for sauce, so the vinegar taste from sauce and pickles doesn't taint the jam.  Look how much they have worn down over fifty years of making preserves.  I know they are a strange thing to keep, but they have so much character.

On Friday we completed the process.  Mum did a lot of supervising and teaching, as, although I have made quite a bit of jam over the years, I've never made marmalade.  I'm not that fussed on eating it, and it seems like a lot of mucking around. Mick on the other hand, loves some marmalade on his toast.  He happened to arrive home in time to have a bit of a stir and help with the decanting into the jars.  He also did the washing up.  Bonus! 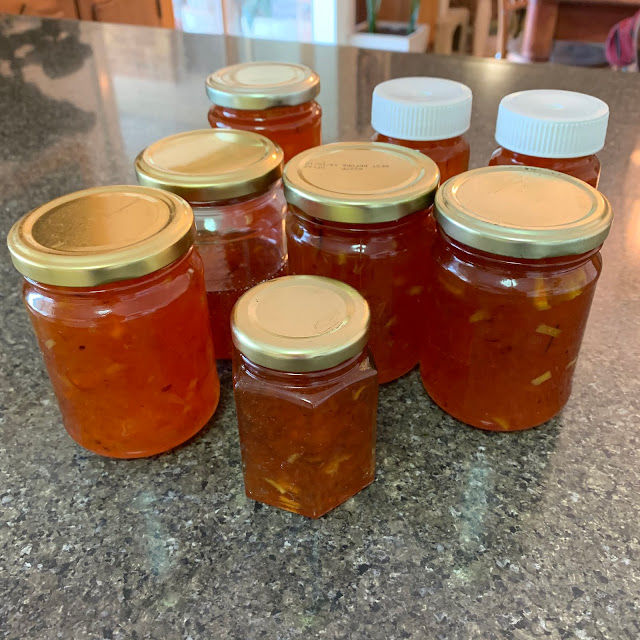 We ended up with eight little jars.  I was surprised how far the fruit went.  It set really well, too.

When I took Mum back home each staff member we met asked how the jam making went and she was very happy to show off our completed product....even still a bit warm.  She'll enjoy taking a jar home with her every now and then.

I dare say I will have another go at making marmalade in the future.  However, the cupboard is empty of tomato relish, so that will be our next cooking episode...soon......then plum jam.......and tomato sauce.....

I just found a post where Mum and I made some plum jam a couple of years ago if you want to pop over for a look.

That pie looks so good! I've never had cherry pie, just tend to snack on cherries when they are in season. Robin doesn't like them so I get to enjoy them all!
The marmalade looks so nice, although ive never made that sort, usually grapefruit and orange. Not even sure what a kumquat is?

Oh my goodness, I can remember going up around the Mudgee area in NSW with my grandmother in my youth buying fruit and taking it back home to make jam - it was our job (my sister and I) to measure out the sugar. There was quince jelly, blackberry jam, apricot jam and goodness knows what other jams we made, but it was fun. Thank you for the memories.

YUM! Love marmalade, though I have never had kumquats flavour. I like them fresh, so I'm sure it's good.
My gran used to make lovely marmalade. These days I settle for a jar of roses.
Cherry pie too!

Hi Janice wow that pie looks amazing and has made me quite hungry,lol,well done on making the marmalade too,quite the bonus for Mick ,hope you have a lovely evening my friend xx

Your cherry pie looks wonderful!! Yum!! Lkvely to make the marmalade with your Mum, had a look at your linked post, looks loike your Mum enjoyed herself that day too. So good she can take a jar of marmalade back home with her. I have my Mums recipe books, two of them she has written recipes in and stuck in cuttings. Bring back happy memories for me.

Welcome to https://juulpods.org/,your number one electronic cigarette also known as e-cigarette among other names such as buy Juul Starter Kit, is a handheld battery-powered vaporizer that simulates smoking and provides some of the behavioral aspects of smoking, including the hand-to-mouth action of smoking, but without burning tobacco. buy juul pods online Store USA is stock with two of the most used e-cigars both national and international brands such as buy phix juul pods. Whether you are looking to buy juul online or buy PHIX online, or want to shop for cheap juul pods online, buy juul silicone case for sale, Juul Pods Online Store is here to provide you with just what you need. We strive to be the best online vape shop and offer only the best of the best.