A Sneak Peek – James May Sidecar

Remember when we were back on the Isle of Man.  Well, there is lots that I never got around to adding to my blog, so I’ll just occasionally add another little tit bit.

If any of you are familiar with the TV show “Top Gear” you will know of James May.  He has made a separate show on his own called James May’s Toy Story.  We saw a few episodes.  One was making a full scale Airfix model aeroplane, one was running model railway trains along the length of a disused railway line and another was building a bridge across a canal in Liverpool that would support a man made out of Meccano.

Well, he was at it again on the Isle of Man, making an episode for his Christmas special.  This time it was a motorcycle with sidecar made out of Meccano and he and his mate Oz Clarke were to do a lap of the TT Course – thirty seven and three quarter miles.

There was quite a bit of hype leading up to the start, which was at the end of a day’s racing.  We waited patiently at our spot beside the track for him to appear, but gave up, deciding instead to drive back along the course towards the start line and see if we came across him.

We finally found him, just around the corner from the start line.  To our surprise, we were able to get quite close and take some great photos.  In typical Isle of Man fashion, there was no keeping the public out of the way. 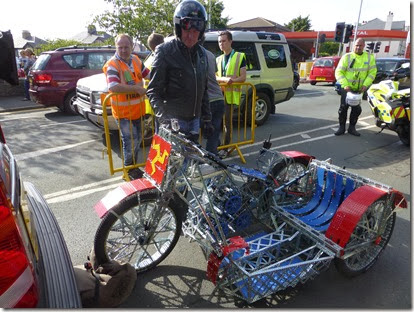 The bike is a true work of art.

It is powered by 90, yes, 90, little Meccano electric motors. 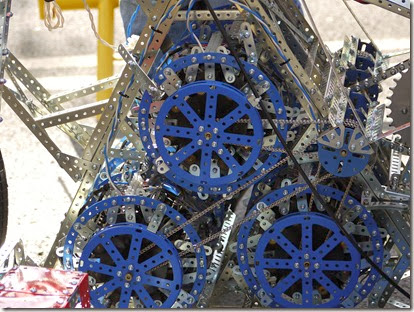 There was also a battery kit from a golf cart to help up the hills. 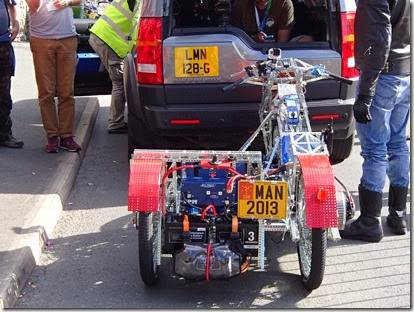 Look at the work in the wheels. 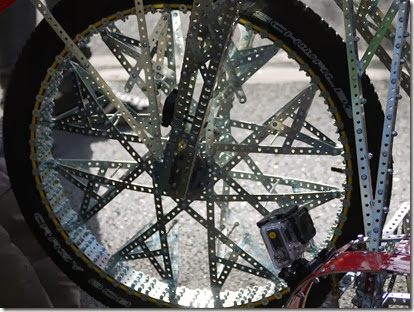 And the front view. 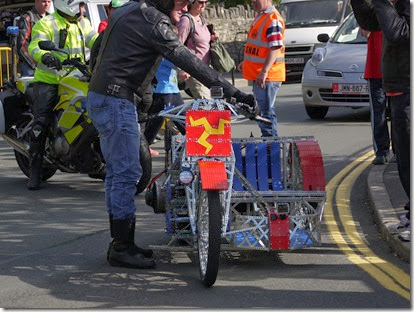 He was a very brave man hopping in that sidecar, relying only on the little pieces to support him. 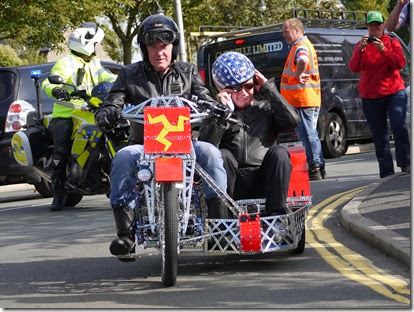 And off they go, down Bray Hill.  I hoped their brakes were good. 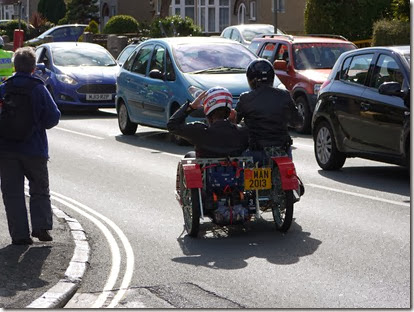 As we were heading back home we saw them still in Douglas, pulled up by their support van.  We hoped that there weren’t any major dramas.

Over the next couple of day people were ringing into the radio station giving updates on where they had seen the bike on its way around the course.  It took about 3 days to complete, but yes, they did make it all the way around and there was a big cheer for them at the finish line on the final day’s racing, just before the racing began.

I do hope they show the episode out here some time and that we don’t miss it.

how fun to go and see that... we do laugh at that show, and I used to love Maccano ...
Hugz