I’ve Finished Something & Out on Olga

We were planning to go away for the weekend motorcycling, but as they say “The best laid plans of mice and men…….”, so another time.  However, if we were away, we were going to miss out on participating in a charity poker run around here, so we still got to have a ride after all.

They were hoping for nearly 100 bikes to join in the ride, but to the organisers’ disappointment there were only about 15 bikes that turned up.  Not to worry, we still went and had a terrific afternoon out.

The day was lovely for motorcycling.  The sun finally came out after a rather feral week, although the breeze still had a bit of a nip to it.  Everything is looking so green and there is water laying everywhere.  We haven’t seen a season like this in about 10 years. 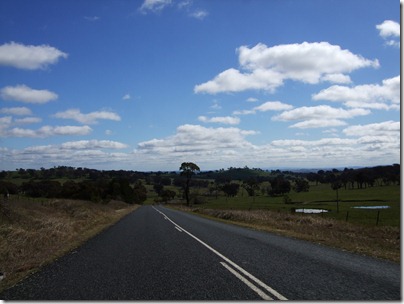 We stopped at country pubs along the way, one of which was at Lyndhurst.  Despite of all our rides I have never been into the village of Lyndhurst before, even though it is less than an hour from home.  We usually just stay on the highway which bypasses it.  The pub was a lovely old place. 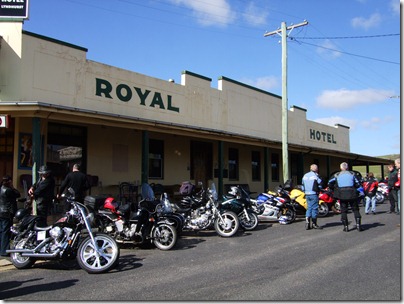 After the ride most of us went back to the local pub for dinner which finished off a great day. By the way, Olga went really well, so hopefully most of the bugs are now sorted.

On the sewing front, I was starting to despair of finishing anything this month, but I have finally had a chance (and been in the mood) to make a few things.

Jenny of Elefanz had an August Challenge to make something out of an old piece of clothing.  She has been really creative with an orange shirt.  A couple of months ago her challenge was to make something from an old pair of jeans, but I didn’t get around to it.  I was really taken with one project that used a pocket with a flap. As I had recently purchased a pattern for a backpack, I thought that would be a perfect feature to have on the front of a denim backpack.

I went shopping at the Sallys and was rapt when I found this pair of jeans.  They are a relatively lightweight denim, so not too difficult to sew, nice wide legs with a flap cargo pocket, so would already have the seam detail that I wanted.  Perfect. 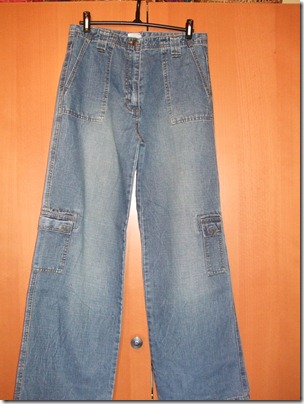 So, not to leave things too late, I sewed this afternoon and am quite pleased with the end product.  It has a faded roses fabric trim and lining. 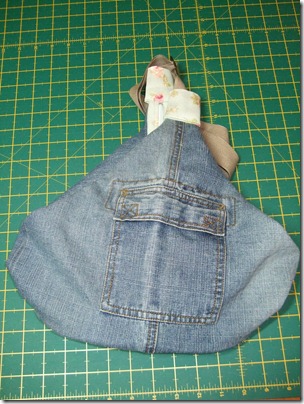 Unfortunately it is difficult to photograph, but I think you will get the idea.  It has a shaped top with a zip from front to back. 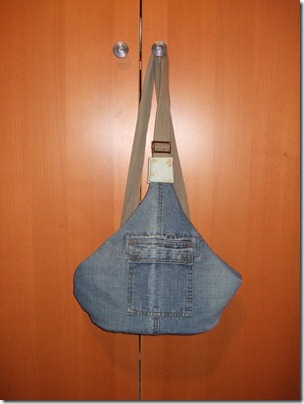 I also wanted to have a go at Judith’s challenge for the month.  This time we were challenged to make a gift featuring hearts.  It could be one or many.  I thought a coat hanger would fit the bill. 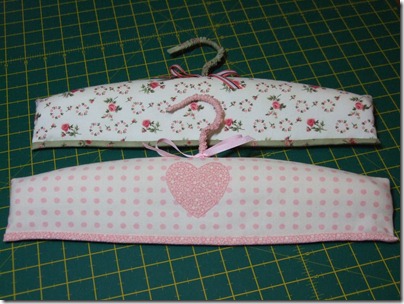 I made another one while I was at it.  The pattern is by Joy Coey and she shared it on the Gumtree Designers’ blog earlier in the year.  You can find it here.  I love this pattern, it is so quick and easy, but gives a lovely finished product.

So there you go, three finishes for Early Christmas Crafting and OPAM Challenge, Judith’s challenge met, and Jenny’s challenge met. If it wasn’t for these incentives I don’t think anything would have been finished this month.  Let’s see how I go in September.

Oh, and I made a batch of Jodie’s scrummy lemonade scones for morning tea today.  You should try them.  They will definitely be going in my recipe book to make again.

Sounds like you all had a fun ride.
Great bag you made out of the jeans.
You have done well making the coat hangers with hearts for the xmas Challenge too.

What a fantastic backpack, Janice!! And of course I love the shabby roses fabric for the trim. :-)
Cute coathanger dresses too - Joy made such a sweet pattern!

Hi Janice it,s cottonreel , re the exercises .Right cheek responding in a funny sort of way--cottonreel

I shall be back to spend the afternoon with you , so much to see . I,m looking for your followers list--cottonreel

Sorry you missed the ride this weekend but the Poker Run sounded good. Nice to find great places close to home. Love the back pack too. Might see it on a bike ride one day?