Tuesday Treasures and I Can Remember How to Sew

Gosh, where did the last week go.  I can’t believe it is Tuesday Treasures time again.

I had a wander around this morning to see what I would share and came up with this little duo.  They live on the bookcase in the living room. 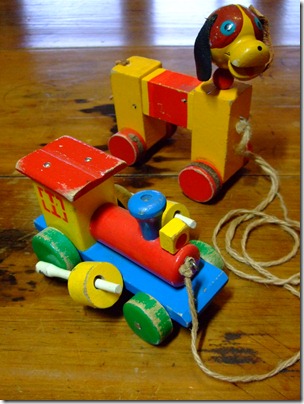 I’ve had these for quite a while.  I don’t know the origin of my little puppy, but I can remember the arrival of my train.  We were down at Grandma’s and Mum and Grandma went into town leaving us kids behind.  They returned with a train for each of us.  As you can see, both these little pull along toys saw much use and love.  The train has a little squeaker, which still works.  The puppy’s head nods, as it is on a spring.  He had lost an ear and his tail, but Dad replaced them.  It doesn’t matter that they don’t match his surviving black ear.

Pop over to Melody’s to see what other treasures are on show this week.

Also, can you believe it I have made something that I can show.  Sewing seems to have been on the back burner lately.

Each year I like to make a Christmas decoration for each of my little nieces.  This year I chose a pattern from Handmade by Lisa Cox.  I thought these handbags were just too cute. Once I had made them from the pattern in the magazine I felt they were a bit too small, so I added 1/4” seam allowance to the pattern and made a larger version which I like better. Therefore, the girls will get two little handbags each.  Yet another quick and effective idea.

Hi Janice,
I love the fact that these little toys look so well loved. The little Christmas handbags are very cute.

I love your toys for Tuesday's Treasure. You were lucky your Dad was able to do some surgery on them.
Good on you for getting some sewing done for lyour nieces.
Happy days.
Bev.xoxo

Love the little pull along toys. It's good to see them well loved.
What a great post about your day on the harbour. Looks like a hoot!

Your little pull toys are just adorable and so special that you have them on display .The purses are sweet your nieces will love them , very cute idea .
hugs SHeila