I’m a bit late with my wishes, but it seems to have taken me this long to get in the mood for writing a blog post.  A case of I don’t know where to start.  Like other blogs that I have read, so many posts written my head, in the middle of the night, or while driving, but just not transferring those thoughts into type.

Before things get too stale, I will do a review of 2014 over a few posts.  Towards the end of the year we were just so busy, that I didn’t get to share what we were up to.  There were lots of fun things, so I will do a bit of a back track.

OK.  Let’s start at the very beginning, a very good place to start………or so they sing…… 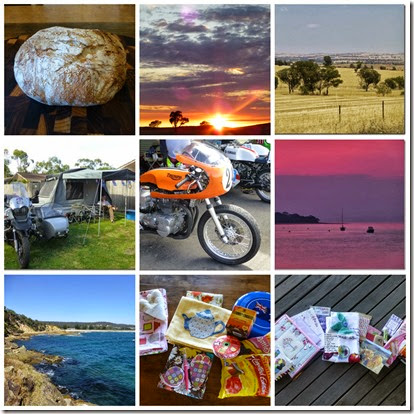 To put things simply, I was stressed….to the max!  I don’t think that I mentioned it at the time.  We had started to prepare our home to put on the market and there was so much to do.  It was all a bit overwhelming for me and I couldn’t see the end of the tunnel.  But, as you know, we got through it.

In the meantime, I made my first ever bread, we went over to Goulburn to the  Motorcycle Swap Meet, took a week long road trip to Phillip Island to see some classic bike races and came home via the south coast.  I also took part in Jewell’s Australia Day Swap (just what was needed to add to the already high stress level, but it was fun). 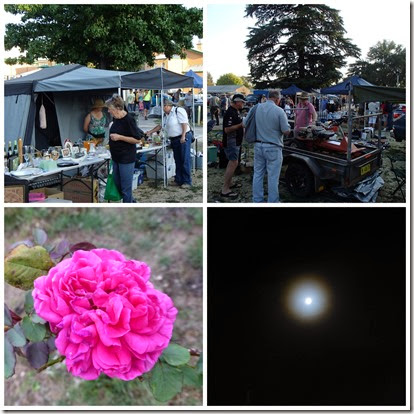 February was a bit quieter, socially.  As usual, we were very involved in the Bathurst Swap Meet, as organisers and having a stall.  Great for starting to de-clutter before selling.  The roses put on a show and we saw a stunning halo around the moon.

In the background, we were still beavering away with our de-cluttering, taking things into town to store at the house we are in now, as well as getting it renovated.  I think it was about then that we had some painting done on the exterior at home as well. 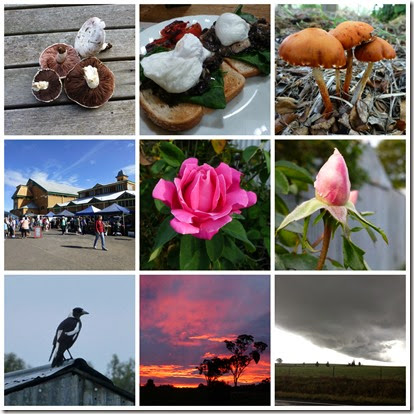 The weather cooled down a bit, we had lots of mushrooms (yum) as well as little toadstools, the garden got its autumnal flourish, I went to the Farmers’ Market and we had some stunning skies. 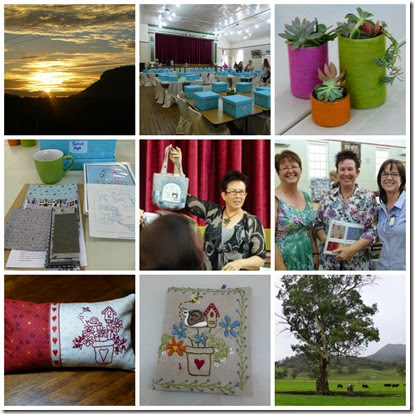 March is also the time to travel to Nundle.  It is so much fun to catch up with everyone.  I love the drive up and back.  Lynette Anderson was a great tutor and the project was lovely.  The swap this year was one of Lynette’s stitchery patterns.  So many beautiful variations.  I made mine into a pincushion.  I’m looking forward to the next get together.

March was also the month I revealed our big plans to sell, move to town and build a house on the block of land we bought in late 2013.  We were still beavering away getting ready to sell.  It was taking longer than we hoped, but more important to have the presentation right than rush things. 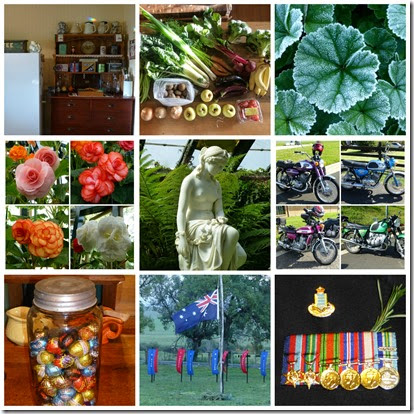 The weather was cooling down, with our first frost, I visited the Begonia House at Machatti Park in town and took you for a stroll.  Lucky me won a big vege hamper and  I decluttered the kitchen.  Easter arrived, complete with lots of little eggs, which seemed to disappear rather rapidly and we attended the Vintage Bike Rally on Good Friday.  Anzac Day saw me wear Dad’s miniature medals for the first time when we attended the bush service in a paddock at O’Connell.

We finally had our place ready to put on the market, so started discussions with Real Estate Agents. 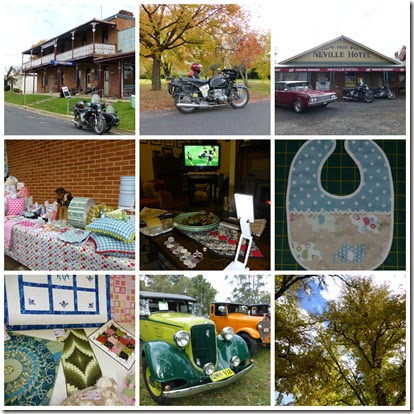 Our house went on the market at the beginning of May.  The start of a rather long process.  I tell you what, there is nothing like it to keep you on top of the housework.

In other doings, we went on a Historic Car Club outing to Neville on Olga.    Hot chocolate at the pub, too cold for beer.  It was nice to get out and about.  I did a bit of stitching, although not much.  We went to the show, I visited the park and kicked autumn leaves and there were some great Artisan markets in town.  Finally, the Historic Car Club hosted its annual car rally. 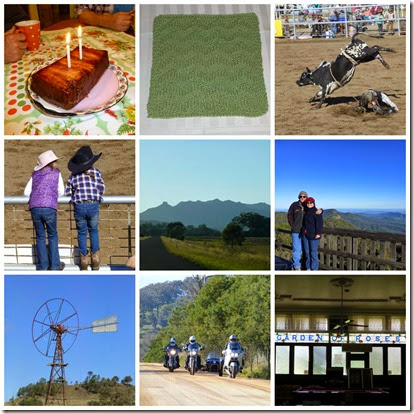 Now that the worst of the preparation to sell the house was done we allowed ourselves time to breathe.

Chooky held a 2nd Birthday Party for “The Chookshed”.  We couldn’t be there so we had cake instead.  Any excuse for cake.  I knitted a wash cloth.  We had nothing planned for the long weekend, so we hopped in the ute and drove up to see Chooky and family, attending the rodeo while there.  On the way home we visited Mt Kaputar, which was stunning.  Later in the month we went on our usual Winter Solstice motorcycle ride, this time to Canowindra.

In the background, lots of housework and scribbles at the kitchen table to come up with a house plan. 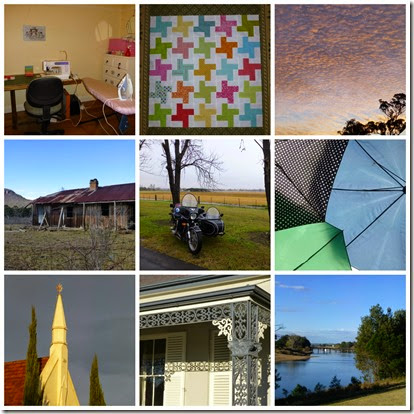 July is our typical hibernation month.  Too cold for anything much to be happening.

I shared my new little sewing area and made the top of a baby quilt.  We had a stunning mackerel sky and we attended the Classic Bike Rally at Windsor.  We took a lazy Friday to get down there, it rained on the rally, but cleared up in the afternoon, so were able to have a lovely walk exploring the town and riverside park.  Amazing how much warmer the climate is, only two hours away from home.

Meanwhile, plenty of lookers at our house, but no offers.  Keep cleaning, keep cleaning. 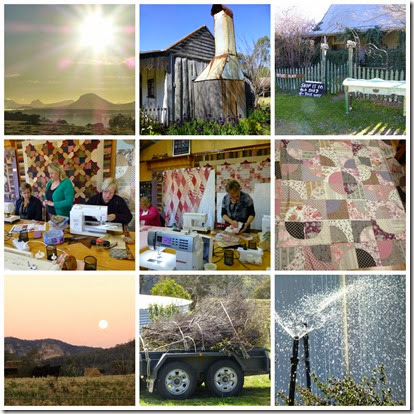 We start to get a few warmer days, so it was time to get out in the garden and give it a good tidy up after Winter.  We checked the watering system, and the sun in the sprinklers was so pretty.

The highlight of the month was another visit to Nundle.  This time for a weekend retreat at Kerry’s.  Once again, a pretty drive up, a visit to Ratter’s Flat and lots of creativity.  I opted to make a huge Drunkard’s Path Quilt.  The top is 96 inches square.  I love the soft colours.  No, it isn’t finished yet.  I have to piece a back and get it quilted.  Must do that soon. On the way home I was able to enjoy the super moon while driving through the Bylong Valley.  Beautiful.

Still no interest in our home, so we changed real estate agents and started planning to go to auction. 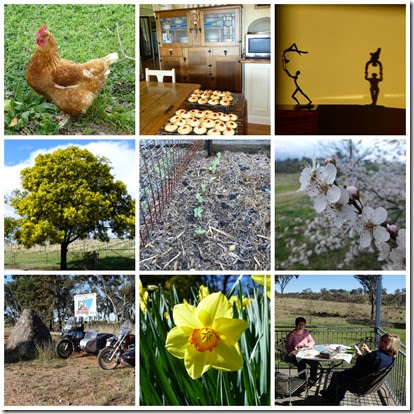 On the home front, we got some more chooks, I did some baking, we played with shadows and the garden woke up, with blossoms and snow peas.

Getting close to starting to advertise the auction of our home. 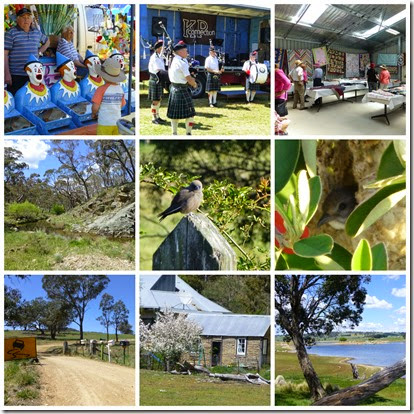 Now, this isn’t all of October.  What I did get to blog about was our visit to the Trunkey Creek Show and our detour on the way home, the visit of so many birds and our robins nest, and our explore on our way to Oberon Dam.

In the background, our auction was advertised, with lots of people coming for a look at our place.  Keep cleaning, keep cleaning.

However, there was more in October and heaps in November that never made it to the blog.

I will do individual posts for them as I do want to have a record of all that we got up to.

What a great year, lots of good times.

What a great summary of 2014!! I was able to catch up on some bits I missed, I think I found you half way through the year. Keep up the good times in 2015.

Hi Janice,thankyou for sharing your year with us,i love how you have done it,you had such a busy year ,enjoy your day my friend.xx

LOVE how you have recorded all this in one post...so entertaining.. wish I knew how to combine photos like you have..must find out.