To recap, just as we were about to leave the Newbridge Swap Meet last weekend, a car came in to set up a stall and I noticed a chest of drawers on the roof rack.

I’ve been looking for a chest of drawers to hold fat quarters, but with most the drawers are too shallow. When they unpacked, this one looked fairly good. It is just a cheapy pine job, but it was nice and clean and not knocked about. Best of all it was for sale at the princely sum of $10.00. 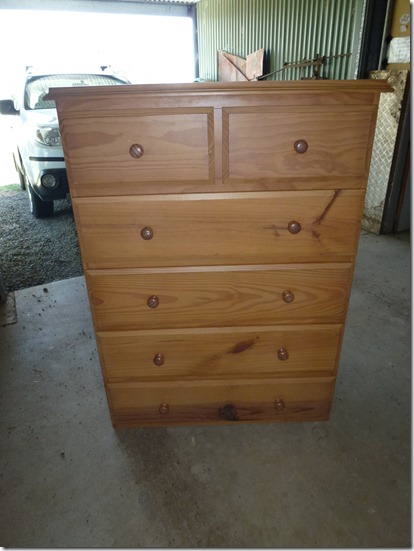 I was quite excited. Mick not so much. He wanted to leave it there, but I won out. It fit in the back of the car and on the way home I requested we go past the hardware shop, which was a bit out of the way, to have the reply, “Are you going to do anything with it today?” Of course I answered that I was. Mick knows me too well. I have a habit of getting things to do and either not finishing them, or more often than not, not even starting.

We duly stopped at the hardware shop, so I had to make a quick decision as to what I wanted to do with the chest of drawers. I knew I wanted to paint them, but really wanted to have a bit of a think about it. Oh well, the simplest thing would be to paint them in Dulux Clotted Cream, the same colour as all of our architraves. I would change the handles and maybe do a bit of stencilling.

I’ve never painted furniture before. Mick and I have stripped paint off many pieces in the past. I don’t think I could paint a good piece of timber furniture, so this chest ticked all the boxes.

As the weather was quite hot, I was able to get the undercoat and two top coats done on the Sunday afternoon. That’s where it was at until today.

During the week I had found some nice handles and after a hunt around, found a suitable stencil in Spotlight. Not quite what I was after, but it would do. What colour to do the stencil in was the next question. In the end I found a folk art paint called “Peynes Grey”, which is like a charcoal.

This afternoon I bravely did the stencilling. I haven’t done any since the mid 90s. It isn’t perfect, but it will do. Mick had to give me a hand with the handles, as the screws weren’t much good.

The best thing is that it is finished.

I’m quite pleased with the result. Well no, that’s an understatement, I’m actually thrilled to pieces with how it turned out. I just can’t wait to use it. 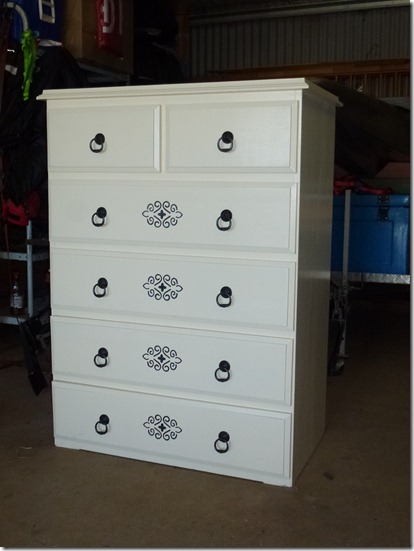 Now the next phase of the project has to commence. I have to make room for it in the house. That will take much more work. Watch this space.

The Month So Far

Just when you think things will calm down after the silly season, they actually get busier for us.

To start with, on the first weekend of February our Historic Car Club hosted the Bathurst Swap Meet. We had the best weekend.  After all the hot weather and then storms, the weather on the day was about perfect – sunny and 25 degrees C.  As a result, it was an incredibly successful day with everyone going away happy.  We had a stall as well as being involved in the organising, so were a tad busy.  As a consequence I forgot to take photos, except for our lovely old Cyclops Clipper pedal car that we parted with.  We’ve had it for several years.  It used to live on top of a bookcase, but we replaced that with a different display cupboard and it no longer fit.  It was sad to see it go. 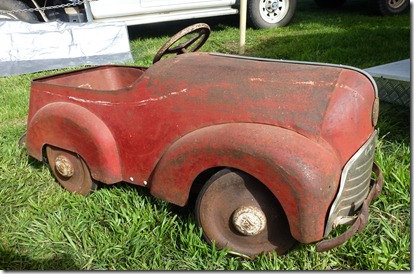 Last weekend saw us at another Swap Meet.  This time at the little village of Newbridge.  We had planned to have a stall there too, but we did so well at Bathurst that we didn’t have a lot to sell, so just went for a visit.  Once again the weather was good, so there was a good turn out of both sellers and lookers. 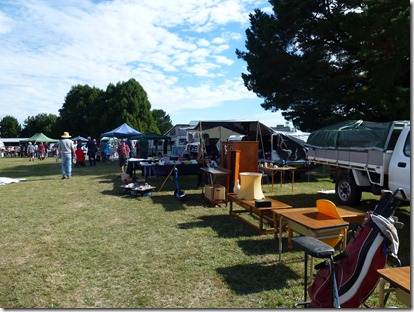 Don’t you love this old sewing machine.  It would make quite a statement. 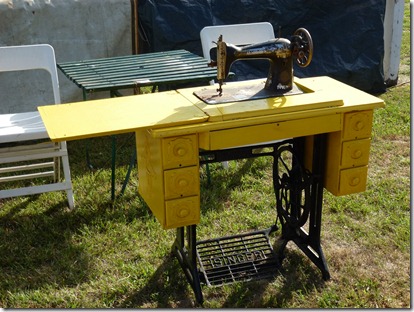 This peg bag also caught my eye.  I was strong and left it there. 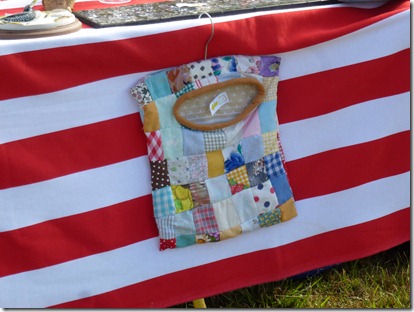 We bought a couple of little things, but just as we were about to leave a car came in to set up a stall and I noticed a chest of drawers on the roof rack.  I’ll tell you more about that soon.

This weekend was also busy.  It was the Orange Country Classic Bike Rally.  A group of us from Bathurst went up after work on Friday and camped for two nights.  We had a nice little area in front of the trees. 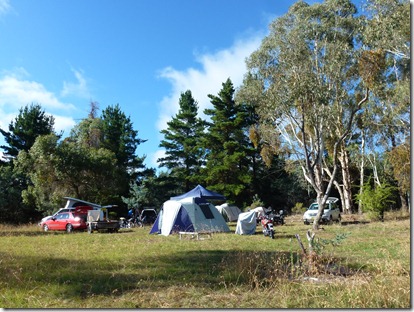 At the first marshalling site I got off and decided to travel in the back up vehicle.  However, the marshal offered to take me on the back of his bike, so I ended up travelling in style on the back of this rather tasty Harley.  Very plush, but I’m still very happy with the bikes that we have. 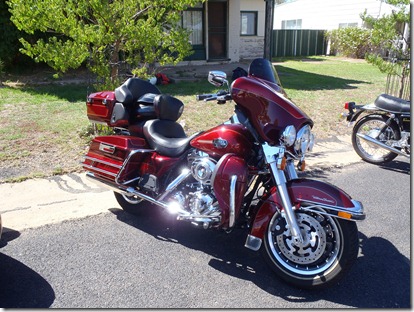 It was also good, as we marshalled at a couple of corners and I was able to see all the bikes go past.

Our mate Martin went well on his newly finished Honda CB350.  He was thrilled when he won a trophy. 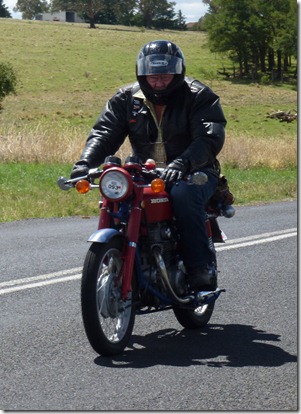 Mick and Cath had fun on Olga. 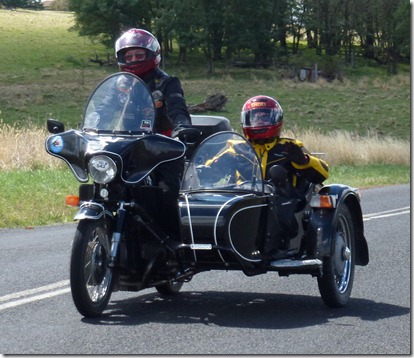 It was a fabulous weekend.  We all had a great time.

Cath and I had travelled up in my car, so we had some time shopping in Orange today.  Even though Orange is just up the road, it is years since I’ve had a look around the shops there.  A great way to finish off the weekend.

Next, onto the stitching front.  I have not made one single stitch this month!!! I think I will have to do some embroidery in my lunch breaks this week or I will be making a very quick exit from the Stitch-A-Long.