Our garden has been going gang busters this year.  A combination of no late frosts, regular rain, watering and a bit of care by us and the magic ingredient of worm wee have made a huge difference.

One of the success stories has been our rhubarb.  The leaves are ginormous - up to 18 inches across. 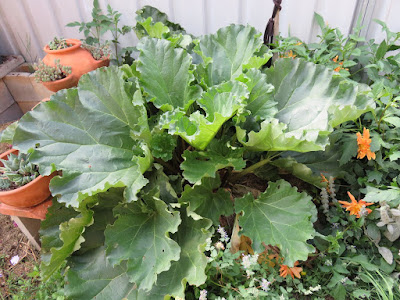 There is a bit of history to this rhubarb plant.

When I was a kid we grew up in a house that was on the river flats, which meant it occasionally was flooded.  That was the down side.  The upside was that the soil was wonderful for Dad's great big vege garden that kept us fed during the warmer months.  Down at the back corner of the vege garden was the rhubarb plant.

In my mid teens, in 1978 we moved just up the road, on the top of a hill, where Mum still lives.  Dad put in another great big vege garden and took part of the rhubarb plant with him.

Moving forward to the mid 80s, Mick and I bought our first house and put in our little vege garden.  Dad divided off some of his rhubarb plant for us.

In the late 90s we moved out of town and planted our big vege garden.  Of course we took some of our rhubarb plant with us.

In the meantime, Dad was getting older and decided that his vege garden was too big to look after.  Rather than downsize it, he removed the lot and planted the area with easy care ornamental plants.  To my amazement he removed the rhubarb plant, and Dad loved rhubarb.

Over the years our rhubarb was looking rather sad.  Lack of water, feeding and care does that to a plant that is a heavy feeder and needs to be divided occasionally.

However, when we moved back into town just over a year ago, we divided off a bit and brought it with us, determined to give it a bit more TLC.

The proliferation of earwigs and slaters that were in the area in early summer nearly skeletenised the leaves, but they have come back beautifully now. 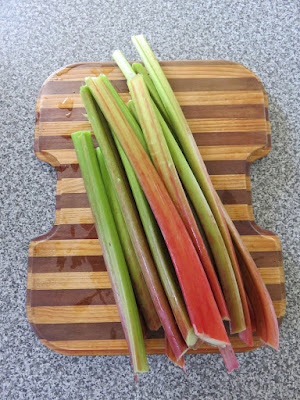 The other day I bought a couple of punnets of strawberries that looked fine, but on closer inspection were a bit mushy from the wet weather.  Now we have a few containers of rhubarb and strawberry in the freezer ready for crumbles when the weather cools down.  Yummo!

By the way, we will of course divide off some of the rhubarb plant to take with us to our new house.

What a lovely story Janice! Wherevarevyoz head off to this time...still locally?

Hi Janice what a lovely story,mum does her rhubarb with strawberries too,yummy,glad you are taking some when you move xx

Like you, our rhubarb plants have travelled from our previous home in Upper Hutt here to Levin. With the addition of an occasional lot of pony poo they a thriving. IN fact I must cut some more, chop it up, place in plastic bags and put it in the freezer.

Must admit that I have never heard (or tried) rhubarb and strawberries. Is that an Aussie thing perhaps?

Ew! Nasty rhubarb! LOL I remember Dads rhubarb, it was huge, he fed it with the stuff he cleaned up from the floor of the chicken coop!
Sounds like you have revived your own rhubarb and it is thriving again. Enjoy.

Great rhubarb story. Apple and rhubarb crumble is my favourite.

What a great story about your rhubarb plant. I love the look of rhubarb plants with their big leaves and red stalks. Stewed with strawberries will be such a wonderful treat when the weather cools, a taste of sunshine on a cold day.