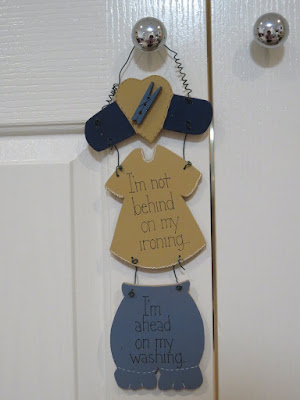 This little sign pretty much sums me up!  One of my best friends gave it to me some years ago.  She must be a good friend to know that I would have a good chuckle at it and not be offended.

Where is this leading?

Well, today I caught up on  my ironing.......right down to those bits and pieces that have been sitting in the bottom of the basket for goodness knows how long.

One of those items of clothing was a blue chambray shirt of Mick's.  It had been a work shirt many years ago, became a home shirt and now the collar has completely gone and he hasn't even worn it as a hom shirt for ages......maybe because it was at the bottom of the ironing basket and if it gets ironed it means that all his other more favourite shirts are ironed too and it won't get worn until the ironing has mounted up again......if you get my drift.

The majority of the fabric is fine, just the collar has worn out.

Now what to do with it, rather than it just join the stash? 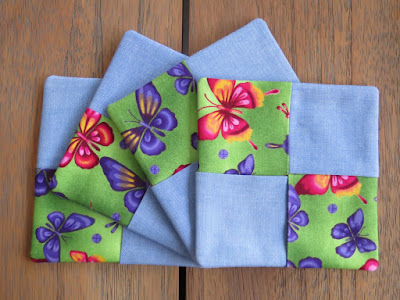 We treated ourselves to a rather tasty outdoor setting for our new home, and we are being very careful not to mark the top.  Our favourite coffee mugs are orange, yellow, lime and purple.  I thought I would make one coaster of each colour, but I didn't have a decent purple. Then I found this rather fugly fabric in the right colours, something I don't think I would ever use, so very quickly whipped up some coasters.  They'll do the trick, even though they aren't anything special.

Some years ago I had an op shop linen skirt and gave myself a challenge to use as much of it as I could.  I may try to do that again with this old shirt. 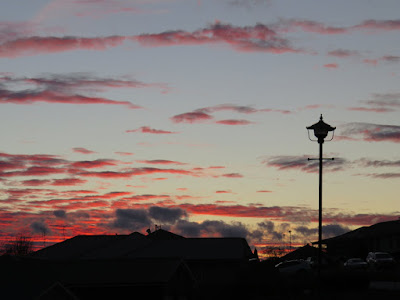 We have had glorious weather this weekend, which has been a nice change from the bleak weather of the last few weeks.  The lawn even dried out enough for Mick to mow it. We made the most of it as it is forecast to be rather wintery again over the next week.

Labels: Odds and Sods, OPAM, Our Home, patchwork, sewing, Sewing Room, Use What I Have, Using My Stash, weather

That's really cool and the fabric doesn't look too ugly at all. I need some of those for my glass table. Must do some.

Lol the sign is funny.
I love the coasters what a great idea to recycle Micks old shirt,we have been freezing here today and it's blowing a gale,enjoy your evening my friend xx

Just the best sign your friend gave you....LOL.
The coasters look fab made with both the chambray shirt and pretty fabrics .....
Our Block has been too wet too mow as well.
Still raining tonight....

Too wet for the mower here, not thar we're getting much rain, but dew and frost are keeping the gardens moist. Love your wee coasters. I remember that skirt, it seemed to go into a huge amount of projects.

Nice set of coasters - clever of you to use up an old shirt.

And as for ironing - I have to admit that I rather enjoy ironing, and smugly admit that I never get behind. And I have a bit of a reputation with doing the washing too. Happiness is clean laundry!

oh fun - I get ahead of myself with the washing too! and then it's boring catching up but I have found audio books are helping a bit with that!