After the success of last year's Winter Festival as part of the Bathurst 200 Celebrations, it has been decided to make it an annual event running for the two weeks of the school holidays.  The theme this year is "Fire and Ice". We do get a definite winter, as has been experienced over the last couple of weeks, so it is a great idea to embrace it.

This year the ice skating rink is double the size and much more professional looking, there are two night time street parties and we have a ferris wheel in addition to the giant slides.

On Saturday the party was entitled "Ignite the Night" and the illuminations of the court house and other buildings were turned on.  We will go down one evening during the week to have a better look at the buildings all lit up.  Even the trees had fairy lights in them. 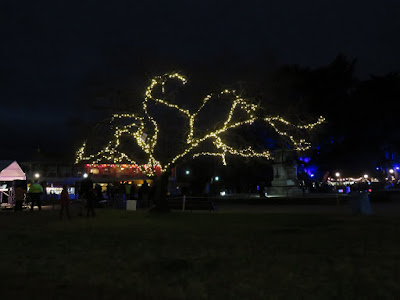 Last year we ventured down town to the party while it was still daylight, but this year we didn't get there until after dark.  There was once again a huge crowd, of all ages.  Lots of families with young kids, which was great to see.  The weather was ideal - cold, but not icy and for a welcome change it was not raining. 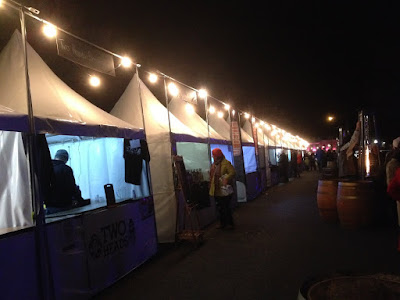 We enjoyed wandering around soaking up the atmosphere, listening to the music and enjoying the street performers. There was a great range of local food, wine and beers being showcased. The above photo was taken when it was nearly all over. You couldn't move here earlier in the evening.  Our old next door neighbours have a vineyard and winery and were serving mulled white wine.  It really hit the spot.  I'm not a big wine drinker, but it was rather moreish. 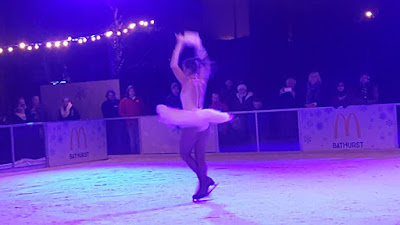 We were treated to a display by some professional ice skaters.  They make it look so easy and graceful. 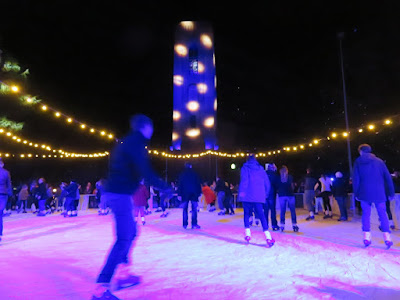 Then we enjoyed watching everyone else skating.  Every now and then a flurry of fake snow would drift over the skating rink and the carillon would change colour in the background, creating a great atmosphere.  Everyone looked to be having so much fun, unless they were falling over.

One thing I really wanted to do was go on the giant ferris wheel.  It was my favourite ride when I was a kid...Obviously, I'm no dare devil. 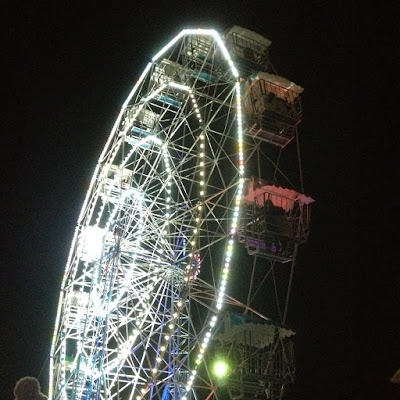 This one dates back to the early 60s. It looked so much like the one that we used to ride on at the Bathurst Show.  After asking the operators, yes, it is the same one we used to go on.  However, the cars are now totally enclosed by cages.  A sign of the times I suppose. 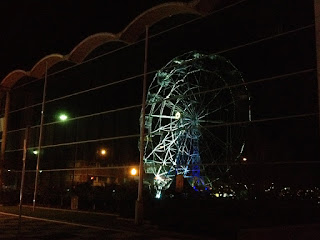 I loved the way it reflected in the windows of the council chambers. 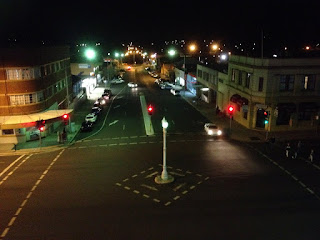 The view of the streets from the top was great. It's funny, I don't like heights at all, but love the ferris wheel.  I just don't look down, just look out, if that makes sense. It was a tad chilly at the top. 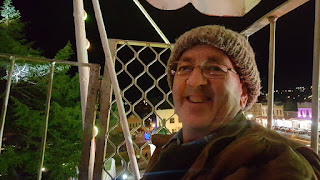 Mick was enjoying himself as well. Just a big kid at heart.

Next Saturday night the the theme is "Brew and Bite", so we are expecting some more great food and drinks.  We will also be entertained by the return of the silent disco and an ice hockey game.  The first to be played in Bathurst. I had a look at the weather forecast.  It is supposed to be possible showers every day except Saturday.  I do hope that is the case, as it should be another fun evening out and about.

Labels: Food, Odds and Sods, Out and About, weather

Hi Janice and Mick looks like you both had a ball,lots to see and do ,lovely pics My friend and sounds like more fun next weekend ...

Looks like fun. Very wintry here too with some good frosts in the mornings. Love the warm sunny days that follow those.

What a fun night, topped off with a ride on the Ferris Wheel! You didn't mention partaking in the ice skating though.

Yay for it being made into an annual event, that means maybe I'll get to visit one day. Until then it's wonderful that you shared your photos for us to see, it all looks like a winter wonder-fun-land!