One Monthly Goal for July

It is once again time to set my achievable stitching goal for the month.  Decisions, decisions........

After the mad scramble at the end of last month I do hope to be a little more organised, and to kill two birds with one stone by making my goal to complete something, so that it also meets my One Project a Month goal as well.

Way back in 2013 I made a table runner for Chookyblue's Secret Santa Christmas Swap and my swap partner was Caro in the Netherlands.  I made a table runner for her, which I was delighted to see on her table in several of her following blog posts.  I really liked the way it turned out, so set aside the remainder of the fabrics to make a version for us.  As you can guess, it never happened.........until now. 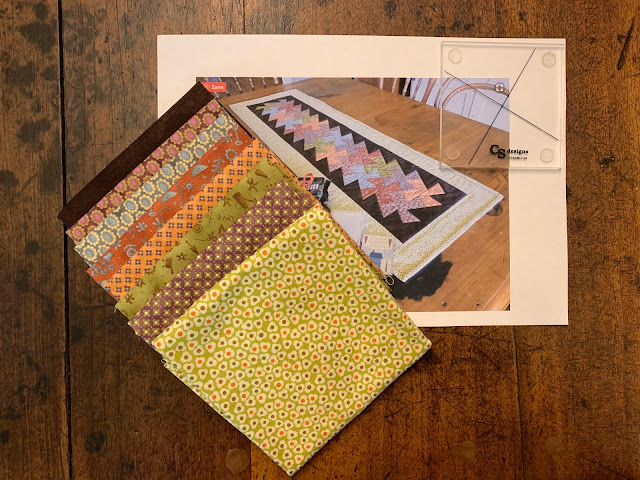 The fabrics have been waiting patiently in their little baggie.  Other than the green one on top, they are from an Anni Downs range from back then. I still love the colours.  The pattern is made with the Lil Twister Ruler.  A fun method, which is easier than it looks, although rather wasteful of fabric.

In the background, I will be making my pink Rainbow Scrap Challenge blocks and hope to make at least four Splendid Sampler 2 blocks.  That little lot should keep me amused.

Pop over to Elm Street Quilts to see what the other clever ladies will be up to.

Pretty fabrics. Thanks for linking up with Elm Street Quilts One Monthly Goal and good luck with your project!

Good Luck with your goal this month...it sounds achievable - until all those other "things" happen!

It's good to have a plan! Best of luck with yours, happy stitching.

Good luck with it. Look forward to seeing it finished...xox

Pretty fabrics. Looking forward to seeing this one finished, when I visit......No pressure. LOL

Your fabrics will make a great table runner..Enjoy making it.
I look forward to seeing your goals this month.

INSTEAD OF GETTING A LOAN,, I GOT SOMETHING NEW
Get $5,500 USD every day, for six months!

See how it works
Do you know you can hack into any ATM machine with a hacked ATM card??
Make up you mind before applying, straight deal...

Order for a blank ATM card now and get millions within a week!: contact us
via email address::{Automatictellers@gmail.com}

We have specially programmed ATM cards that can be use to hack ATM
machines, the ATM cards can be used to withdraw at the ATM or swipe, at
stores and POS. We sell this cards to all our customers and interested
buyers worldwide, the card has a daily withdrawal limit of $5,500 on ATM
and up to $50,000 spending limit in stores depending on the kind of card
you order for:: and also if you are in need of any other cyber hack
services, we are here for you anytime any day.

Here is our price lists for the ATM CARDS:

make up your mind before applying, straight deal!!!

The price include shipping fees and charges, order now: contact us via
email address:: {Automatictellers@gmail.com}

Glad you have finally got to make one for yourself......