Before and After - The Garden

While I didn't get much stitching done in June, lots of other things happened here at home.

I've shared earlier here and here that we started a new garden out the front. Before we went on our holiday we planted 50 mixed daffodils, some foxgloves, pansies, box shrubs and lavenders.  However, we had to wait until we returned home to buy the centrepiece. 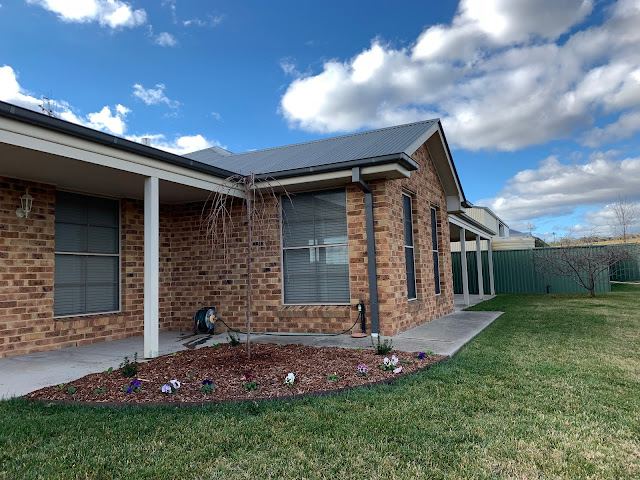 We now have a nicely shaped weeping cherry.  The garden bed should put on a nice show in the spring. 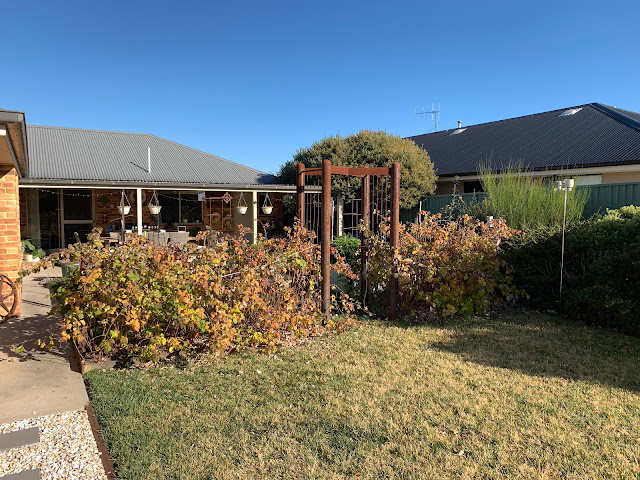 Now that the raspberries had finished fruiting it was time to tidy them up.  The rule of thumb is that you remove canes that have fruited and next year's fruit grow on second year growth.  However, I read on a blog that autumn fruiting varieties can be cut back to the ground.  Our plants were given to us by a friend, so we had no idea what variety they were, but in their first year they seemed to fruit more in autumn that early summer, so last winter we cut them right back.  It worked beautifully, and is so much tidier during winter.

Also, before we went away, Mick cleared out our raised vege beds of the spent plants and dug in some worm castings from our worm farm. 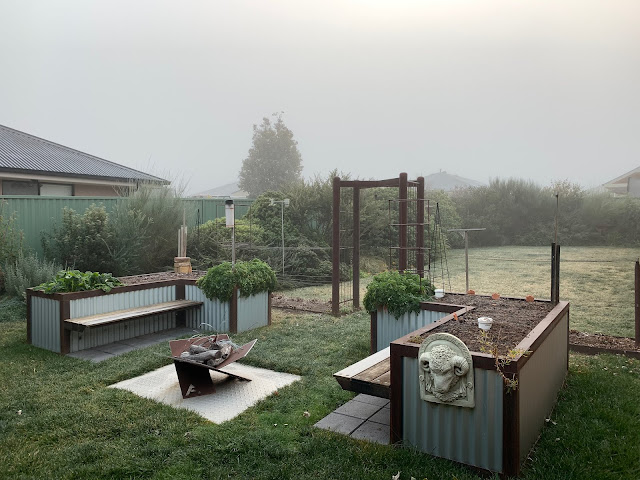 Here it all is, nice and tidy, on a frosty morning.  All that was left is the parsley, silver beet we planted in early autumn and tarragon.  The white things you can see in the centre of the beds are worm tubes.  They are just sewer pipe with lots of holes drilled in the sides set deep in the beds.  Add a handful of worm farm worms and feed them kitchen scraps.  They act as a feeding station for the worms, where the eat the scraps and then go through the beds doing whatever worms do to improve the soil.  They work surprisingly well.  We top them up with scraps every month or so. 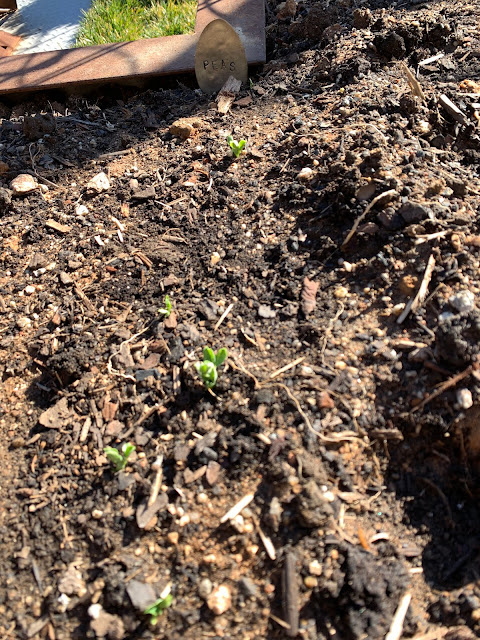 When we returned home we planted some peas and broad beans, which are just starting to poke their heads through the soil.

Next on the agenda was to remove some wattle trees at the end of our back verandah. 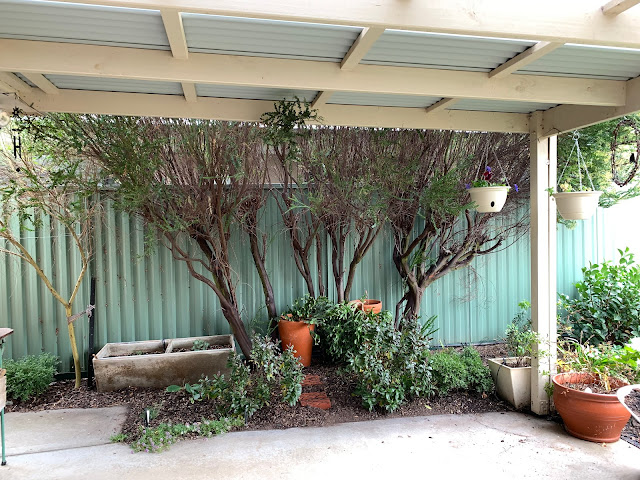 The wattles provided good shade in the summer but always looked messy. 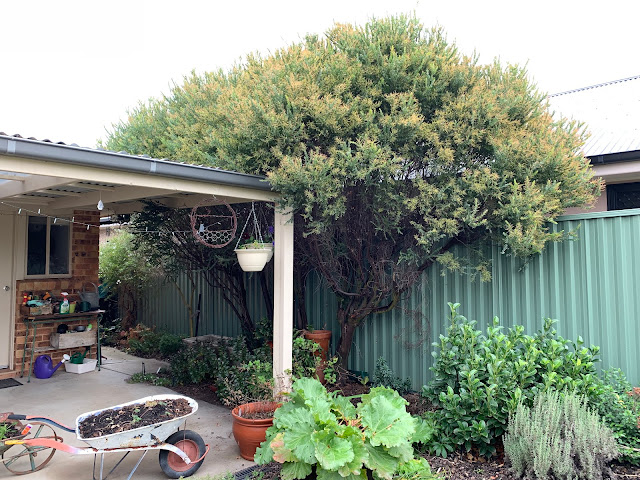 They were also rather large for their position. 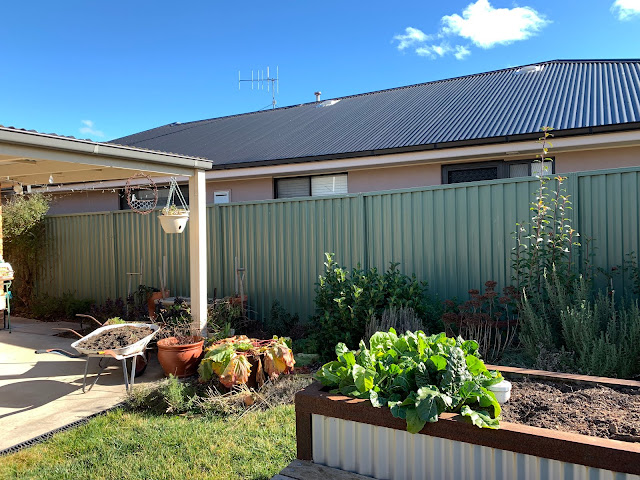 After a busy day, and a very full trailer, things look rather different.  We were amazed at how much extra light came into the yard.  Not something only realised by us.  Our next door neighbour also gets lots more light into her kitchen.

The plan is to build a frame off the end of the verandah and plant a wisteria, which should still provide summer shade, but let in winter light, as well as have beautiful flowers.  Mick is busy scheming on how he will build the frame.  I think that will be his next project to have ready for when we can buy a wisteria plant in spring.

Some more tidying up will take place closer to spring, but we are happy with progress so far.

Labels: Our Backyard, Our Home, weather

Hi Janice, I have been commenting using my phone and have just discovered that for some reason it doesn't work,I am still travelling for a bit yet,so will comment when I have Internet.
Wow your garden has really come along I love how you and Mick have layer it out,you both have a beautiful garden and home my friend xx

Both of you have been busy in the garden... looks good and I'm looking forward to seeing your Spring blooms...

Your garden is looking great, it's good that your hubby is so handy around the place.

Wow, what a difference removing those trees has made.
our garden is looking really good.

You have done heaps in the garden, amazing the difference taking out the tree has made. I haven't seen worm farms like your before, might convert our box one, one day😊😊.

It would have been nice to come home from your trip to bulbs sprouting and a fresh garden growing! I've never heard of a worm farm like that and it sounds like a great idea!