Way back in August 2014 I attended a retreat at Nundle and made a quilt top in a day and a half.  It was BIG! 96 inches square!

Straight away I made a pieced backing and arranged for my friend to long arm quilt it.  After that I bundled it up and put it in the cupboard.  It's not that I don't like it.  It is just that the thought of binding something that BIG was a tad daunting.

Finally, when I visited Chookyblue in June this year, I bit the bullet, trimmed the sides, made the binding and machined it to the quilt........and then bundled it up into the cupboard again......

In October I dragged it out again and started hand stitching down the binding.  However, I soon ran out of puff and bundled it up again. It's not that I don't like hand sewing binding - I do - it's rather relaxing.  It's just that it is BIG and unwieldy.  I think I already mentioned that.

It had now become a WISP (work in slow progress).

I was determined that it was going to be finished this year, so I thought sitting in front of the Boxing Day Test cricket would be the perfect opportunity to finally finish it off.  Well, I did a little bit here and there.  However, today was day five, the last day of the Test, so I thought it was time to up the ante and get it finished. 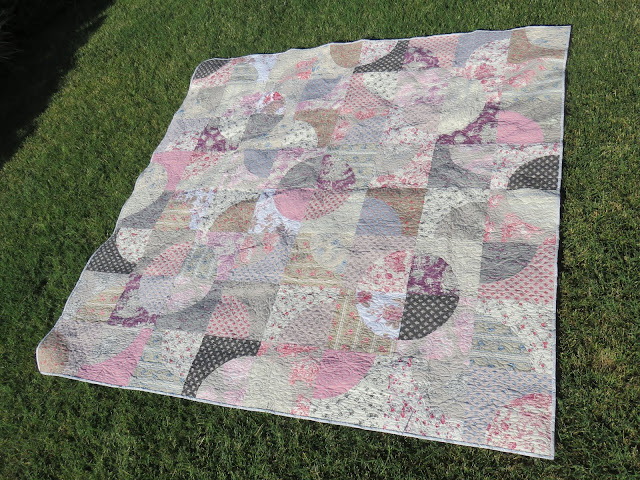 Tad Da!  See - It's BIG.  I had to climb onto the fourth rung of the ladder to take the photo. (That's brave for me.) 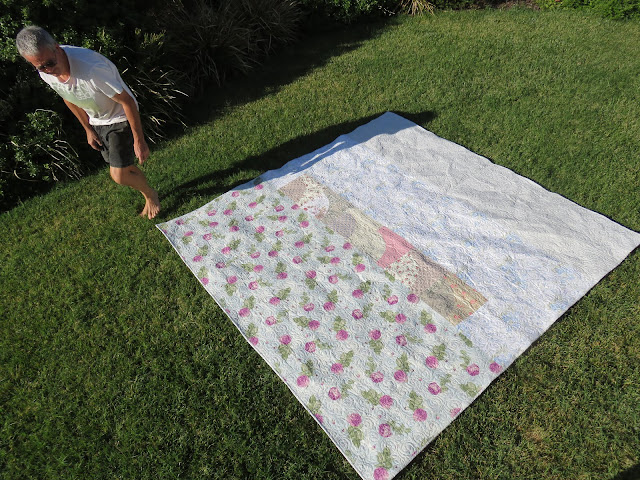 The back, being arranged by my quilt helper.  Unfortunately, you can't really tell the colours too well.  There are three pieces of fabric together with the left over blocks from the front. 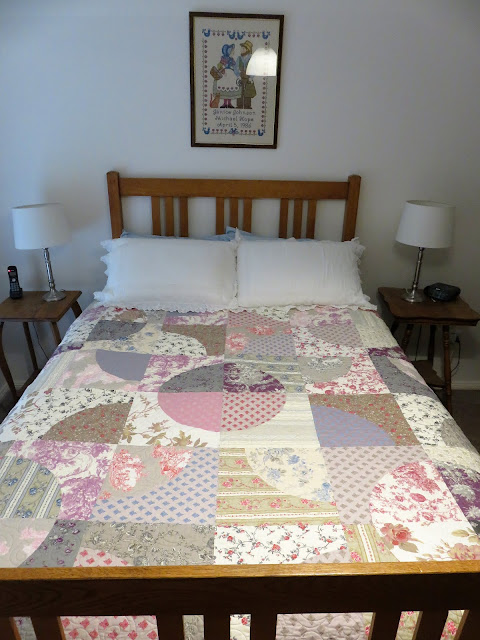 Finally, how it looks on our bed.  Like I said, it is BIG!  I'm used to having quilts of about 72 inches square on our bed as a topper.  You can't see it, but it has heaps of overhang on all sides.  Anyway, it doesn't look too bad.  It may just stay there for a while.

That is one finish that I am very pleased to tick off the list and a nice thing to have behind me for the start of the new year.

It was a huge quilt to hand stitch the binding. I do my bindings on the machine....Well done ✅ finishing it Janice... I think it's looks great on your bed...I like a big quilt on my bed....

Janice it's just beautiful! Well done on finally casting off that mill stone, and getting that bind done. Very pretty & I love the design.
Woo Hoo!
x

Gorgeous quilt! You must be feeling relieved and elated!

Yay!! You finally finished it. I have to say it looks wonderful on your bed.

Well done, such a lovely quilt, a final finish for 2017. Yes, stitching the binding can be a pain, but then, it's the final stage and then the quilt is finally finished. What about a label? have you done that?

Janice, it's gorgeous! Large, yes, but worth the effort, right? x

Lovely quilt and great to have it on show instead of in the cupboard...
Hugz