You may remember that at the beginning of the year I signed up to join in Chooky’s Nature’s Journey stitch along. I’ve posted my progress on the Stitch Along Blog, but neglected to update things here.

February was first month of stitching, but we were in New Zealand for most of that time.  I started my blanket stitch frames before we went away, but knew it would be rather tight to get the month’s section completed. Nothing further was done until the last day of the month.

Seeing as the appliqué pieces are so small I decided not only to use my stash but to dive into my scrap boxes. 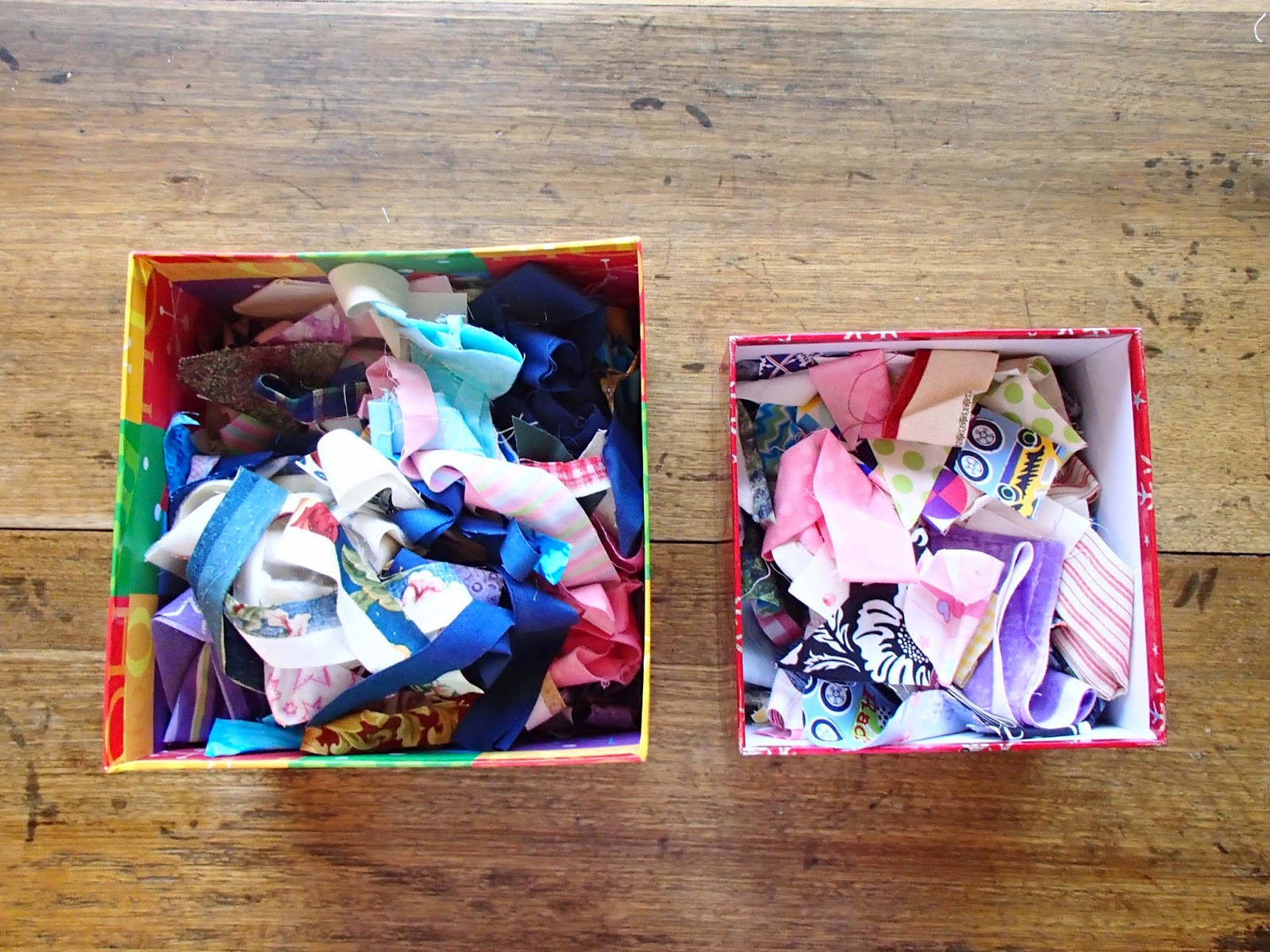 I pulled out the pieces in the colours that suited and there were quite a few.  Some of them were quite small, just crumbs, but it was fun using the tiniest pieces that I could. 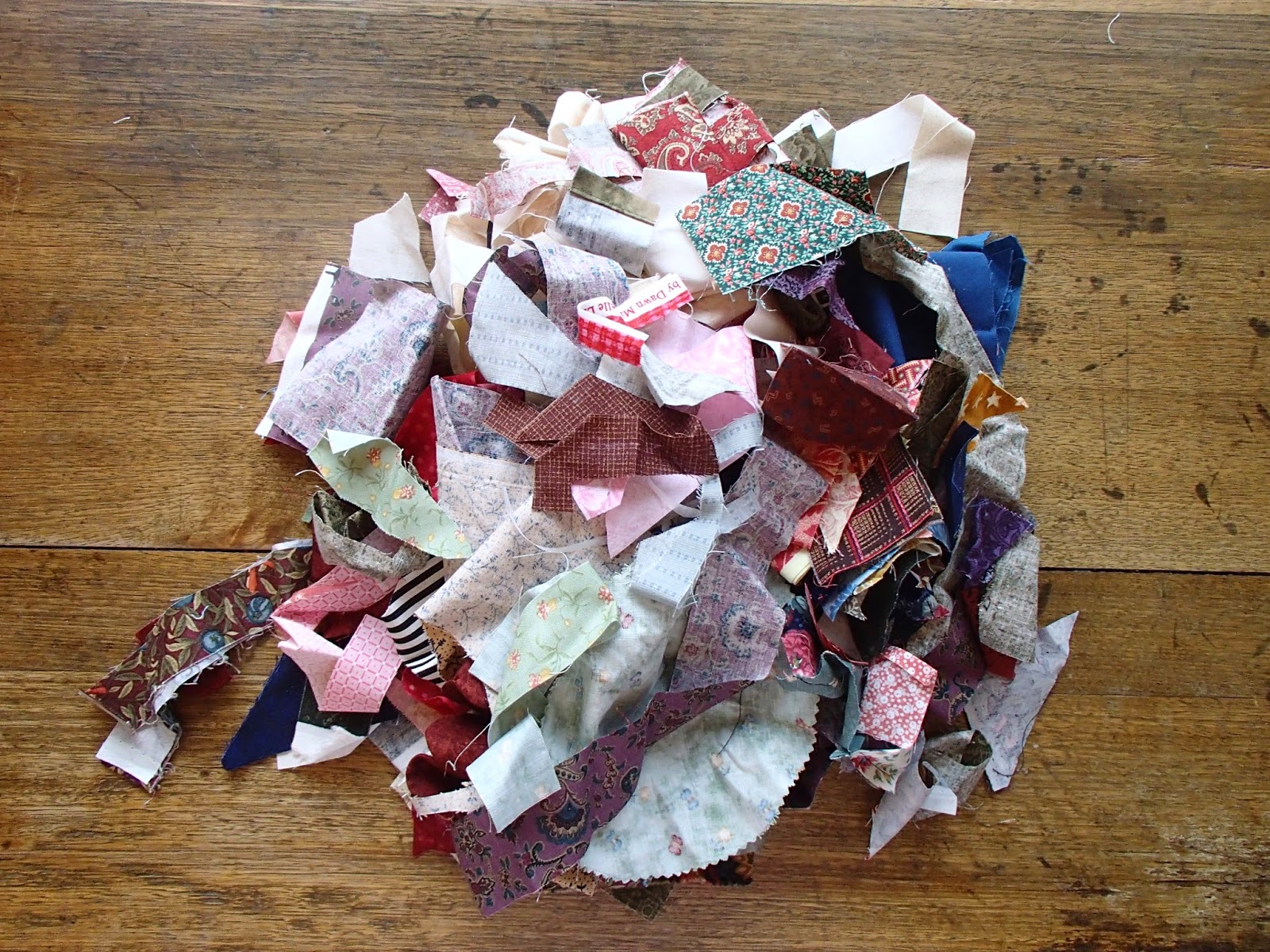 It was at about this stage that I had a visit from a certain whip cracker to check up on me. Fortunately I was working away.  It didn't matter that I was still in my jarmies and bed hair.  Just as well she is a tolerant friend.

I'd like to have used needleturn appliqué, but it was easier, if not that much quicker, to just use machine blanket stitch. 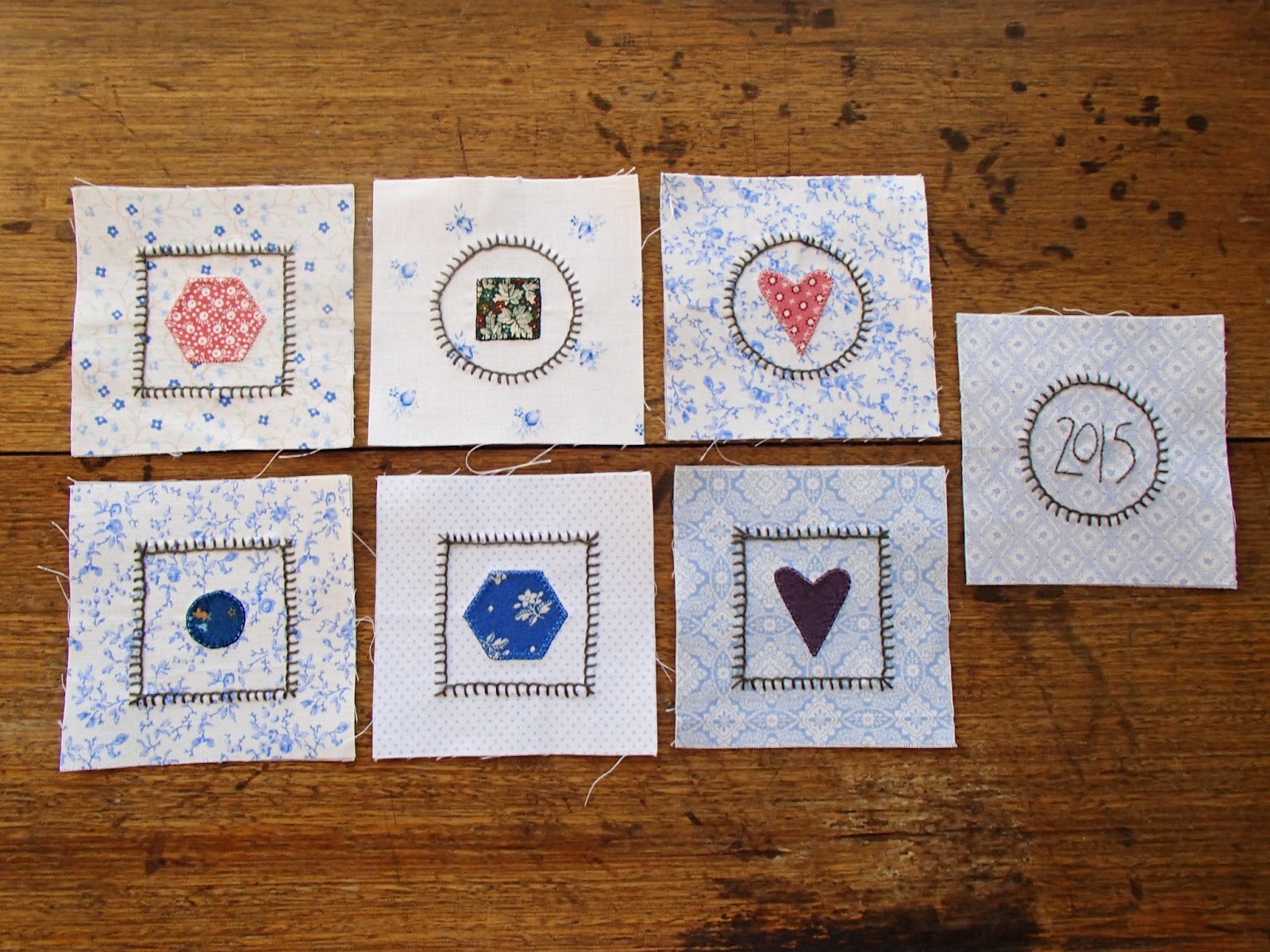 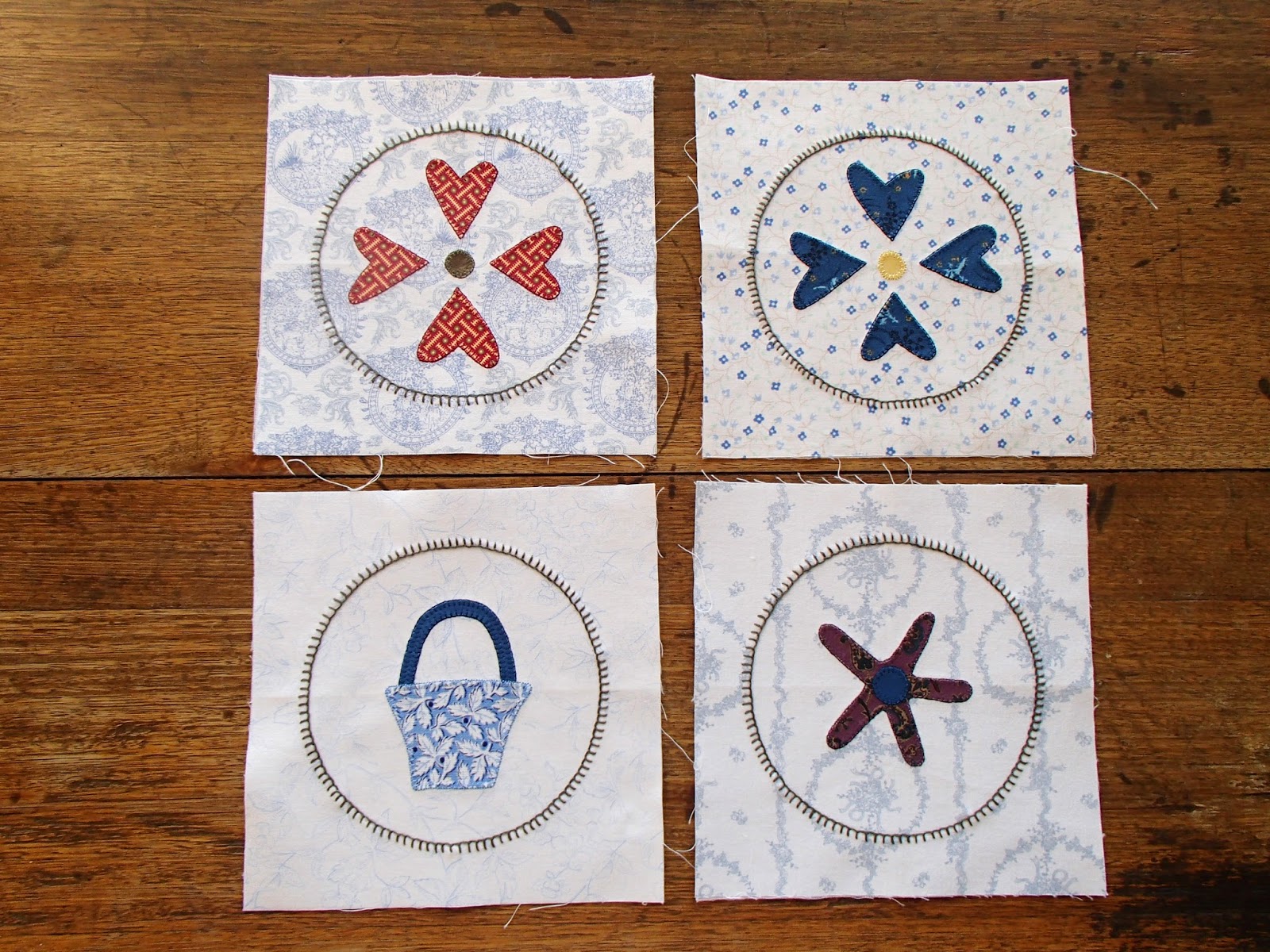 All finished by late in the afternoon.

The basket block has a very special fabric in it. 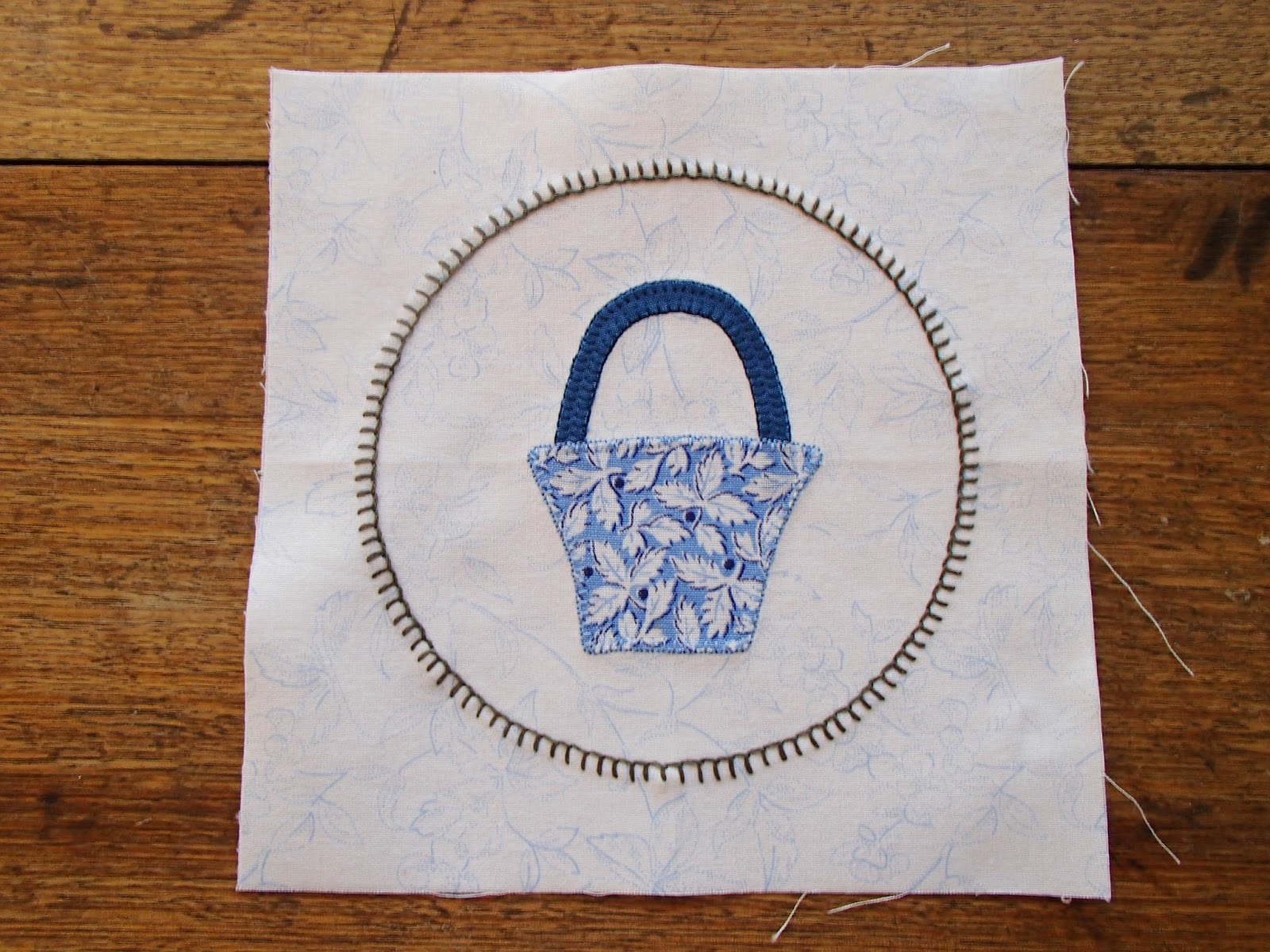 I only had this tiny bit left, which is even tinier now. 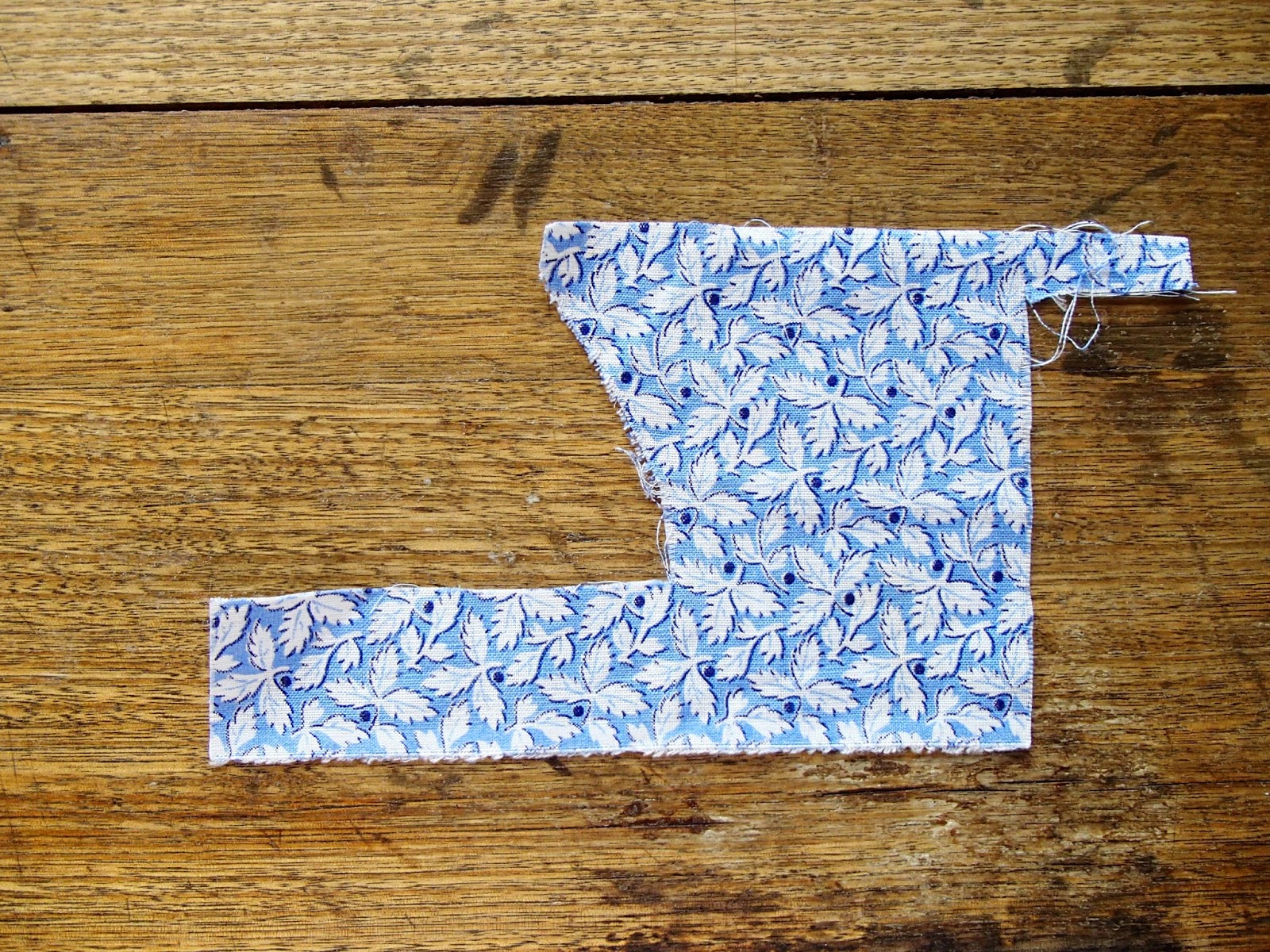 This fabric has a bit of a history.  My grandmother made a wagga/beadspread for my mum in the early 50s, which has a scrappy patchwork back.  There is some of this fabric in that quilt.  It probably dates from the 30s.  One of the very first pieces of patchwork I ever made was an English paper pieced coathanger cover, back in the early 80s.  I used this fabric in that, just a fabric I found in Mum's scrap bag, which then ended up in mine.  It is nice to see it being used over such a long period of time.

We had 10 days away at the end of the month and I managed to finish the blanket stitching for March while we were away.  I even completed a couple of circles towards April - Bonus!

We returned home on the last Sunday afternoon of the month, and after quickly unpacking it was appliqué time.  I was able to get them all finished that evening, thank goodness. 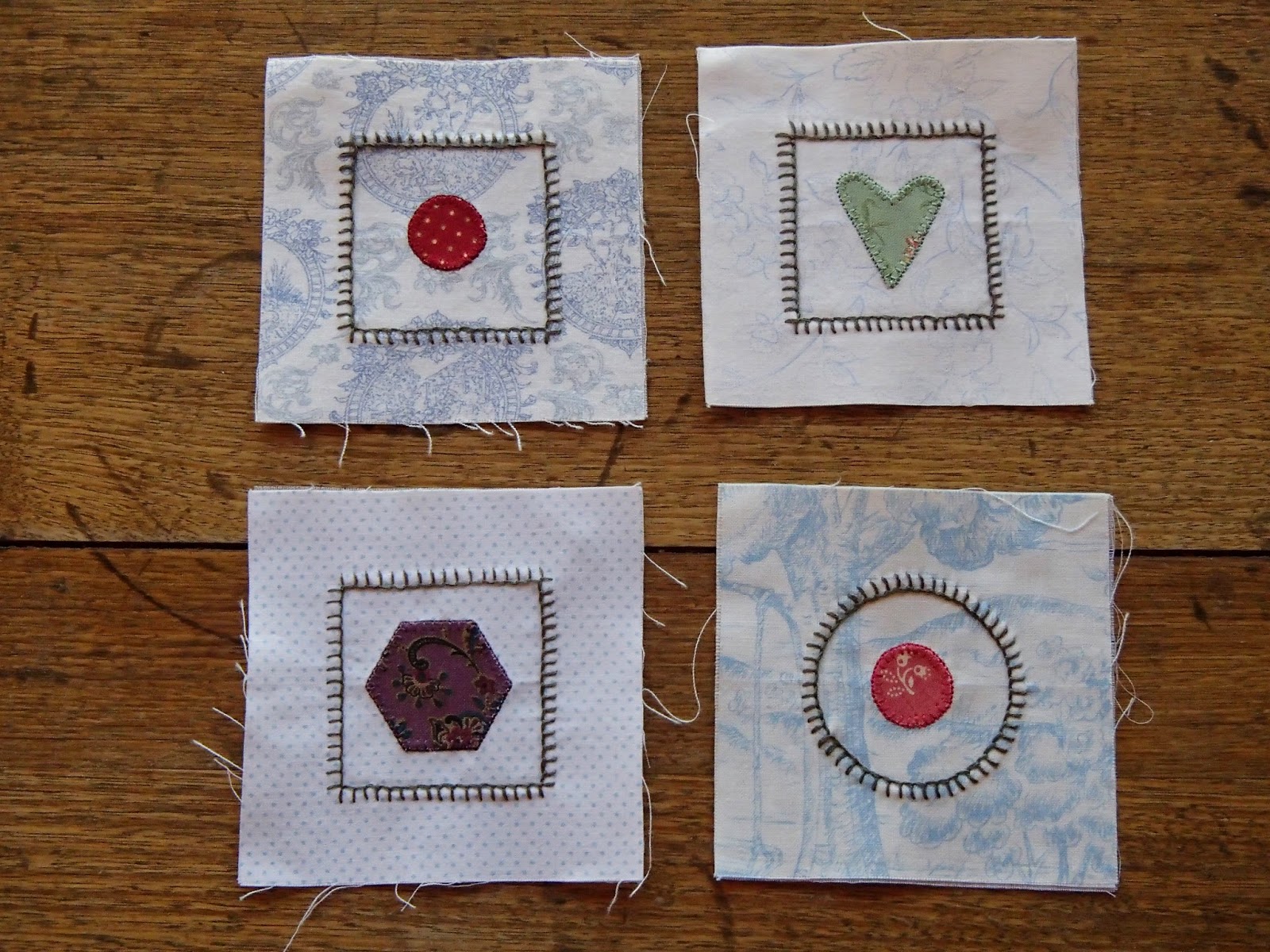 Once again, the fabrics were from my tiny scraps.  The darker of the large stars was from a charm square that had come on a jar of home made jam, so lots of different stories to go with it. 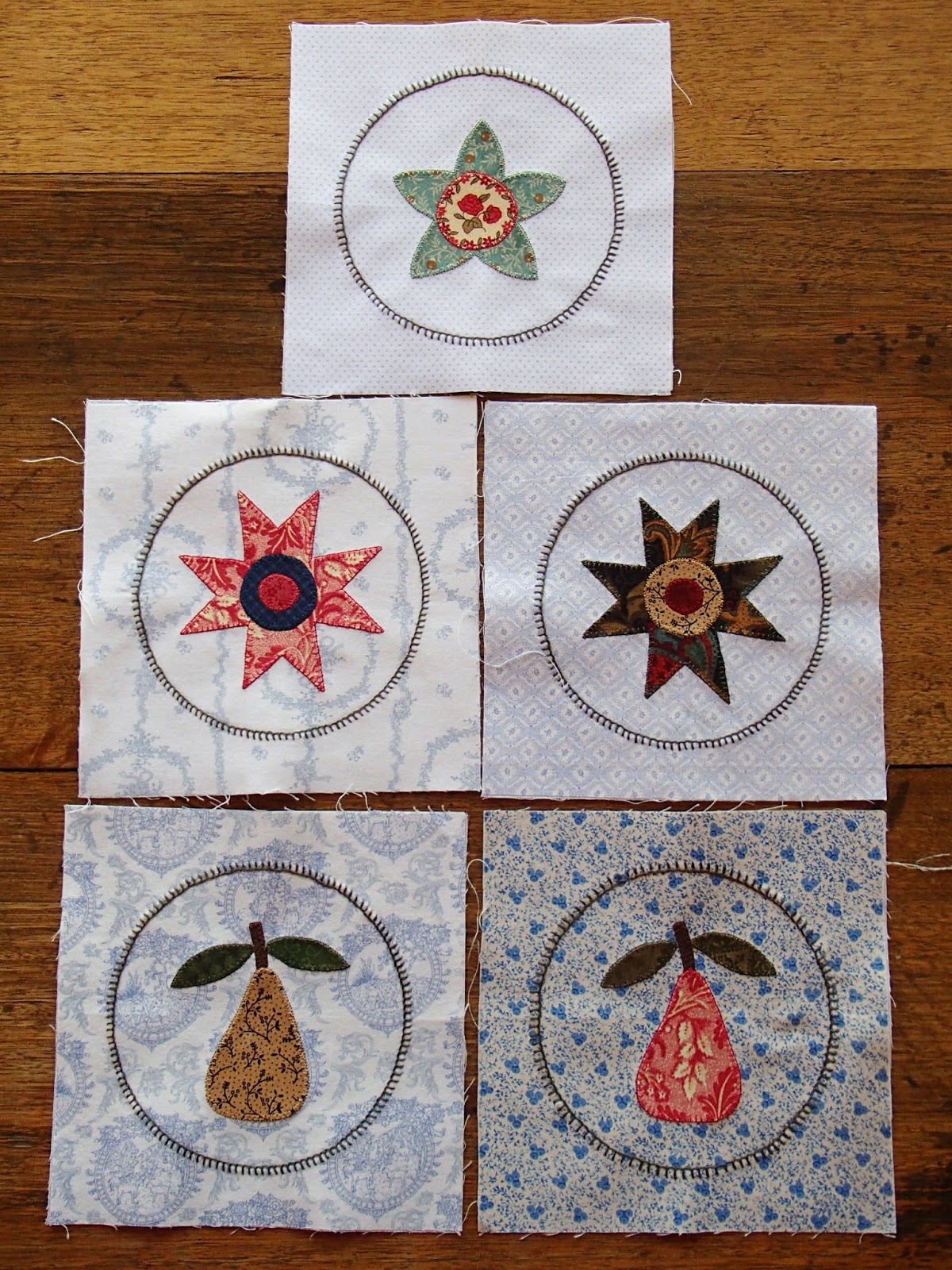 Thanks so much Chooky and Susan for keeping us on the straight and narrow.  Your whip cracking is really appreciated, as this is the only way that I will commit to completing a project of this scale.

Chooky, I do hope you find the time to get caught up.  I'd be scared of Susan's whip.

Labels: Blog Friends, Nature's Journey, patchwork, sewing, Use What I Have

well done......your blocks look great and yes you only need tiny scraps for this quilt........

These blocks are so pretty. I love that you have a special piece of fabric that has a family history, and that you just use little bits at a time.

They look so good Janice x