Remember yesterday I mentioned that they predicted today to be somewhat wintery.  They were right.

We had a rain shower in the morning, but at lunchtime another storm came through with wind and lots of small hail.  In about a quarter of an hour the temperature dropped 8 degrees.  At 1.30pm it was 12 degrees.  At a quarter to two it was 4 degrees!!!!!

In Orange it was MINUS 1.5 degrees.  Yes, on the surrounding hills there was snow!  Remember it is only a few weeks since we had temperatures into the 30s with higher than average temperatures during March.

I took this photo as I left work this afternoon.  It doesn’t do it justice.  The sky was inky black with a double rainbow.  There is snow in them there clouds. 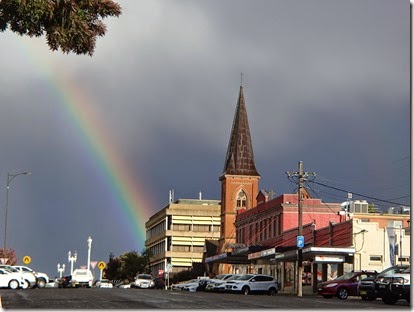 Fortunately, the forecast is for the temperature to be back in the low 20s later in the week, so I won’t pack all the summer tops away just yet.

Rather chilly here too, we lit the fire last night for the first time this season. Good quilting weather.

I read your post on Monday and thought yippee. My husband and I are travelling down from the Clarence Valley to Canberra via Coonabarabran and Oberon to visit rellies and friends. I'm so looking forward to the cool weather, I'll get to wear a winter coat. Thank you for your photos because we are now going to put Hill End in the trip to it looks beautiful