A Bit of a Catch Up

I’ve been somewhat slack and haven’t posted here for a couple of weeks, so time for a bit of a catch up on our goings on.

We have continued to have a couple of more quiet weekends at home, which has been rather nice, now the weather is turning quite wintery.  We’ve already been down to –5 degrees on a couple of days this week.

I’ve still been cooking meals from the Family Circle magazine I bought.  Last week Mick decided it was his turn to choose what I cooked, and he chose a seafood pie which had a marinara mix for the seafood.  Yummy! 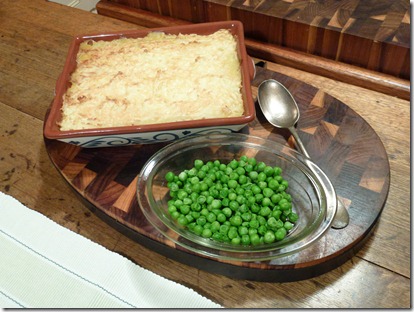 This week I made the chicken noodle soup.  Mick isn’t keen on celery, so I substituted peas.  Another success. 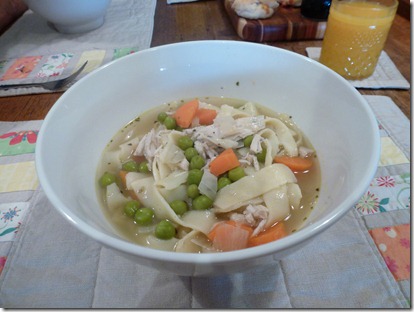 I also made Moroccan Lamb and Lentil Stew, except I’m too ikey to pay nearly $30 a kilo for boneless lamb, so used gravy steak instead.  It was still delicious.  The aroma while it was cooking was just wonderful.

My photos aren’t the best, but you have to be quick when you have someone telling you to stop mucking around trying to be all arty farty, “It’s just a stew for goodness sake!”  Mind you, he is quite enjoying me trying a few new dishes. 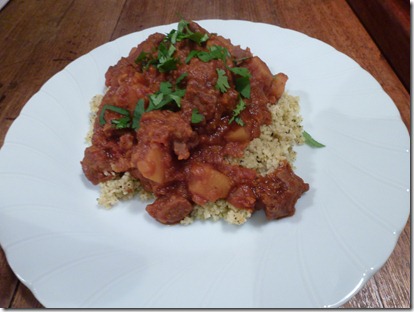 So far all the recipes have been simple and very tasty.  I’ll keep trying some more.  I’ve also been making cakes and slices each weekend as well, using my old faithful recipes.  Wonders will never cease.  It is amazing what can happen when you actually stay home for a change.

During the last couple of weeks we have been listening to the Isle of Man races on the Manx Radio at night.  Oh, the wonders of the internet.  This time last year we were there, this year we are just wishing we were there.  However, the weather hasn’t been the best, so maybe it was a good year to be listening from afar.  Our Aussie contingent (of 2 riders) did quite well.  Cameron Donald came 2nd in 3 races, which was fantastic.  (This is us with Cam last year.) 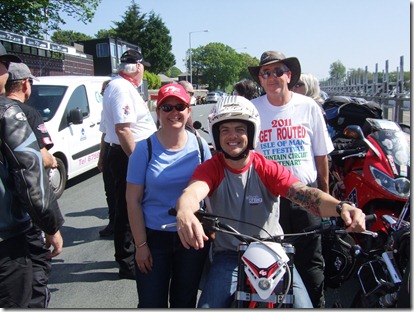 David Johnson, the other Aussie rider was finishing well up the ranks as well, and it is only his second year competing. Unfortunately, the major race had to be cancelled due to the weather.  Only the third time ever.  It must have been very disappointing for all involved.

On Saturday I went along to my little stitching group.  We have had a break for a few months, so it was nice to all get together again.  I worked on my Some Kind of Wonderful quilt.  I’ve been on a bit of a go slow with it – or rather a stop and just haven’t had the inclination for a while.  However, this weekend I have finished off four blocks.  They aren’t in any particular order, but it is still progress. Now I’m itching to get a wriggle on and catch up. 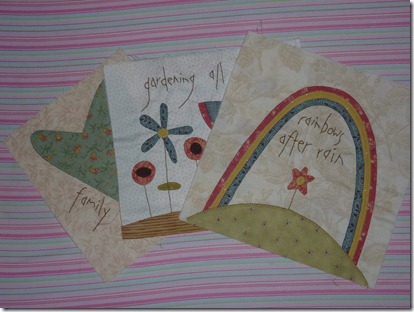 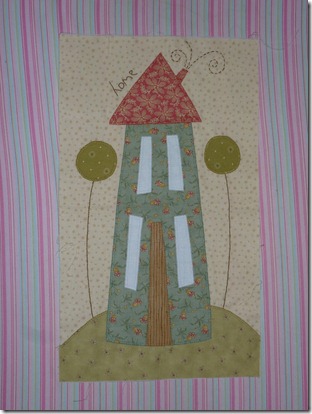 However, I have another little project on the go using the scraps from Mick’s quilt, which has a closer deadline.  The design process has taken a little while.  In other words, I’ve been procrastinating and just didn’t really know where to start.  Today I made this “Mini Twister'” block.  The “Twister” ruler I used for Mick’s quilt is used on layer cakes, the “Lil’ Twister” is used on charm squares and I made this one up out of template plastic for a 3 inch square.  It is tiny and a little fiddly, although it would be fun to make a miniature quilt with them…..but I digress. 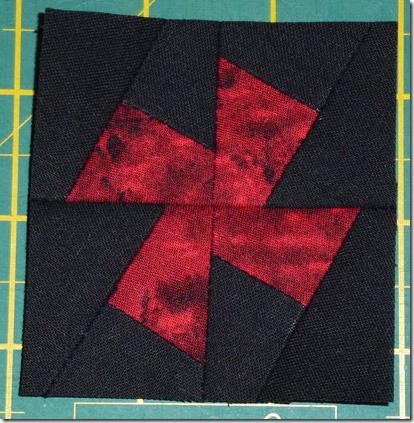 I had previously made this row of blocks to make a row of mini twisters, but silly me, having worked out all my measurements and made the template, forgot to add seam allowances when I cut the squares, so I’m just leaving them as this block.

I have also made a mini log cabin block. 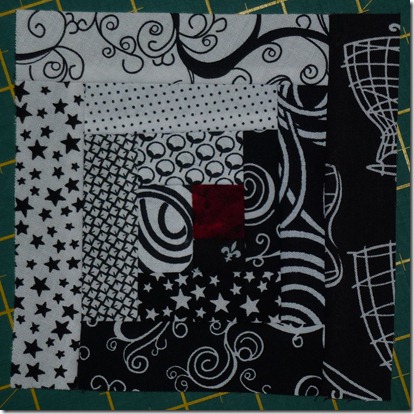 This is how I’ve used my min twister block.  The finished panel is about 14” x 10”.  It was rather time consuming, but fun.  I just drew a square with radiating lines.  Then I just grabbed scraps and cut them for the random piecing in each segment using foundation piecing. I was going to insert the square with “Y” seams, but when my square  hole ended up not quite square I changed my mind and will blanket stitch appliqué the square on to the background, much easier. 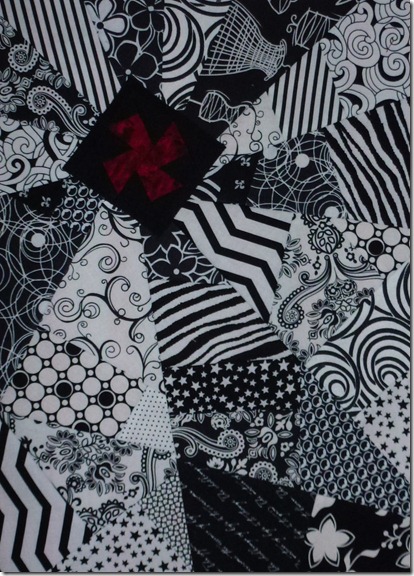 Now you’ll just have to wait till I finish off the project to see what it is……..and if it turns out as I hope.  It is just one of those things that is growing organically….. no real plan, just a rather vague concept…….not like me at all. 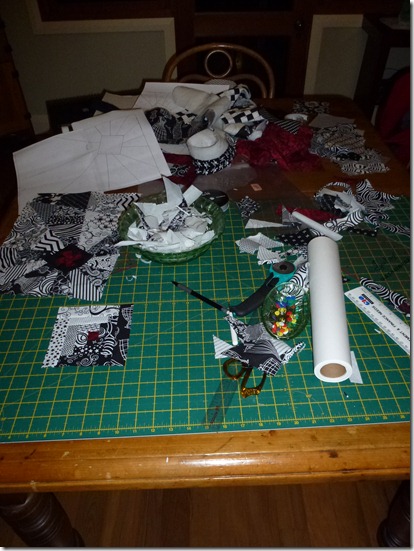 I’d better get a wriggle on so that I can clean up my “creative mess” on the dining room table, don’t you think. (It’s already been like this for a week – oops!)

I'm sure Mick won't mind the mess if you keep cooking like that. We all need some new recipes now and then.