My Other Non-Stitching Goals for March Round Up

As I said in my last post, the world in which we live now is very different to the one at the start of March and therefore had a great influence on what we got up to.

Along with my stitching goals I had a few other goals for last month. Let's see how I went.

Our plan was to go on a Saturday afternoon ride with the Panorama Club.  Can you believe it, it rained.  No ride!  We weren't going to be able to go on their full day ride later in the month as we were to be away in our caravan.  So, no ride, and as it turned out, no caravan weekend away either. 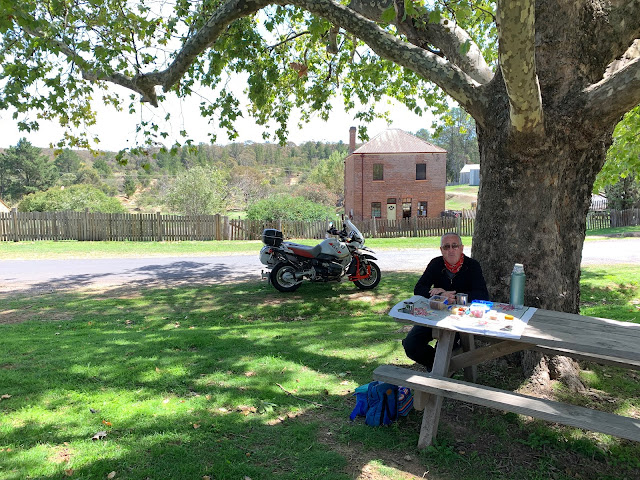 We still made the effort to have a ride, heading out to Hill End.  Aren't we glad we did, as I don't know when we will be allowed to go anywhere for the foreseeable future.

2. GO AWAY FOR A WEEKEND

I thought we had this well and truly covered for March.

Firstly, we planned on taking the caravan out to Oberon and camp overnight at the Oberon Swap Meet, having a stall there.  Guess what?  It was bleak, cold and raining.  Not quite as bad as the Newbridge Swap in February that we didn't go to, but not worth camping.  We did go out and have a stall, but no camping.

Secondly, last weekend we were to take the van to Gulgong for an Atlantic Caravan Rally.  There were to be about thirty Atlantic vans in attendance and about sixty people.  Early in the month, Atlantic called off the rally, but several, including us, still intended to go.  We figured we could still get together, just keeping our social distance and not sharing happy hour nibblies.  As the weekend got closer, more and more restrictions were put in place, so most of us abandoned ship.  Some had even already arrived at the caravan park.  In the end caravan parks have been closed to travellers, so it was abandoned.  Very sad, but hopefully it can happen next year.

Finally, this coming weekend was to be Scrub Stitchin' at Baradine, where about 20 stitching friends would get together for a long weekend of stitching, chatting, eating, drinking and enjoying each other's company, considering most of us only catch up once a year.  We were going to take our caravan and Mick was going to have a lazy weekend.

Conversations started at the beginning of the month about whether or not it would proceed.  The tone progressed from yes, as long as we take precautions, to no, this is not a very good idea at all.  It was cancelled a few weeks ago.  Chookyblue still has a plan for us to work on a project together.  We have all been sent a package with our project and strict instructions not to peek.  We are waiting for further instructions, but I'm guessing we will all be working on our projects this weekend, just not in the same room.

So, this goal has been a failure for me every month this year, and won't even be a goal from now on, until things change drastically.

It looked very much like this would be a failure too, as I tend to be a binge reader.  Once I sit down to read a book, I don't do anything much else until it is finished.  The upside, is that when I start a book, it is over and done with pretty quickly.

As we neared the end of the month I realised that I was not going to have time to sit and give The Book Thief the attention it deserved. 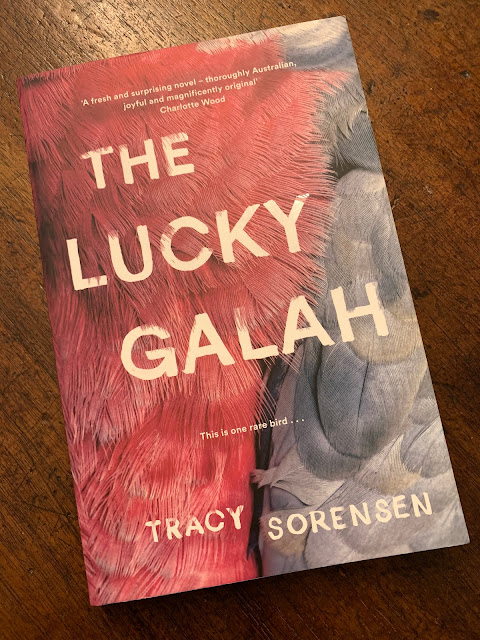 I noticed this book sitting on the shelf waiting to be read.  It would be a quicker, lighter read.  The Lucky Galah is written by a local Bathurstian and has been short and long listed for quite a few literary awards.  It was an enjoyable read, reminding me of so many things about Aussie life in the late 60s and early 70s.

I couldn't quite believe it when I read the following passage early in the book. 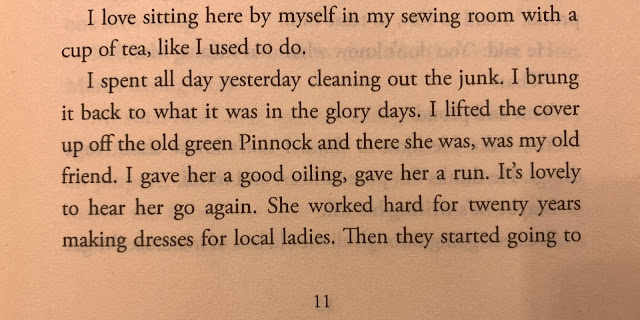 I didn't even know that green Pinnock sewing machines existed until the beginning of the year, when Mick bought one.  What a coincidence.

Hopefully, next month I will read The Book Thief. 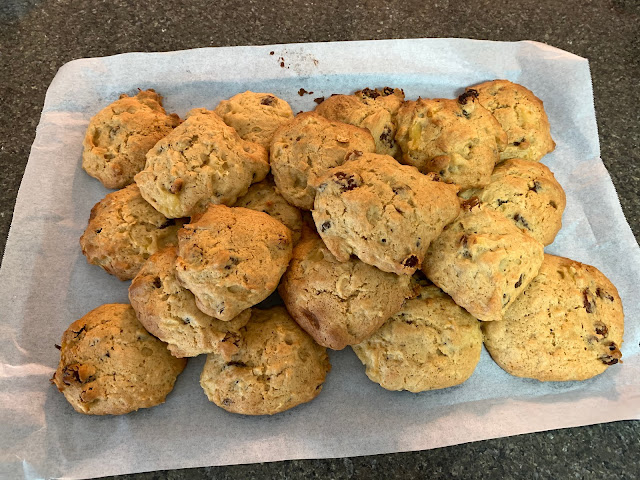 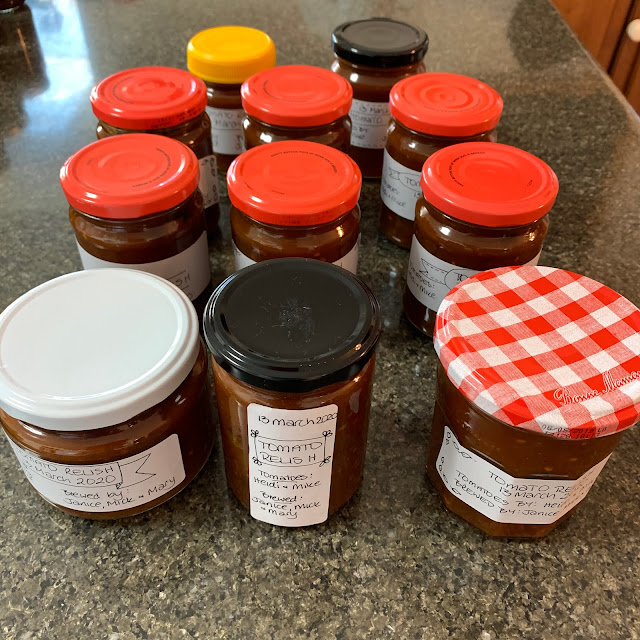 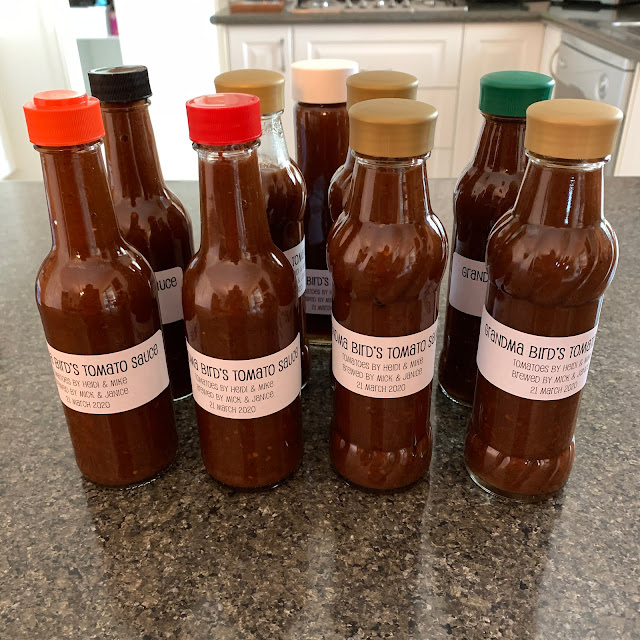 Not only that, we made Tomato Relish, Plum Chutney, Tomato sauce have have frozen beans and raspberries.

To top it all off , on Sunday Jenny from Elefantz shared a recipe for Apricot Shortcake. 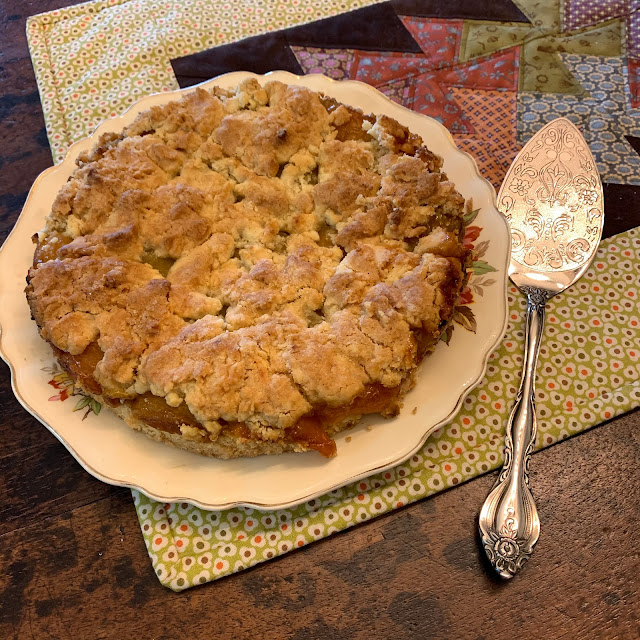 I just happened to have all the ingredients in the pantry and even some dollop cream left over from the previous weekend, when we had friends around for a barbie - something else that won't be happening for a while. 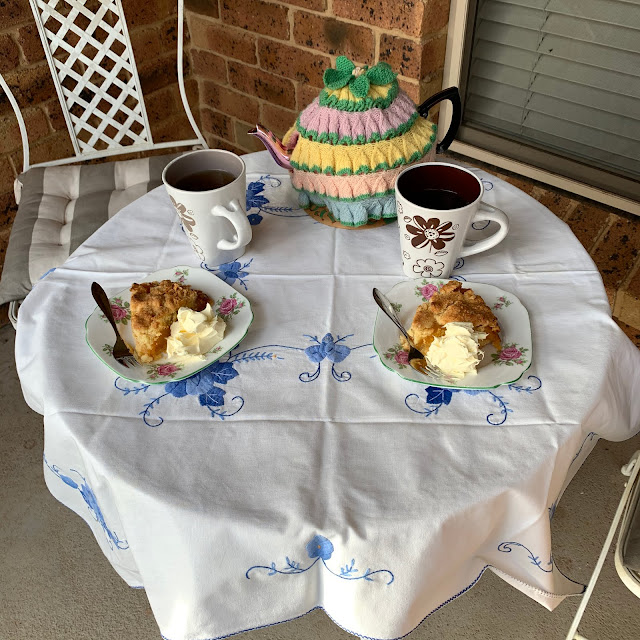 Another afternoon tea on the verandah, this time even with an embroidered table cloth.  It was sooo good!  This recipe is a keeper for sure.  Some rose infused black tea accompanied it.  Very civilised.

So, considering the tospy turvy world we live in I didn't do too badly.  I'll have to reconsider my goals now that we can't get out and about, which, as you probably know, is something we really enjoy doing.

A mug comment - I have the same mugs as in your photo. Need any more? LOL

Getting out and about, that's something we will be hanging out for once all this is over. In the meantime, we stay home and keep ourselves occupied. I'm very impressed with your bottling efforts, well done!

Oh my! That passage about the sewing machine.... I bet that stood your hairs up a bit! LOL
I'd say we have done ok considering how much has changed in a month. Your missed trips can be forgiven and you did achieve a lot more.

Well at least you packed in as much as you can these days.
Stay safe...& enjoy your Green Pinnock...xox

Wow!! Amazing you came across that passage in the book!! Gave you goosebumps I bet. You have done well with your preserves and sauce. The apricot crumble looks amazing, you had a very civilised afternoon tea. Life will be different for us for a while, we are planning all kinds of outings once we can get out and about again.

you got some yummy things done.... enjoy your home time....
Hugz