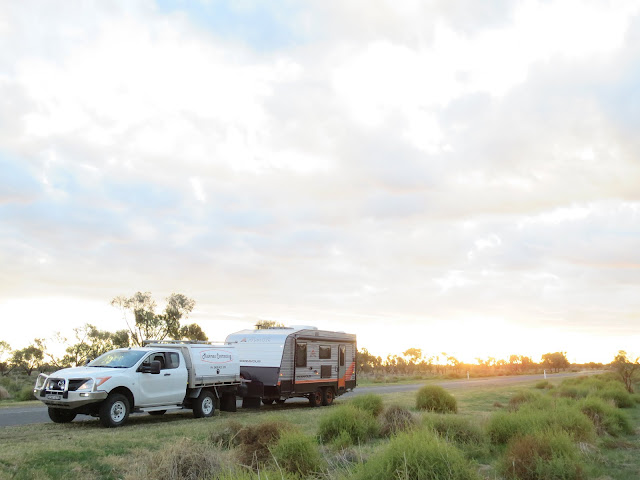 After we left Coonamble we started to head bush. 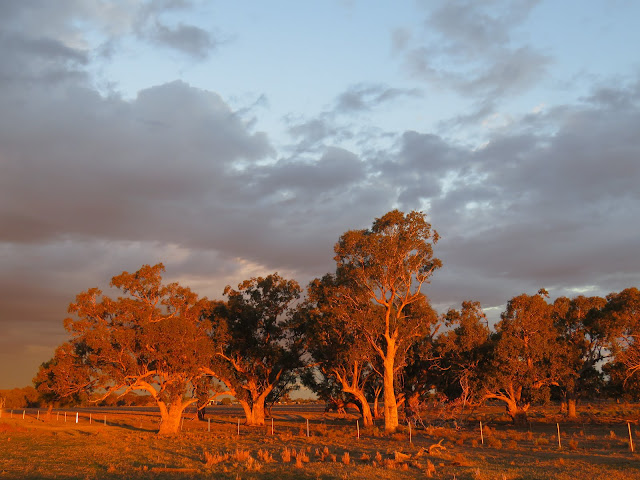 The colours in the landscape were truly stunning as the sun lowered. 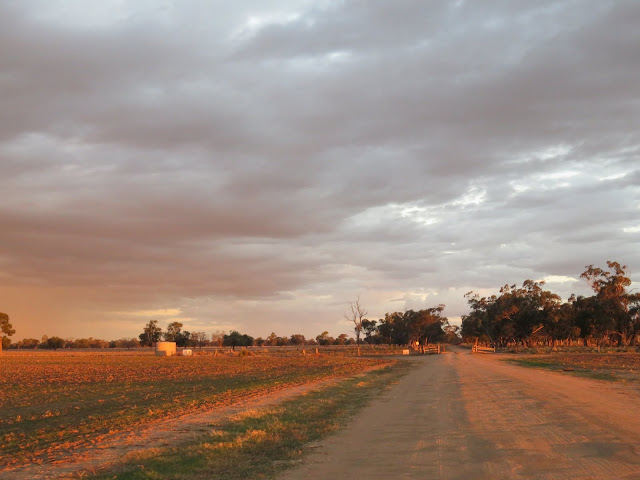 This was the first time we had taken our caravan on dirt roads, so we were interested to see how it handled them.  All was good, as the roads were in a fairly good state.

It was after dark that we arrived at our destination - Chookyblue's home and The Chook Shed.  It was just starting to rain a little as we arrived, but not enough to be of any consequence or use. 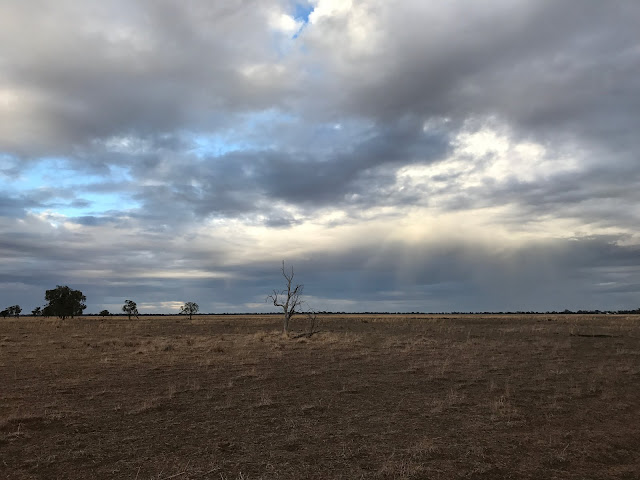 After a very social evening catching up and a good night's sleep we joined Chooky in a short walk the following morning.  The view is so vast.  There were scattered rain clouds in various parts of the sky.  Just teasing everyone. 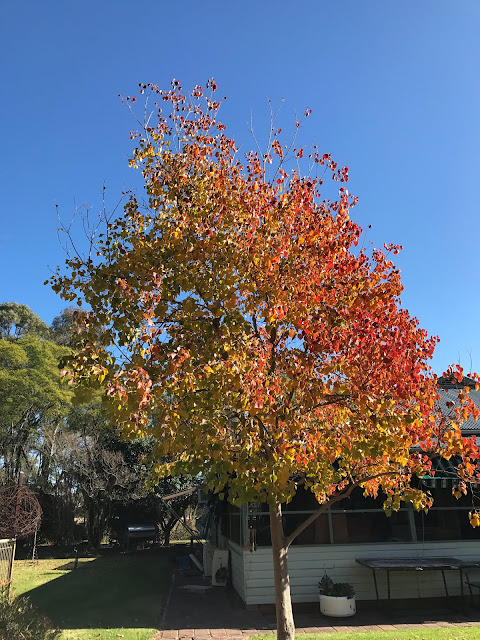 When the sun came out the Chinese Tallow tree just glowed.  Most of the leaves have fallen here in the Central Tablelands, so it was nice to see some colour.

Then it was time for Mick to join Mr Chooky in farm stuff while Chooky and I adjourned to the Chookshed with another friend to do some stitching. 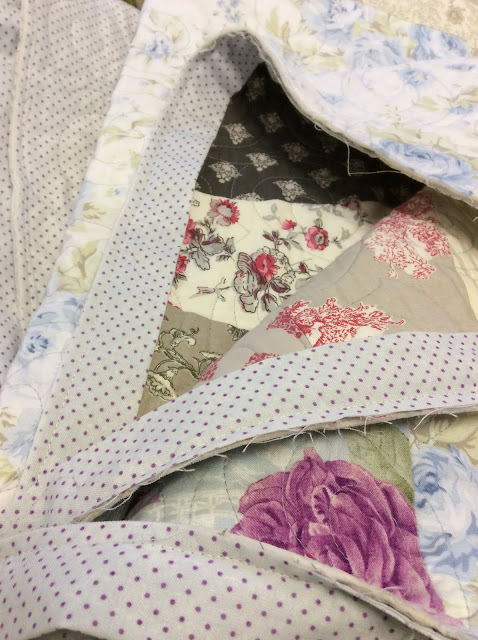 I finally added the binding to my drunkard's path quilt.  I still have to hand stitch it down. It will happen, all in good time. Not a good photo, but it is so large.....

If you sneak over to Chooky's blog post you will see what the others got up to.

At the end of the day we decided to have another attempt at creating the mini pincushions that were made at the Chookshed party on the previous weekend. 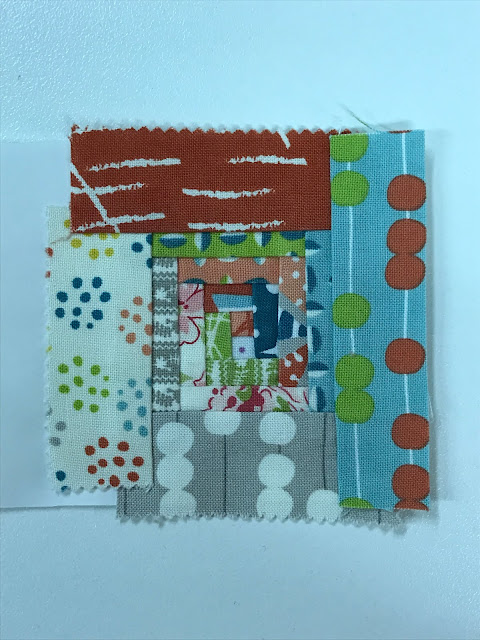 Here is my little block before being sewn to the backing.  I think we had better  luck after seeing how things went last time and making our fabric strips wider than the pattern suggested. Those finished internal strips are only a quarter of an inch wide!!! 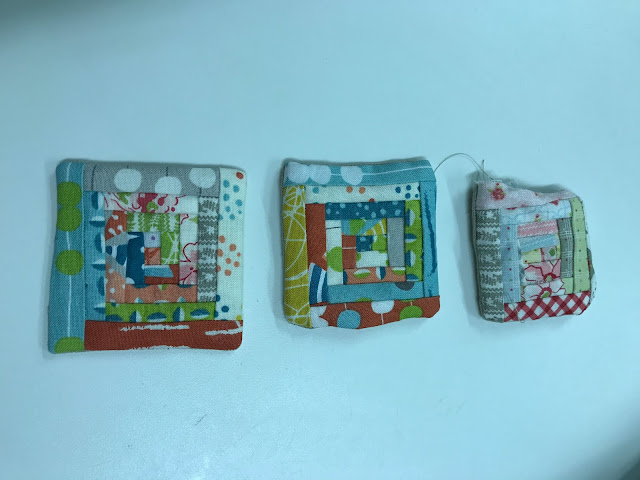 And the pincushions ready to stuff.  The right one is Chooky's fail from the previous week, but our new ones look to be OK.  They are tiny, only 2 1/4 inches square.  Now I have to find my walnut shells and finish it off.  It shouldn't take long.  It may get finished before my quilt binding..... here's hoping. 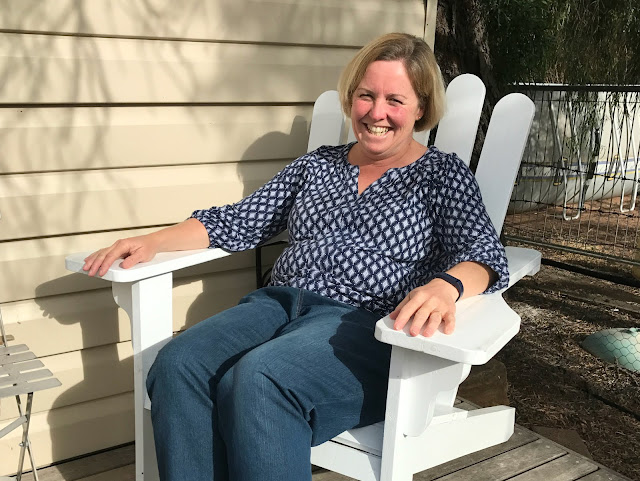 And finally, the hostess with the mostest herself, in her favourite chair on the Chookshed deck. Thanks for a wonderful weekend spent with you.

It's always so interesting to see your Aussie landscape photos - so different to what we have here "over the ditch".
Another lovely camping w/end, with a little sewing on the side - good stuff indeed!

Have been browsing some of your previous posts Janice...
Hubby and you have been to some beautiful places, including quilt shows...Like you i like scrappy quilts, lots of amazing ones to see.
How nice to have also spent time at Chooky's place...

might find myself on that chair sometime today for a cuppa........
everything is so dry here still.........your captured some great shots........and the tree is bare now.....
so pleased our pincushions turned out right....

Great photo of Chooky!! Such a great smile!! Those pincushions are impossibly tiny. It all sounds like a wonderful time was had by all.