Finally, on Saturday morning I had the chance to start playing with Trail Mix. 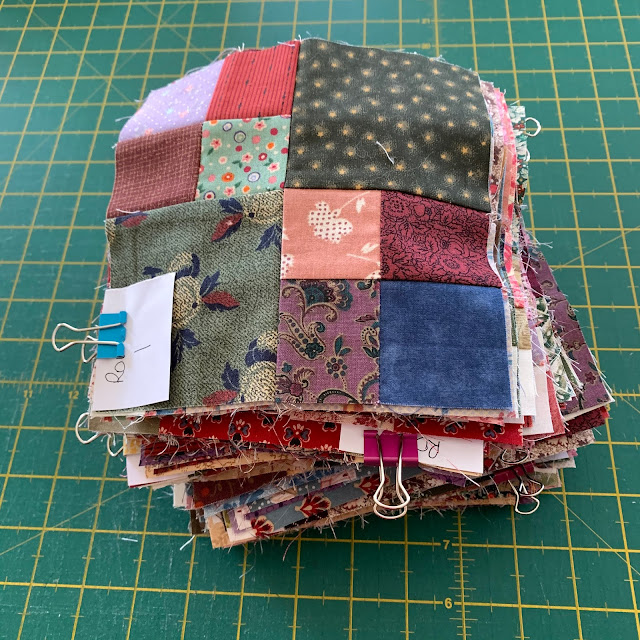 It's hard to believe that this little pile will turn into a large quilt. 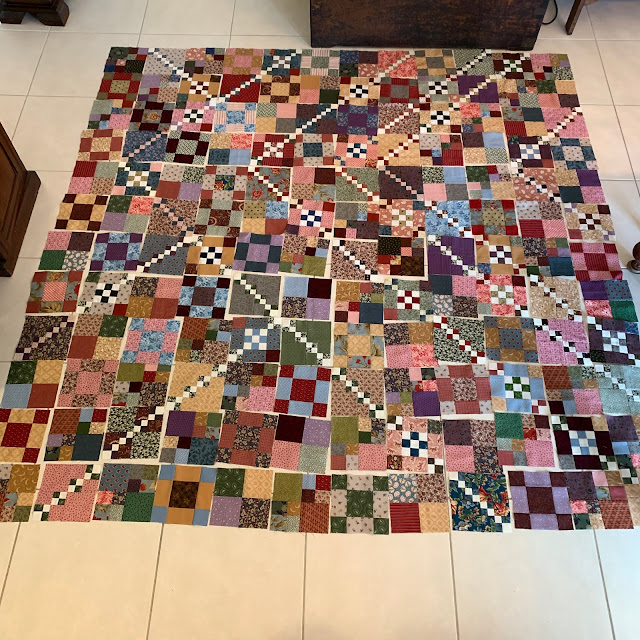 I lay out all the blocks on the design floor and after quite a bit of fiddle faddling decided that this will be the final layout.  I could have spent ages longer, but this will do. Joey decided to "help" at the start, but soon got the hint that I could manage on my own.  Normally, he would be asleep, but you know what it is like with cats and quilts. 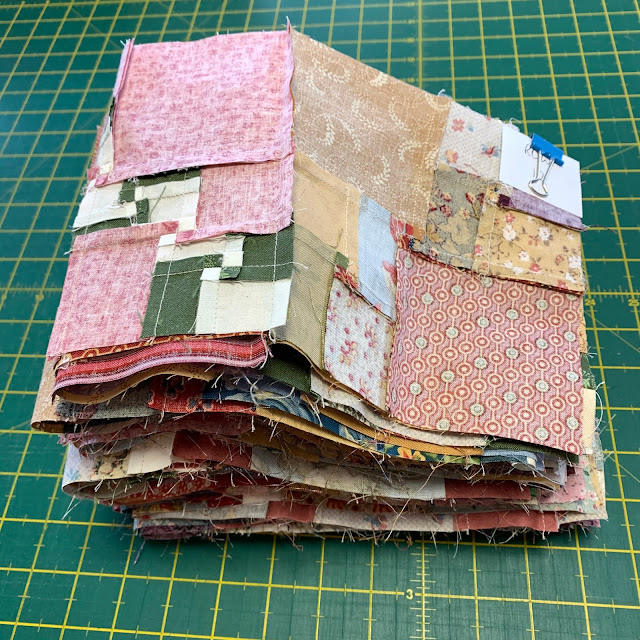 By the end of the day all the blocks were stitched into their rows. 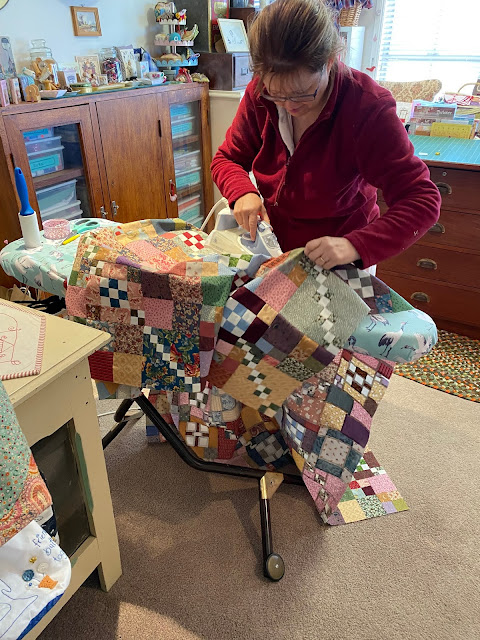 On Sunday morning it was time to start joining the rows together.  Mick caught me at the ironing board, still in my jarmies, pressing the seams. 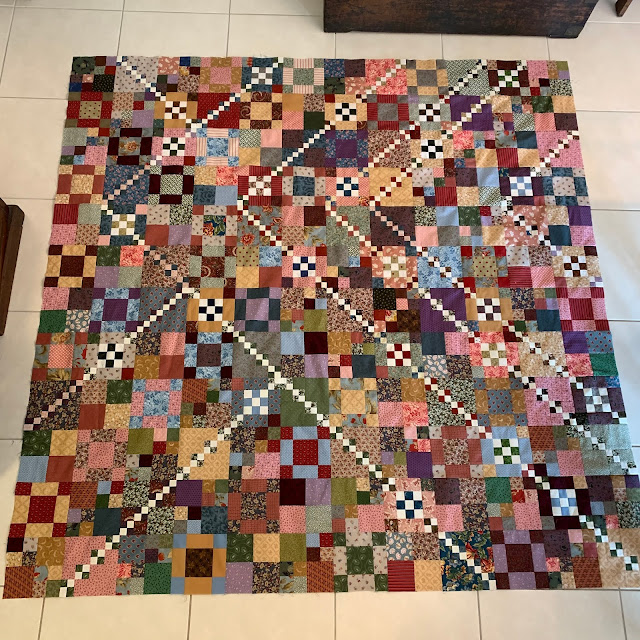 Ta Da! All the blocks together by mid morning.
Next, to audition borders.  I quite like the look without borders, but to get the size I'd like would mean at least twenty five more blocks, or fifty two more blocks if I did another complete round.  That wasn't going to happen.  I was itching to get this finished. 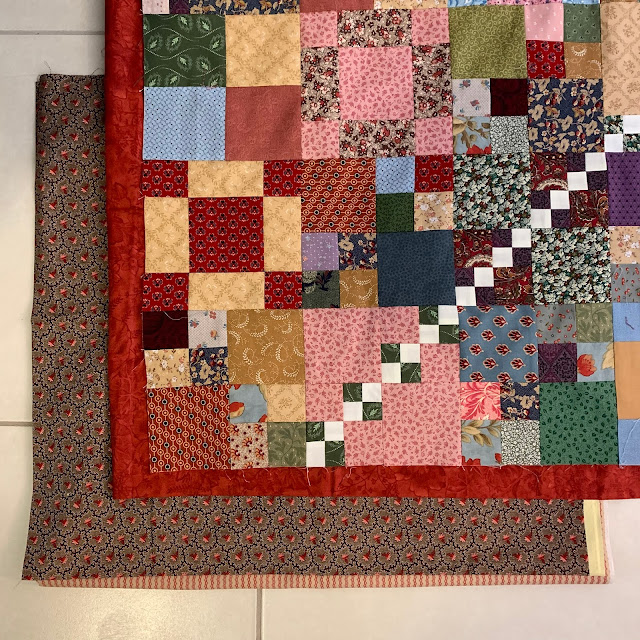 The aim with this quilt was make it entirely from stash.  I can't really call it a scrap buster quilt, as I don't have a scrap sorting and cutting system.  Most of what I call "scraps" most people would call "crumbs". I did use up the last of quite a few fabrics, but many others were cut from larger pieces of fabric.  Anyway, back to the borders.  After ratting around in different storage areas I found some red, which would work as a narrow border and brown with pinks that would work as the outer border.  I was rather pleased with the look.  It was nice and rich, which is the look I'm after. I was also happy with the stripey fabric that will work well for the binding.  I really don't have that much yardage, so was super happy to find fabrics that worked so well.
Back to the iron, cutting board and sewing machine. 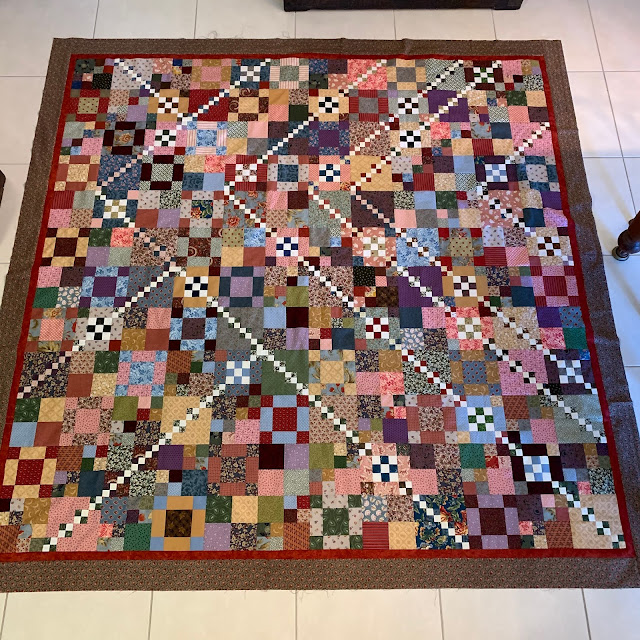 Ta Da!  By late lunch time we had a completed quilt top! I really love the look of it. When I first saw the pattern I thought it looked  nice and warm for winter and that is just how this one has turned out. 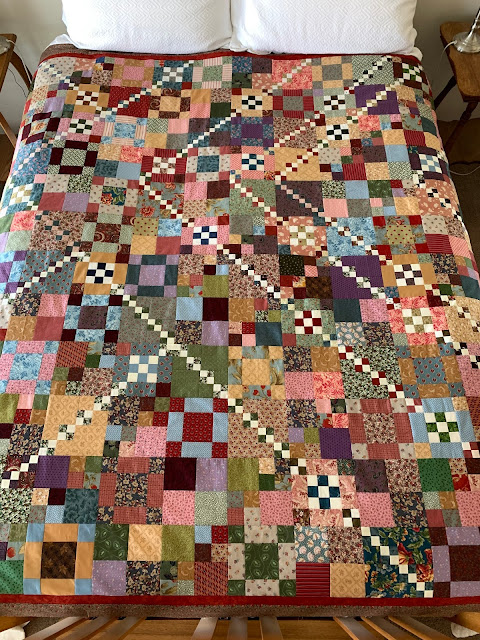 I just had to see how it looked on our bed.  It is a good size.
Next, to find a backing.  Having said I don't have a lot of yardage, I do have a tub full of large lengths of fabric.  Many years ago I was in Spotlight one day when they were selling off end of bolts for next to nothing.  I came home with heaps of fabric that I thought would be suitable for backings.  It worked out at less than one dollar a metre.  I have used lots over the years, but still have quite a bit. 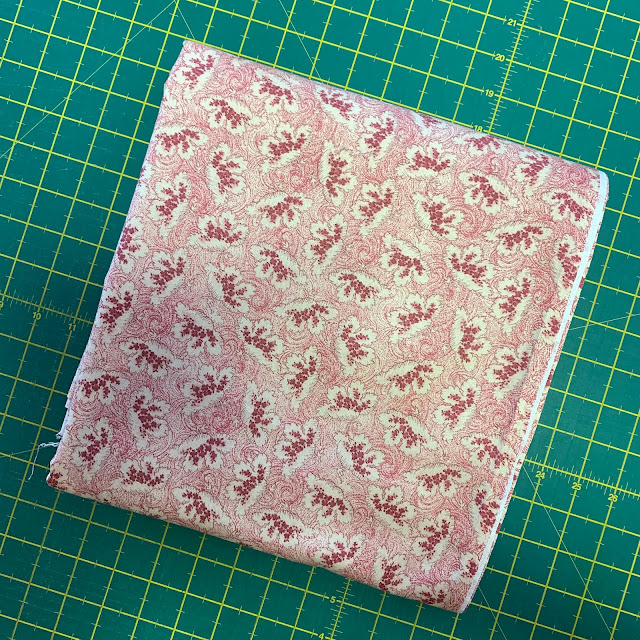 This fabric isn't terribly exciting, but will work on the back of this quilt.
Therefore, the entire fabric content in the quilt is from stash.  That is what I call a great win.
To top things off, it has already been delivered to my friendly long arm quilter to work her magic on.  The quilting will just be swirly.
As the makings of the quilt were free, I have splashed out on a wool blend batting.  This quilt will be used on our bed during the winter, so it is worth making it nice and warm. 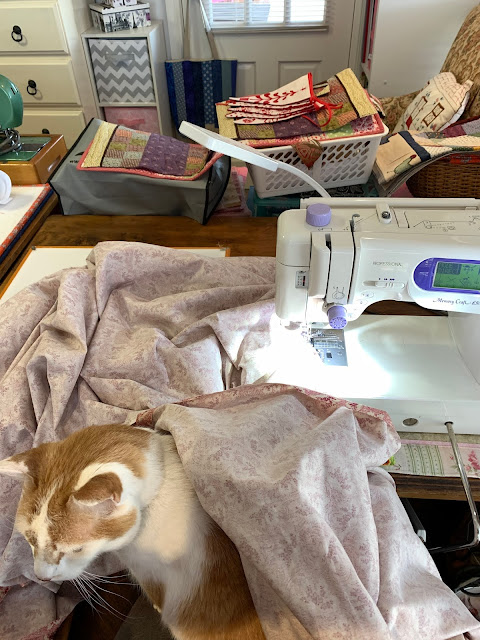 By the way Joey had to "help" with the stitching of the backing fabric.  He has taken to wanting to sit on my lap while I sew at the machine.  Not so bad with small blocks, but not the best on something large.  Thankfully, he got sick of having fabric over him rather quickly and went back to his basket.
I'm so pleased with the way this quilt top has turned out.  It was a very good spur of the moment to decision to make it.  Thanks Deana for the inspiration.  Maria decided to make one as well at the same time.  We have all reached the quilting stage (I'm the only lazy one who has outsourced the quilting), so it will be fun to see them all finished soon.
At the end of the month I will be linking up with One Monthly Goal.
Posted by Janice at 16:30

WOW! All done and at the long arm quilter .
Your Trail Mix looks fantastic Janice. Your borders , binding and backing all work perfectly....
Great decision to sew it out to be quilted... my shoulders are feeling it....

Wow. Fantastic effort. It looks lovely and the backing will match perfectly. I still like this enough to make it one day. You all are a great inspiration. I am impressed.

Janice that looks fantastic...I too have it on my list of to dos (some day!)...love the two borders you popped on.

Gorgeous. Creating is such a joy. I love your quilt.

Beautiful! This quilt is on my 2021 project list, I love the way they all look.

Well done, you have certainly been working hard on this quilt top! Wool batting is a wonderful choice for a winter quilt, so nice and cozy.

Well done Janice, it looks fantastic, and seemed to get to the quilting stage quite quickly, it will be a beautiful quilt for winter. Good to see Joey on the job.

It looks fantastic Janice! I love it! Glad to see another PJ girl after my own heart lol!

You two girls certainly wasted no time on getting your Trail Mix quilts done. Great job and all from your scraps. Well done.

Love, love, love your trail mix quilt. Wish I didn't have so many UFO's and other jobs on my list as I would be so tempted to make one, and could easily do it with stash. Look forward to seeing it quilted, someone has to send quilts to the longarmer, they need work too! (Insert winky face)

Oh wow it looks head Janice.... Well done on getting the top done.

it looks great - perfect borders & bindings
That seems to have gone very well considering when you started.

Hi Janice wow your quilt looks absolutely amazing ,i love it and how good does it look on the bed,great to see a pic of you ,you are looking well.lol what a character Joey is,hope you and Mick are well my friend,take care xx

The borders you chose are perfect. Great finish.