Finishing a UFO For June

I have quite a collection of UFOs.  I keep saying that I will do something about them, but it never seems to happen, despite my best intentions.

Well, after I purchased that skein of rather lovely yarn recently I thought I had better finish the scarf I had on the needles.

This was started quite a few years ago now.  Initially, I just knitted it in garter stitch, but wasn’t really happy with it.  Then I found a pattern that I liked the look of, so simply pulled the needles out of what I had started and commenced the new pattern on the second ball of yarn that I had.

It has languished in a box ever since……..

I looked at what I had on the needles now and knew that I wouldn’t finish it and even if I did, I wouldn’t wear it.  Fashions have moved on.  So, I turned my attention to the length of garter stitch knitting and picked up the stitches.

After a couple of evenings of knitting (great for while we were watching the first State of Origin footy game at Mick’s Dad’s) I had a nice long length.  I had a little read on Ravelry and discovered that somewhere about 54 inches was a good length for my needs.

Next, sew it into a circle and I now have a nice, snuggly cowl to wear and don’t feel the slightest bit guilty about starting a new knitting project. 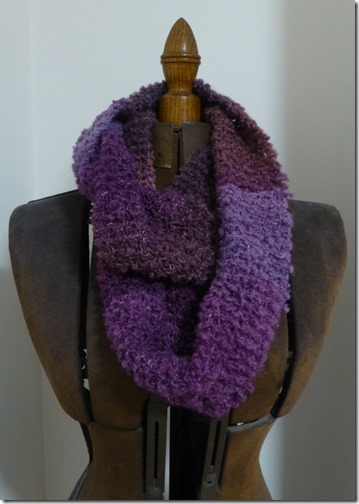 I might make a start while watching the final of the State of Origin series.

So many great patterns on Ravelry, good to have that one finished, I'm sure you'll be using it in Bathurst!

Looks great... wish I could wear something like that, but it doesn't go with my double/triple chin!