Reconnecting in July, August and September

I seem to have slipped up on my monthly Reconnecting posts, so now is the time to get back on track.

As Kris from Tag Along Teddies would say, grab a cuppa, this is a bit of a long ramble.

It has been a bit of a roller coaster time over the last three months, what with one thing and another.

I didn't give a reason at the time for our unexpected return home from South Australia in early August.  Well, Mum, who is in her late eighties, got sick.  Nothing terribly serious, but certainly worrying at the time, which was only exacerbated by the fact that we were a few days away from home in another state. She is now much better.

To cut a long story short, after many convoluted phone calls we were able to have Mum admitted into emergency respite at a local nursing home.  She should have been in hospital, but there were no beds available due to the severe flu outbreak.

After she returned home to her unit two weeks later (she has been living in a retirement village for the last twelve months) she found that she missed the reassurance of having someone on call when she needed assistance at any time of day or night.  As a result we applied for a room in the residential aged care centre next door to where her unit is.

To our surprise she was allocated a room just two weeks after she applied and has now been a resident for just on a month.  The facility had a whole new wing added two years ago and she is in that new section.  The building is beautiful, the staff lovely and caring and the food is great. To our delight she is settling in very well.   She knows quite a few of the other residents, including two of her best friends.  We have taken over a few of her special pieces of furniture and china to make her room more personal.  It is looking rather lovely and homely.

There are heaps of activities on offer and she is getting involved in whatever is going.  She isn't one to want to miss out on things.  I was somewhat gob smacked when I saw her reading a novel.  Mum has never really been a reader, but she has already read a few books from their library.  Of course, her knitting and crochet have gone with her and tomorrow she will attend their knitting group for the first time.  She will be right at home.

So, after that explanation, onto our wrap up: 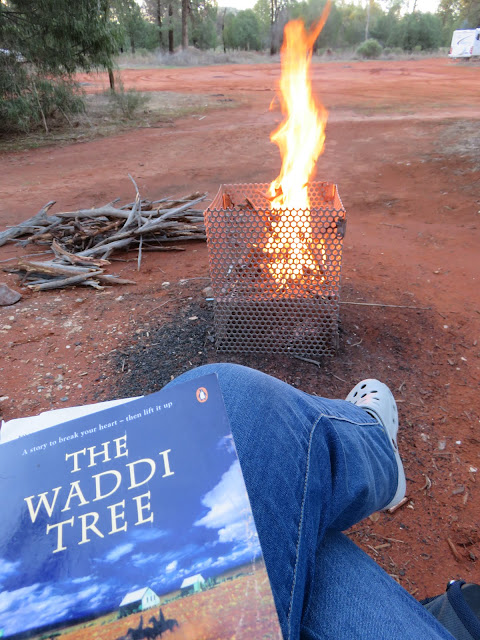 I did read one book while we were in the caravan.  "The Waddi Tree" by Kerri McGinnis which I bought at the Molong Markets.    It was an enjoyable read.  When we were going through all our books I discovered I have two more of her books.  They seem to be autobiographical.  I've kept them aside to read.  I hope they are good.

Other than that, I have started to read "The Orchard Thieves" by Elzabeth Jolly in my lunches, but haven't had much  time as yet.  It was another book from our many boxes.  I can't say that I'm really enjoying it, but I'll keep plugging away and see how it ends ups.  Fortunately, it is a fairly slim volume.

Well, we nailed that!  Just to recap, we headed off on our motorcycle ride around Australia, only to have to return home due to the bike breaking down.  We had a great trip up the east coast and even travelled 80kms further inland from Charters Towers than we have been before!

We then hooked up the caravan behind the ute and headed to western New South Wales and South Australia, which was a real exploration.  Gosh, we enjoyed it.  We were just getting into the laid back way of travelling when we were so rudely interrupted (just joking). 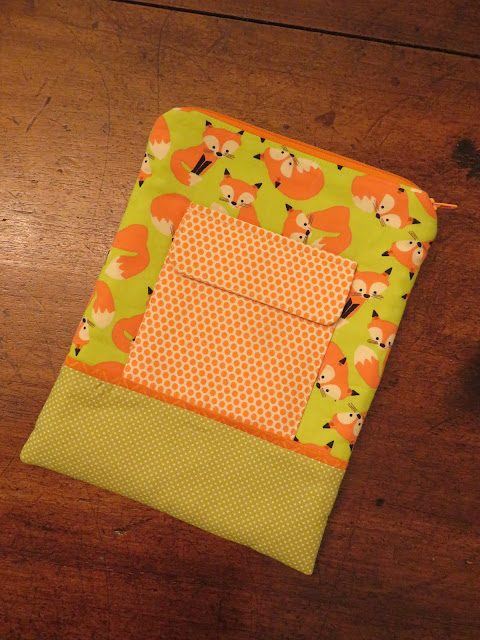 Not much at all.  I made some zippy pouches and an ipad sleeve before our trip, but that is about all. 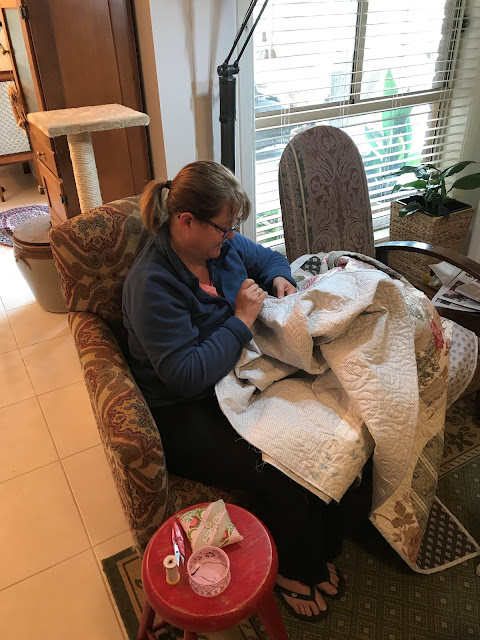 I had high hopes of having a finish for One Project a Month for September, but it didn't happen. Back in August 2014 I pieced a Drunkard's Path Quilt at a retreat at Nundle (can't rush things now) .  I machined the binding on at Chooky's in June this year. There is just under 10 metres of binding to hand sew down.  I've got half way, so there may be a finish by the end of this month.  We'll see how we go.

The Ikea display cabinets were built and boxes unpacked.  More organising, as such, is still required.

We got rid of all those boxes of books.  I'm sure a few went that shouldn't have, but I can live with that.  I look at what I kept and some I wonder at, but that gives me scope to fine tune things in the future, keeping in mind that we want to contain our collection to the shelves in our little sitting area.

We now have a spare room with a double bed.  I still have to go shopping for linen and sort out the wardrobe, but it is a massive improvement on where we were.  Other things just happened to interrupt us lately.

Mum!  Now that took some organising.  We had to organise her health and care, the nursing home, and now we have had to organise to empty her unit.  This was a little easier than it could be in that her house was sold at the end of last year and a major clear out occurred then.  However, it is harden in some ways, as what was left was more important.  It is difficult getting rid of so many things that you have grown up with.  We threw out heaps, things that have served her well over the 55 years since she married, but have now reached their use by date.  I can't fit my car in our garage at present as it is full of Mum's possessions.  We will have a garage sale soon to reduce a lot of it.  I do need to sit and go through things properly and assess what to keep, what to donate and what to chuck.  There are so many family items, so I also need to create an archive of some sort for family.  It is just a matter of determining what to keep and what to let go of.  Wish me luck.

So, now, despite having done some organising, it is a case of one step forward, two steps back.  We'll get there.

Not a lot here really.  With all that has been happening, we have just been taking life as it comes.

I did, however, do lots of cooking before we went on our caravan trip.  Biscuits and slice for morning teas, as well as soups and casseroles for dinners.  It worked really well, and is something we will have to try to do each trip.  It makes life easy, not having to find supermarkets or somewhere to eat all the time and of course saves quite a lot of money.

Continuing on from previous months, I haven't been on my bike at all.  They went to South Australia with us, but the weather wasn't really conducive to cycling.

My three days a week at work has now kicked in properly.  The extra days off have been a blessing, allowing time to run around getting Mum settled.  I'm looking forward to when life achieves a new normal and there will be some time for home things on those days off.  Our time will come.

The major new experience this time was navigating the Aged Care system - My Aged Care, which is the main port of call for many things, DVA, Aged Care Facilities, setting things up to allow me to assist Mum with more day to day dealings, obtaining a disabilty parking permit, etc.  There is a whole new language to learn and so many acronyms to get my head around.  It certainly has been a steep learning curve, but one that many have been through and understand, I'm sure.

Our trip up the east coast on the bike was made so enjoyable by being able to spend time with friends that we don't see often and to also meet Jenny in Townsville for the first time was a bonus.  Friends really are wonderful.

Our trip to South Australia was a nice little taster of caravanning in the slow lane and we can see that it is be something we can really take to, although we were pretty confident about that anyway.  Hopefully we will have a bit more time in the van before too long.

It was nice to wind down on our holiday.  It takes a few days for us to stop racing around, but by the time we were in South Australia we were definitely in holiday mode.

Also, it has been so good having the extra days and time to spend with Mum.  To be able to attend appointments and not be feeling that you need to rush off to do something else, or get back to work makes such a difference.  I think we will get to spend more quality time together from now on.

There you go!  If you have made it to the end, well done.  It has been an interesting three months.   Hopefully the next three will be a little less dramatic.

That's quite a recap about the last few months. I'm so pleased that your Mum is now settled and enjoying her new life, and you must be so pleased she has the care she needs when she needs it.

As for books, I'm quite an avid reader myself. But I'm more ruthless than you - if I can't get into a book in the first chapter or two, out it goes! There are plenty more books out there just waiting to be read.

when you write things down it seems that an awful lot has happened. Glad to hear you mom is settled, a big peace of mind for everyone. lets see that finished quilt!
Hugz

Hi Janice just popping in to see what you have been up to! So pleased your Mum is settling in well! I’m like you with books, feel I have to persevere for a while at least....I think I have only put aside 2 books that I couldn’t finish!

Hi Janice i am so pleased your mum is doing ok and has settled in nicely,a big relief for you and Mick.
I love reading about your travels ,i used to read books but i dont seem to have time now i would prefer to flick through a mag xx

See! There are just some times when you have a lot to share ... & a cuppa never goes astray! :0) Glad you were able to get your Mum settled so quickly. Working in the aged care industry I know it's not easy to find residential care when you need it ... & paperwork!!! Look forward to seeing your finished quilt for OPAMERS? :0) Bear Hugs! KRIS xx