Today is the day when we remember those servicemen and women who have served our country over the years.

As usual, Mick and I headed into town in the dark to attend the dawn service.  It was well attended, which was good to see.

We were in town later in the day and had a better look at all the wreaths that had been laid. The Carillon is quite a spectacular War Memorial. 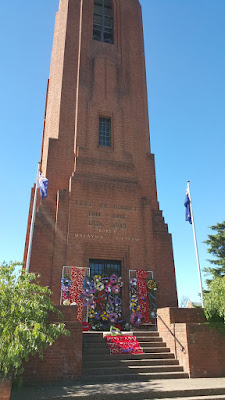 In the afternoon we took Mum out to another service.  I have never attended it before, but it is the one that Mum always attended with Dad.  It is held at the gates of what was the army training camp during World War Two, which later became a migrant camp, through which many "New Australians" passed in the 1950s.  There are several memorials to various army battalions.  My Dad trained there before being deployed to Singapore.

It was a nice service, much more relaxed than those in town.  The weather was glorious, reaching the low 20s.  No one could remember such a nice Anzac Day, normally it is more likely to be freezing cold and wind blown.

I was surprised that the memorial next to the one for Dad's Battalion was on for the 54th Battalion, for both the First and Second World Wars.  Coincidentally, Mum's Uncle Fred served in the 54th Battallion in the First World War. 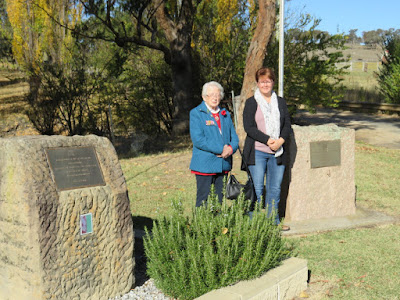 I think Mum really enjoys catching up with all the people who attend this smaller service each year.

Labels: Family, Odds and Sods, Out and About